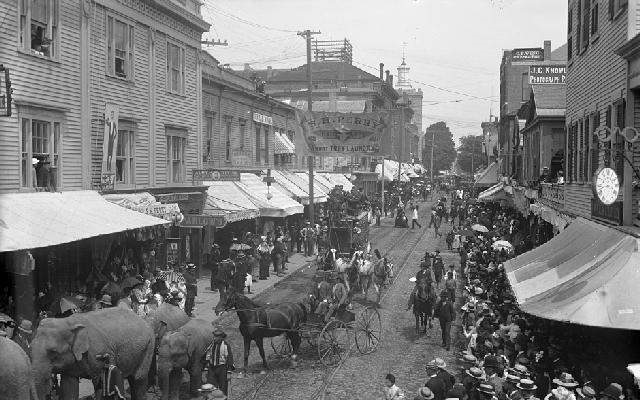 Welcome to our eighth installment of New Bedford Streets; A Piece of Americana. I invite you to read up on the history behind William Street, Kempton Street, Middle Street, Centre Street. Ashley Boulevard, Elm Street and Coggeshall Street. As usual, I’d like to re-iterate the importance of reader feedback, correction, and contributions.

Modest Beginnings
While Purchase Street has always been one of the vending muscles of the city, it wasn’t always as important as it is today. The street wasn’t chosen to be a shopping destination from the get-go. Originally, it had a more modest name: Fourth Street. As whaling boomed, bringing money, jobs and people to New Bedford, the waterfront’s success progressed further into the city. The waterfront was the first stop for many denizens. Any businessman worth his salt would set up shop where the highest traffic was; where those who had money spent much of their time.

Naturally, the waterfront was prime real estate for any types of business, service or trade that would support the whaling industry – skilled and unskilled labor included. Shipwrights, carpenters, masons, coopers, navigators, crewmen, accountants, storage facilities, warehouses, ship supplies, entertainment, taverns, inns; virtually any business would have a greater chance of success close to the money.

To illustrate this point, when one stepped away from the wharves the city’s “first” street was Front Street. While this makes no sense geographically, it does from the city’s perspective. The lifeblood and financial heart of the city was at the waterfront. From the perspective of those that worked and lived here, that was the front of the city. It wouldn’t take long for these businesses to pile up on top of one another and spill and sprawl westward from the wharves and Front Street. The merchants and city’s officials found it prudent and practical to market and promote streets further in.

After Front Street, there were eight numbered streets; first through eighth streets. They still exist today, but a few have been renamed as their function dictated. We still have 1st, 2nd, 6th, 7th and 8th streets, but lost the middle territory. Keeping the names of these streets numbered was practical for giving directions. “Go to the fifth street up and you’ll find a blacksmith.” 3rd street was renamed Acushnet Avenue as traffic opened up and flowed to Cushnea or Acushnet. 5th street was renamed Pleasant Street perhaps because it was meant to be a break from businesses and was landscaped.

First Organizations to Crop Up
The first mention of Fourth Street on historical record is 1792, when New Bedford’s First Post Office was established. The home of William Tobey, the first postmaster, was located on the corner of King and Fourth Street, or what we would call Union and Purchase Street today. The building served as his residence and work. A painting made by William A. Wall in 1807 captures what this spot looked like then. We know the street was still called Fourth Street at least as early as 1834 based on an extant city map. In 1837 an old Unitarian Society’s meeting house became the ever popular and historically important, Liberty Hall on the corner of William and Purchase Streets. The popular entertainment destination is referred to by 1837 as being on Purchase Street. So between 1834 and 1837 the street was re-dubbed. Alas, Liberty Hall and its iconic bell were burned down in a fire in November of 1854, along with a dozen other businesses.

Over the next few decades, the city would continue to burgeon and organizations like the YMCA and St. Luke’s Hospital would have facilities on Purchase Street. A few theaters would also pop up, like the Olympia Theater. Purchase Street (and Union Street) was bloated with churches, organizations, and businesses. Traffic – pedestrian, horse and public transit – would magnify to the point of being a legitimate issue. In addition, if tracks for streetcars and trolleys were to be laid down, the street had to be widened. The street needed to be widened, but this turned out to be a controversial topic.

When Joe isn't writing, he's coaching people to punch each other in the face. He enjoys ancient cultures, dead and living languages, cooking, benching 999#s, and saving the elderly, babies and puppies from burning buildings. While he enjoys long walks on the beach, he will not be your alarm clock, because he's no ding-a-ling.
Previous NB United’s Annual Youth Basketball Registration & Try-outs
Next New Bedford Memorial Day Parade and Services 2013