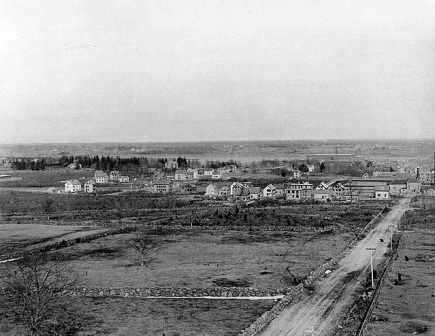 Welcome to our seventh installment of New Bedford Streets; A Piece of Americana. I invite you to read up on the history behind William Street, Kempton Street, Middle Street, Centre Street. Ashley Boulevard and Elm Street. As usual, I’d like to re-iterate the importance of reader feedback, correction, and contributions.

Coggeshall, Coxsall, de Coggeshall
Coggeshall Street is one of those streets I have driven up and down perhaps thousands of times. It’s so familiar that I don’t realize it’s a rather odd sounding name until family or friends from out of town or state visit and mention it. What’s a “Kawg-shawl?” they usually ask. I correct their pronunciation and tell them “I haven’t the faintest beyond it likely being a surname.”

Is it a Hall that was popular and frequently visited and named in tribute to the “Cogges” family? It’s not rare for two words that commonly follow one another to eventually become compounded or even corrupted. For example, Fairhaven-ites have “Sconticanek” for Sconticut Neck. The mouth of rivers when used are slurred into a compound. How do we know someone isn’t local? They will say “Dart Mouth”, with each half been distinctly sounded out, instead of “Dartmyth.” Or they will say “War-cess-ster” instead of “Wusstuh.”

So I began my search for the origins of the name by beginning with its etymology to be on the safe side. That segued into ninety minutes of Anglo-Saxon, Celtic and Roman linguistics and a sizable debate from scholars which I’ll forgo since it is beyond the scope of this article. For some of you it may even be a form of suffering! Suffice it to say that no one agrees on what a “Coggeshall” is. However, most agree that the Anglo-Saxon healh, meaning a nook or hollow, most likely makes up the second part of the name. As was common in earlier times, people began to use the town, hamlet or village they were born or worked in as a surname. Often, it would be a shortened version of where they were from, so Bill of Bedford, would become Bill Bedford. It has been in use in England since the 11th century in its many variants, such as Coxall, Cogshall, Gogshall, and even de Coggeshall. Coggeshall is a town in Essex, England and for practical purposes our story will start there.

Coggeshall, Essex, England
The market town of Coggeshall is located in the southeast of England. This small town, barely 4,000 residents strong has a history going back thousands of years. It’s more prudent if we remain on topic and focus on its relatively recent history. Important to our Coggeshall street is a John, son of John and Ann (Butter) Coggeshall that lived there. We won’t bog the story down with the particulars, but John, and much of his family were some of the Puritans that left England for the New World to escape persecution. He arrived in the Massachusetts Bay Colony in 1632 aboard the same ship that brought Roger Williams only a year before,the Lyon.

While John’s story is actually a darn interesting one, we would need a number of articles to cover him. Being impractical, we’ll just acknowledge that this particular fellow served on a number of committees, and held a variety of offices, including selectman, and deputy to the general court of Boston. Eventually he relocated to Newport, Rhode Island at the suggestion of Roger Williams. There he assumed many leadership roles, such as treasurer, assistant to the governor, and helped form the Colony of Rhode Island and Providence Plantations in 1647. That same year he became chief magistrate of the colony and named its President. He was a central character in the development the two colonies he spent his life in, Massachusetts Bay and Rhode Island in general and specifically that of Newport, Portsmouth, and Boston. Only fitting from a man whose family name is one of the oldest in English heraldry.

When Joe isn't writing, he's coaching people to punch each other in the face. He enjoys ancient cultures, dead and living languages, cooking, benching 999#s, and saving the elderly, babies and puppies from burning buildings. While he enjoys long walks on the beach, he will not be your alarm clock, because he's no ding-a-ling.
Previous New Bedford Guide’s Facebook Page Hits 10,000 Fans
Next Fishermen on Film Explores Fishing Industry at Historic Park