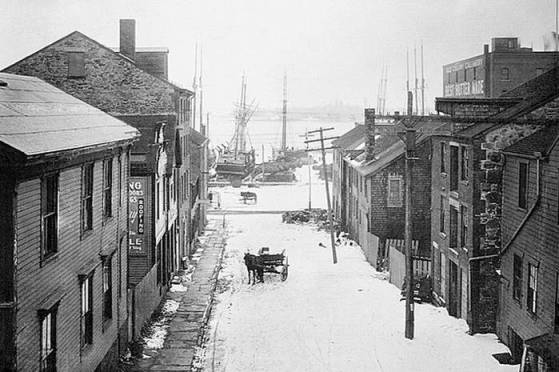 Welcome to our fifth installment of New Bedford Streets; A Piece of Americana. I invite you to read up on the history behind William Street, Kempton Street, Ashley Boulevard and Middle Street. As usual, I’d like to re-iterate the importance of reader feedback, correction, and contributions. In the process of exploring these streets, I try to confirm or validate statements and dates by finding multiple sources. Unfortunately, if all those sources are making their statement based on an older, incorrect source, and there isn’t any dissenting information available, there’s no way to know otherwise. So by all means, please join in!

One of the oldest; Russell, Tallman, & Tryworks
Centre street is not only one of the oldest streets in New Bedford’s history, but one of its shortest, beat only by Rodman Street by a matter of feet. The retention of the British spelling – centre as opposed to center – alludes to the age of the street. The earliest historical mention of Centre street dates back to a time before the Revolutionary War. Centre street had always been an integral part of the commercial heart of the city, full of hustle-bustle and industry. It was a part of the city that was based in practicality and never cared much for aesthetics. It was about bringing in revenue to the city through industries, nothing more.

By 1755, Joseph Russell was already deeply involved in the oil business and within a decade owned (along with William Tallman and Caleb Russell) multiple sloops: the Nancy, Polly, Greyhound and Hannah.

These vessels and many others would use the foot of Centre Street to dock and offload their cargo. They had quick and easy access to Russell’s tryworks located on Centre street.

A tryworks was a facility where whale blubber could be boiled and the oil skimmed from the top. While sounding like an elaborate facility, in this case it merely consisted of a large pot within a shed. By having a land based tryworks, whalers could focus on harvesting whales instead of processing them. Many whalers would try out the oil on the vessel. While it would be an additional cost to use a land based facility, it would free up time to put all their attention on the harvest while out at sea.

Of Rose Alley, Enoch Horton, William Allen Wall
Also before the Revolutionary war, the first candlehouse was erected between Centre and Rose Alley, west of Front Street. This was owned by Joseph Russell and eventually burned down by the British during the war. Western Union Telegraph Company had one of its first offices at the southeast corner of Water and Centre Streets.

Enoch Horton started a bakery at 18 Centre Street circa 1819. The bakery eventually was taken over by Watson & Manchester before Samuel Watson took full ownership. By 1878 Jonathan Buttrick, an apprentice to Nathaniel Tucker began working for Samuel Watson before taking ownership of the bakery when Watson died a year later. This bakery had two brick ovens and a rotary oven. His bread was kept in air tight containers said to last up to 7 years, the perfect ship bread. 17 Centre Street was a writing and ink copying manufacturing plant owned by George H. Freeman.

In William Allen Wall’s “famous” 1805 image of the corner of Water and Williams streets is the following description:

“The road curves to the right and up the hill. At the left is a building with three smoke stacks that is the back of the blacksmith shop that faced Centre Street at this time. On the top of the hill at center is are two houses belonging to two of the most prominent families of the town – William Rotch, Jr. and his wife Elizabeth Rodman, and Samuel Rodman and his wife Elizabeth Rotch owned homes At the right, on the down-slope of the hill are two large business buildings. In the foreground are animals, men, and a horse and cart hauling a cask.”

WHALE
The Waterfront Historic Area LeaguE or WHALE project was responsible for the Centre street we see today. The oldest building on center street, the Tallman Warehouse was one of WHALE’s very first buildings in the Waterfront District to be restored in 1967. They used this building as headquarters until 1995. We would call The Caleb Spooner and Henry Beetle buildings, “Route 18” if WHALE had not relocated them. We now call them 22 and 24 Centre street respectively.

The John Harrison building on 23 Centre Street is currently Kaller Beef. It was built by its namesake in 1820 after the previous building was burnt down. At one point it was the shop of George S. Homer “manufacturer of Sperm, Whale, and Black-Fish Oils. Sperm Candles, Sperm and Whale Soaps, also pure cod liver oil, for medicinal purposes.”

In the early 1970s WHALE had its eyes on the Rotch Counting House on the corner of Front and Centre street. Before the legal paperwork could be passed to prevent its demolition, the Redevelopment Authority destroyed it in the middle of the night.

As can be seen, Centre street may have been one of the city’s shortest, but oh boy was it a BUSY street. The name “Centre” was adopted because this street was smack dab in the middle of the business “mecca” of the industrious city. When whaling began to decline in the 1860s, Centre street, being the heart of the city’s business, suffered as well and many buildings fell into disrepair. The renovation project initiated by WHALE in the early 1960s began to nurse some of these buildings back to health and restored them to the glory and beauty that we see today.

Centre Street Timeline
c1750: Warehouses, candlhouse and tryworks built.
1750: Rotch Counting House is erected on the corner of Front and Centre.
1778: Many buildings burnt down by the British.
1790: Tallman warehouse is erected at 13 Centre along with many of the streets other buildings.
c1804: Henry Beetle House is erected.
1806: Caleb Spooner House is erected.
1819: Enoch Horton starts bakery at 18 Centre.
1820: John Harrison erects his building at 23 Centre.
1822: Stone building at 26 Centre is erected.
1860: George S. Homer opens his shop at 23 Centre.
1967: WHALE restores the Tallman Warehouse.
c1973: Redevelopment Authority destroys the Rotch Counting House.
1976: Alan and Mary Scott have the first Centre Street Festival.
1995: WHALE vacates its headquarters at that Tallman Warehouse.

Special thanks to Spinner Publications and the New Bedford Whaling Museum for the images.

When Joe isn't writing, he's coaching people to punch each other in the face. He enjoys ancient cultures, dead and living languages, cooking, benching 999#s, and saving the elderly, babies and puppies from burning buildings. While he enjoys long walks on the beach, he will not be your alarm clock, because he's no ding-a-ling.
Previous Hollywood Goes Commercial Fishing
Next Fort Taber/Fort Rodman’s First Annual Autumn Revelry