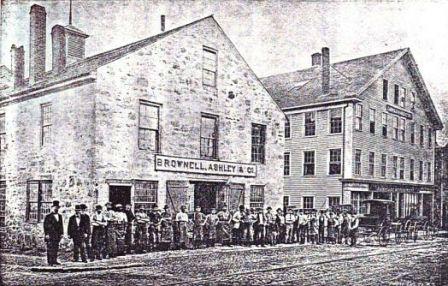 In this installment we will delve into the background of Ashley Boulevard, particularly because it was requested by a reader. I’d again like to re-iterate the importance of reader feedback, correction, and contributions. By all means, let us make this an open discussion to keep the “wiki” accurate. To our more informed readers, and local historians the answer is perhaps an obvious one, however to be sure I had to rule out and other “Ashleys.” Let’s take a detective type of ride through the process of elimination.

The earliest mention in the region of an Ashley that I could find in the historical record was that of Edward Ashley who arrived the region in approximately 1628 and started a trading post in Penobscot, Maine on the George’s River, in what is now Thomaston. An interesting character, William Bradford mentions that he “…lived among the Indians as a savage and went naked amongst them and used their manners, in which time he got their language.” However, he is ruled out because there is no mention of his ever marrying or having children and he was arrested for dealing guns and ammunition to Amerindians…not exactly the type of person to create honorifics for.

From this date onward there are a number of Ashleys mentioned mainly in Plymouth Colony (Rochester and Freetown), Boston and Maine. Most likely the ancestors of the Ashleys that we have in the region today, originated with Joseph and Elizabeth Ashley who settled in Springfield in approximately 1639. The Ashleys that spread through the region did not make it to New Bedford proper before 1790 as they do not show up on the census.

The first mention of an Ashley in New Bedford after the 1790 census is that of Joshua Bishop Ashley, son of John Sherman, born in Rochester in 1820. Joshua Ashley married a Susan Sanderson and they had many children that were born here in New Bedford. Joshua Ashley is the Ashley in the name of the firm Brownell, Ashley & Co, “…manufacturers of fine grades of carriages of all varieties, excepting coaches.” which was started in 1848. This business was located on numbers 24 to 38 Fourth Street. Here is the beginning of the Ashley family name’s journey to prominence.

One of approximately nine of Joshua and Susan Ashley’s children, Charles Sumner Ashley was born in New Bedford on September 5, 1858. Here we have our “culprit.” Charles graduated from Parker School and Friends Academy. Instead of heading to college as his parents wished, Charles had business ambitions and was involved in many business ventures including Covell & Ashley on Purchase Street, dealing in produce and general goods and Ashley & Pierce Clothing & Furnishing Goods on 72-74 William Street.

When Joe isn't writing, he's coaching people to punch each other in the face. He enjoys ancient cultures, dead and living languages, cooking, benching 999#s, and saving the elderly, babies and puppies from burning buildings. While he enjoys long walks on the beach, he will not be your alarm clock, because he's no ding-a-ling.
Previous Prometheus Movie Review
Next Seven Must-attend Events for June AHA!