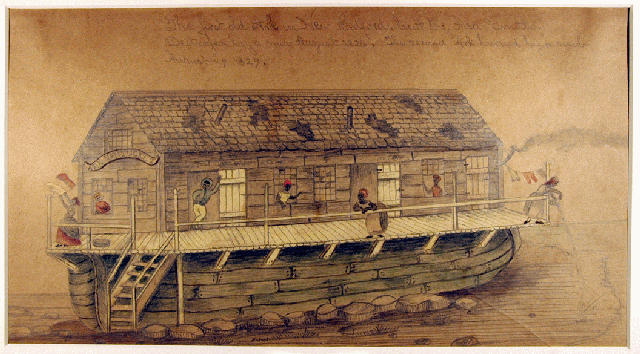 The Story of New Bedford’s Arks; Of Sketchy Denizens, Mob Violence and the Hard Dig Neighborhood

Once upon a time, or in the 1820s to be exact, there was a brothel run out of the shell of a whaling vessel right here in New Bedford. This city has been a chameleon of sorts over the centuries being famous or infamous for a variety of commodities, industries, and shall we say activities of the constructive and base kind.

New Bedford’s Early History and Crime
As with any city that is economically sound, money will attract both good and bad elements and it was certainly the case in the 1820s. New Bedford had its share of gambling halls, brothels, saloons, ruffians and rogues of varying degrees. At many points throughout the city’s history these bad elements got so bad that people resorted to mob violence to fill in the void due to the police department’s lack of manpower, ability or in rare cases desire. Surely corruption played at some level.

By 1826, the time this tale takes place, New Bedford’s population reached approximately 6,000 people. For comparison, Boston had approximately 50,000 people and New York City around 150,000 people. New Bedford at this time was entering one of what would be many stages where it was infamous for this bad element. One could cynically say that this character trait has always been a part of New Bedford and the two have never been separated.

It was during this time that one neighborhood in particular stood out for these exact characteristics. The neighborhood was called the “Hard Dig” and centered where Kempton Street would meet the waterfront, if Route 18 and Route 6 weren’t there. Water Street, and the streets called High Street and Charles street that are no longer present, were also streets that were part of the “Hard Dig.” High Street met at the foot of today’s Fairhaven/New Bedford Bridge. While High Street and Charles street have separate names, High Street was technically an extension of Charles Street. This street ran parallel and south of Kempton Street.

The Camillus on Ark Lane
At the foot of Water Street and High Street was a peculiar building. This building was odd enough that the street it laid on and that Water and High street abutted, was called Ark Lane. The name hints at this odd structure. The building was called the “Ark” because this residence, unlike any other in the city was a sea vessel called “The Ark” that became too old and unsound to be considered seaworthy. The Ark was broken up and it’s stern or rear portion was merged with an old whaling hulk, called “The Camillus.”

Atop this odd structure a house was built, with a four foot wide walkway circling it. One set of stairs permitted egress. The ship/building rested on the shore at the water’s edge, was kept upright by keel blocks and high enough so that when high tide arrived it would not set it afloat.

Originally, it was said the unnamed occupants were “…decent people of moderate means.” However, the city had other plans. “Progress” could not be halted. It’s not stated how or exactly when the building made the leap from residence to brothel, but considering the neighborhood that it was in, it was seemingly inevitable. The general populace who considered themselves morally upright and decent folk, found this brothel (and neighborhood) objectionable and abhorrent. A one Jake Peterson was said to be “…the leader of the place.” implying his status as a local crime lord or kingpin and he figures into the story a bit later.

The Hard Dig Neighborhood
It wasn’t uncommon in the “Hard Dig” for people to turn up missing and so the story of a ship’s carpenter having disappeared didn’t stand out as particularly disturbing news. On one of the hot August summer days of 1826, a number of boys were out harvesting Huckleberries, a fruit very similar to a blueberry, in the woods near the “Hard Dig” neighborhood. While doing this, echoing Stephen King’s novel “The Body” or the movie “Stand By Me”, they came across the body of a dead, adult male – our missing ship’s carpenter. This sent the boys into a tizzy and they raced back into town to inform the officials of their morbid discovery.

In the few short minutes, it took the boys to run into town, inform the authorities and for the group to arrive, the body had been removed. However, the offender or offenders that carried the body away knew that they were pressed for time and in their haste, they left enough evidence behind to remove any doubt that there was indeed a body.

Apparently, the police department was either unequipped or uninterested in following up on this crime. Perhaps they felt it was yet, just another crime in a crime-riddled area that no one particularly cared about. Perhaps, they didn’t work at a frantic enough pace to the populace’s liking. Either way, a number of people were fed up and were determined to take action and do something. That evening a mob formed on Kempton street in spite of attempts by others to “read the Riot Act” or stem the growing mob. This mob took up stones, pick axes, ladders, crowbars, and anything else they could get their hands on.

An Attempt to burn down the Ark; Mob Justice
The first thing they took their angst out upon was Jake Peterson’s residence. Using sheer manual manpower, they smashed the building until it collapsed. Fueled by their quick success they continued on to other buildings owned by less reputable citizens and within two hours had been responsible for substantial damage in the “Hard Dig.” Records indicate that fires were allowed to burn freely and that the fire department was present, but only took action to save surrounding residents. We know this since a Capt. Joseph Wilcox, Jr. from the fire department had said as much.

Wanting a coup de grace to cap off the night, some proposed destroying the Ark. However, having been a night filled with arduous work, with fatigue settling in, and out of respect for of the death of a baby of one of the prostitutes, they decided to take action the following evening.

This gave those who “worked” the Ark fair warning of the mob’s intentions and allowed them to prepare to defend themselves. They took up anything that could be thrown and prepared a sufficient amount of scalding hot water to dump on anyone. A Timothy Griffin tried to disperse the crowd with another failed attempt to read the Riot Act. The mob continued where they left off from the evening before and began to smash, burn, and demolish.

After a give and take battle, the mob brought forth a cannon, loaded a cartridge and threatened the occupants. However, this was a bluffing maneuver since the cannon was a “Quaker’s” cannon or a cannon that did not actually fire anything in compliance with their tenet of non-violence. Their tactic worked and the occupants abandoned “ship” and the mob immediately seized upon the “Ark” with the same fervor they had the previous evening. They made short work of the Ark with their crowbars, ladders, axes, and other tools and the Ark was utterly destroyed.

These actions resulted in a few score individuals being summoned to give account at court in Taunton. However, everyone involved claimed to have seen and heard nothing.

When Joe isn't writing, he's coaching people to punch each other in the face. He enjoys ancient cultures, dead and living languages, cooking, benching 999#s, and saving the elderly, babies and puppies from burning buildings. While he enjoys long walks on the beach, he will not be your alarm clock, because he's no ding-a-ling.
Previous A Taste of Hawaii in New Bedford
Next Review: Al Green at the Z