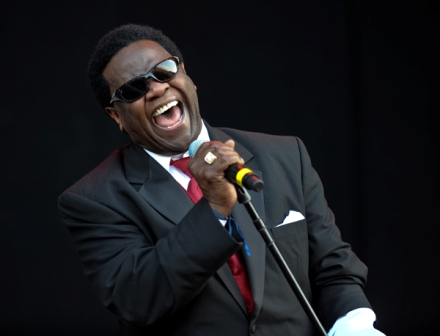 Review: Al Green at the Z

On August 26th, the Zeiterion Theatre had the honor of hosting R&B/Soul legend Al Green. The Reverend Al Green is one of those guys that you know more songs from than you think you do. The big hit was “Let’s Stay Together”, but he had THIRTEEN Billboard Top 40 hits! “Let’s Get Married”, “Love and Happiness”, “Here I Am (Come and Take Me)”, “Take Me to the River” (no, that was NOT a Talking Heads original!), and many more.

Your Intrepid Reporter arrived at the concert 15 minutes late (I had to attend a goodbye party for a friend moving to China, is THAT a good enough excuse for you???), so I missed half of Al’s opening act, Jesse Dee. This was a good thing. Although the Boston Globe described him as “A mix of John Legend, James Hunter and Al Green”, I beg to differ. I found his music to be blandly Adult-Contemporary, his band soulless, and I was happy when he left the stage. (In his defense, I stumbled upon a performance he did at the Regetta Bar in Cambridge on YouTube, and it was pretty damn good. Perhaps he was having an off night?)

Al came on to much applause and genuine love, looking very dapper in a black suit and sunglasses. He was not afraid to feature members of his nine-piece band, including his guitarist, keyboardist and horn section, giving all their names and letting them solo. Especially his second keyboardist, who was from Boston (this got thunderous applause, and screams of pride). His four-piece back-up singers featured three women…all of whom were his daughters! The Reverend showcased them on a version of “Amazing Grace”, having them sing this classic very quietly and then loudly, which they did in effortless beauty. 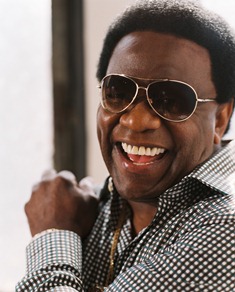 An ordained reverend since 1976, spirituality did play a part in his performance. Especially when he informed us, “I’m a child of God, I can make you dance!” (If all Men of God were like him, you’d be in church every Sunday, wouldn’t you?) Al thanked the Lord for letting him perform music for FOUR decades, and counting.

At 67 years old, age had not diminished him, just lessened him, slightly. He EFFORTLESSLY hit all the high notes in his hits. After holding one note for awhile, he informed us, “See? You have to still hold it!” He did stop twice, putting his head down and his hands on his knees, catching his breath before the next onslaught. Nevertheless, the show ran an extra 15 minutes. “As you can see, we like to rock”, he said, after turning “Love and Happiness” into an extended jam, bringing the horn section to the front of the stage.

The audience, although not at capacity, loved him. Many people left their seats to come to the front right side, to snap pictures and dance (maybe I was with them….for most of the concert). I’ll never forget the older lady in the wheelchair, jamming in her chair and loving Al even more than the rest of us. Al proved to be the consummate gentlemen, hanging out long-stemmed roses to the ladies in an unlimited supply. He asked “May I come back again?” and we screamed “Yes!” and women threw their underwear on stage (I might be remembering this wrong).

After multiple shouted requests, Al finally got to “Let’s Stay Together”, encouraging the audience to “sing along.” Although Al didn’t have the energy to move like the old days, he had two backup dancers to keep the energy up, as well as the audience.

Some of the more mind-blowing parts of his performance were covers. From his left-field version of Roy Orbison’s “(Oh) Pretty Woman” (one of my favorite artists), to his wonderful medley of Motown classics: “Sugar Pie, Honey Bunch”, “Sitting on the Dock of the Bay”, “Can’t Get Next to You” and others.

After missing James Brown a few years ago, (and only a few months before he died), my New Year’s resolution this year was to see as many of the all-time greats as I could before they passed on. With recent guests like B.B. King, Al Green, Buddy Guy and Joan Rivers (I missed her winter performance, regretfully), the Zeiterion Theatre makes it EASY. Any chance we can get the Isley Brothers, Z?