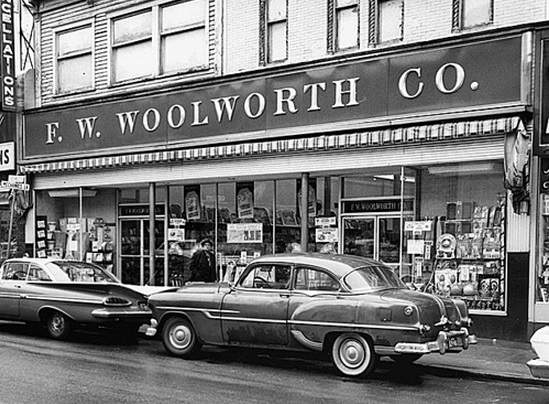 Time for another stroll down memory lane. If you enjoy this article and wish to take more of these strolls, to your right you will find the both a search box and a category sorter. In previous articles we’ve discussed The Peanut Shop, Mars Bargainland, Mitchell’s Fish & Chips, Bob & Eileen’s, etc., as well as ten of Fairhaven’s Forgotten Landmarks like the Drive-Thru, Water Tower, A&W, Barbero’s, etc.

As always, we encourage correction, discussion, and anecdotes. Memory isn’t always reliable when it comes to specific details.

Throughout New Bedford’s History there have been a few Woolworth’s Five & Dime Stores. At least three – one on South Water Street, one on Purchase Street and one on Fish Island. I vaguely recall a few visits when I was a child to the Purchase Street store. The genius of Woolworth is that my mom could leave me at the counter with a grilled cheese and something from the soda fountain while she shopped unmolested. What’s a soda fountain, you say? If you don’t know you’ll have to ask mom or dad!

I remember the toaster machine, the hair nets, and the malted milk. Woolworth’s back then was known colloquially as the “Five & Dime”, which was a clever way of saying a store where you could buy things very inexpensively. The term “Five & Dime”, believe it or not was coined – pardon the pun – to describe a store-wide policy to charge only a nickel or a dime for all products within the store. Of course, inflation had other plans.

The younger generation thinks that K-Mart and Wal-Mart had an original idea, but Woolworth’s was a department store far before either existed. Thread, clothes, drugs (no-not those kind), sport’s goods, silverware, shovels, etc. You name it. You could buy a variety of goods and take a break for a meal at the eatery. Nowadays, the soda fountain has been replaced by a Little Caeser’s or Starbucks, but the concept is the same.

40 cents for a ham and cheese (“You will like it!”), 20 cents for an orange juice, and 25 cents for a Banana Split. You could buy a “Hamburger Sandwich” and have it with some “French Fried Potatoes”!

Frank Winfield Woolworth opened his first “Woolworth’s Great Five Cent Store” in Utica, New York, on February 22, 1878. By 1904 there were 6 stores from New York to Canada and 8 short years later in 1912, there were almost 600 stores! By 1997, the chain went out of business, but kept it’s sporting goods or shoe-ware division going. What is the name of the division today? Foot Locker!

What are your fondest memories of Woolworth’s?

When Joe isn't writing, he's coaching people to punch each other in the face. He enjoys ancient cultures, dead and living languages, cooking, benching 999#s, and saving the elderly, babies and puppies from burning buildings. While he enjoys long walks on the beach, he will not be your alarm clock, because he's no ding-a-ling.
Previous The South Coast Hot Jobs List – 25 September 2013
Next New Bedford Economic Development Council Director To Take On Wind Energy Role