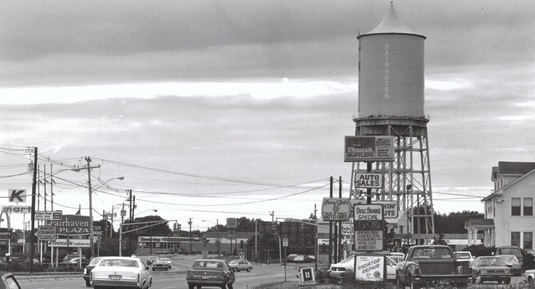 Having grown up in nearby Fairhaven during the 80s, I was excited to come across a video on YouTube of a car filming Fairhaven as it went along Route 6. After a good 30 minutes of rewinding, pausing and exclaiming “Hey!” I thought to myself this is something that HAS to be shared. I can’t recall how many times I have reminisced with friends about all our favorite establishments growing up. To accompany the video, I thought it would be fun to bring up all of the favorite spots that I could recall. But since my memory is pretty dismal, and since a two way conversation is so much more interesting, I was hoping that the readers could chime in with corrections or additions. So without further ado, and in no particular order let’s take a stroll down memory lane!

1. Fairhaven Water Tower
This water tower stood near where Burger King is today. It was built in 1902 and replaced an earlier one that was erected in 1887. It’s first incarnation was one of the first elevated water-tanks with a curved bottom ever erected in the country and one of the largest of the type built up to this time. After it’s rivets let loose the water tower burst on November 19, 1901. A year later the new one was erected, dubbed Baby Blue and lasted until 1988.

2. A&W
A&W Root Beer was where Honey Dew donuts stands today and had those famous Root Beer floats that we all loved so dearly. There was something special about their root beer that they have been brewing since 1919. It was the site of my first Bacon Cheeseburger. There was no other burger “joint” you could go to and have a hamburger and a hot dog!

3. Barbero’s Pizza & Sub Shop
This was THE spot for pizza in Fairhaven for the longest time. I vaguely remember the variety of toppings, but remembering there being a lot to choose from. I didn’t like thin pizza anywhere else. Barbero’s always loaded their pies with generous amounts of toppings. Save 10 coupons and get a FREE pizza! WOO HOO! This was my brother’s favorite place to eat whenever he would get a break from military duty. We always bee-lined it for Barbero’s. This was right next door to A&W and there was even a mini-golf course right next door, but don’t recall whether it was a separate business or part of Barbero’s. They closed their doors in 1998. If you want a ton of great old photos of Barbero’s there is even a “Remembering Barbero’s” Facebook!

When Joe isn't writing, he's coaching people to punch each other in the face. He enjoys ancient cultures, dead and living languages, cooking, benching 999#s, and saving the elderly, babies and puppies from burning buildings. While he enjoys long walks on the beach, he will not be your alarm clock, because he's no ding-a-ling.
Previous That Old Paskamansett Landing
Next New Bedford’s Forgotten History: Market Square and “Cheapside”