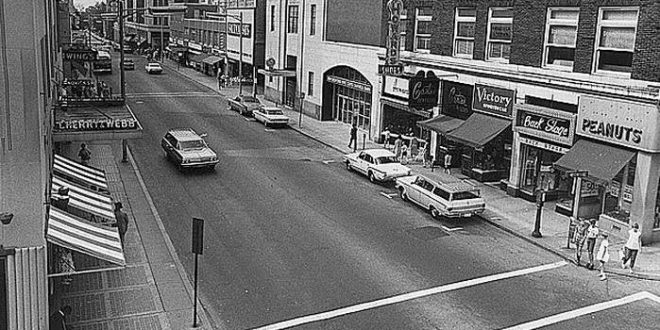 Notice the Peanut Shop where 'No Problemo' is today! (Spinner Publications)

Welcome to the third installment of the “Who remembers…?” series. In the inaugural article we reminisced about Virginia Dare Soda and in the second we took a stroll by Sunbeam Bread. My intention with this series of articles is not just to invoke nostalgic memories for those of us who have been “there”, but to share with the newer generation positive things that made up our childhood. Of course, sharing the area’s history is a way to not let the good things that have happened in the area pass away to be forgotten forever.

More importantly is discussion and contribution from readers. Everyone has an anecdote to share that makes these articles special. The Virginia Dare article was read, shared, commented on and liked by thousands and the Sunbeam article was even more popular. There was a nice sense of community and it resonates with many of you folks out there. There is something about reminiscing that serves as a sort of therapy and relief from the stresses of the day. You sort of travel away in your head and leave the world behind even though for a few moments.

Just like Sunbeam Bread, Joe Jesus’ Peanut Shoppe evokes instant phantom aromas. For those of us who have…ahem, been around a while, the familiar scent of peanuts roasting was a fond one. Whether you were coming up Union Street, William Street or traveling along Purchase Street it was only a matter of time before conversation was halted or interrupted by that mouth watering inducing aroma. Who can smell it right now?

Joe Jesus was the fellow who brought the three Planter’s Peanut shops to New Bedford. He had three locations at one point, on 200 Maryland Street, 813 Purchase Street (now the No Problemo Taqueria) and across the street from the Bristol Building, which he also owned. The affable Mr. Jesus was commonly called Mr. Peanut and it was a common sight to see him handing out small bags of freshly, roasted gems to children getting dropped off by their school bus, inclement weather be damned. Immediate drooling would ensue and the tiny bag’s contents virtually inhaled in moments. There was something special about walking down the street with a great pal in tow, and chomping on Mr. Peanut’s freebies. It placed a stamp on one’s memory and regardless of how inane or mundane the topic of conversation was, you remembered it for months to come. “Hey remember when we were talking about who would win in a fight Spiderman or Superman and Mr. Peanut gave us a bag of peanuts?”

Two years ago New Bedford Guide sent Edward C. Dugan to interview Mr. Peanut in a spotlight article. When asked about his early business success he quickly brought up his peanut shops:

“I bought the Bristol Building in 1978, and I owned a peanut shop. Everybody loved the peanut shop talked about it” says Joe. “We turned on the roasters at 10 a.m. The aroma was all over the street.The high school was at the top of the hill on County Street. The kids would come from school and they would catch the bus on Purchase Street at either Cherry’s or Merchant’s Bank. Both were close to the peanut shop. The “Peanut Man” would sometimes give peanuts to the kids. At Christmas time I would buy one pound tins. By the time all of the doctors, lawyers and businessmen had bought a tin for their secretaries, we would have sold thousands of them. Not just in New Bedford, but all over the area. At one time I had three shops, but it was too difficult to keep up with them all.”

Joe also admitted that he intentionally placed the roaster in the window and placed a fan underneath it that blew the aroma out a vent and into the streets. The last Peanut Shoppe was closed down almost 10 years ago, however bringing it up in casual conversation gets everyone to smile and stroll down memory lane. Do I have to ask? Who wouldn’t love to have Mr. Peanut back!??!

While digging through a number of photo resources I used every keyword possible. From Joe’s name and nickname to street names and variations of spelling on “Peanut Shop.” I checked the Whaling Museum’s Flickr and website database, Spinner’s online photo collection, Flickr in general, and Google image search. Alas, I did not come across a single photo of the shop during operation. So I took some liberty with the photos in this article, since people simply love old photos of the area. Having said that, I have always made it clear that there are many far more knowledgeable local historians in the area. I would much rather prefer a two way discussion that be an orator. So PLEASE, by all means, share your anecdotes and if you have an image of the Peanut Shoppe in operation we’ll place it at the header of the article and give full credit of course.

As usual with these old photos I would like to thank the always generous Whaling Museum and Spinner Publications for their use!

When Joe isn't writing, he's coaching people to punch each other in the face. He enjoys ancient cultures, dead and living languages, cooking, benching 999#s, and saving the elderly, babies and puppies from burning buildings. While he enjoys long walks on the beach, he will not be your alarm clock, because he's no ding-a-ling.
Previous Remembering The Michael Bianco Inc. Raid
Next Spring Dance Series for Seniors