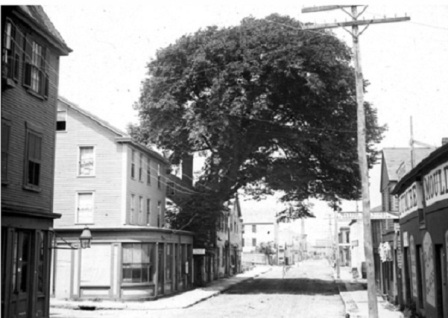 Welcome to our sixth installment of New Bedford Streets; A Piece of Americana. I invite you to read up on the history behind William Street, Kempton Street, Middle Street, Centre Street and Ashley Boulevard. As usual, I’d like to re-iterate the importance of reader feedback, correction, and contributions.

Many of the previous articles revolved around streets that required a lot of detective work, the origins were dubious, and/or when the origin was clear, the article required a fair volume of research. In the case of Elm Street, the origin is very clear and really altogether not that complicated. However, what I thought would be a simple, clear, and relatively light article to write turned out to be the opposite as it often does! It turns out there is quite a bit of history on Elm Street. In fact, too much to cover in one article. So I hope the reader will forgive me for taking liberty in cherry picking the historical moments.

Many streets are a tribute to an historical figure – mostly local, but at times national – or even hearken back to sovereign England. Sometimes the streets are named because of the street’s primary function or placement, like “Centre Street”, “Middle Street”, or “School Street.” Which, though I digress, has made me often wonder why New Bedford has no “Main Street.”

From humble beginnings
There is no mystery about the origins of Elm Street. Elm Street is one of the oldest streets in New Bedford’s history with official mention of it going back to as early as 1805, as sourced from Ricketson’s book. It was named after a particular Elm that grew on the street. It wasn’t removed when the street went up. It was respectfully allowed to stay. The street was laid and buildings were erected around it. While the Elm tree was a favored tree back then, just like the Maple is in Canada, what remains lost to history is the reason for honoring this specific elm tree so early in the city’s beginning.

Was it a landmark? Was it a favorite spot to find shade? Was it just a healthy respect for nature by the city planners? We may never know.

Elm street was at the heart of New Bedford during its first years. It shares its inception with the first streets, Union Street, Front Street, Centre Street, Water Street, etc. It wasn’t that far away from the Kempton farm and the bustling waterfront, so Elm Street played a pivotal role in the city’s growth early on. Indeed, one of the first spermaceti candle making facilities was Rodman Candleworks on the corner of Elm and Johnny Cake Hill built in 1810. This is a time when New Bedford still included Fairhaven and had approximately 5,500 people.

Elm Street was and still is a lengthy street and as it leaves the business hustle and bustle near the waterfront became a popular area for residents. People like Joseph Russell (129 Elm Street), Francis Hathaway (Hathaway Homestead on corner of Elm and Purchase), and Daniel Ricketson chose Elm Street as a residence. The MacLeod building was named after business mogul, Everett B. MacLeod who came to the city in 1805, started a retail clothing store based on a credit plan. He was so successful, and enlarged his store so many times that he simply went ahead and bought the entire block at the corner of Elm and Purchase streets.

In 1829 the Elm Street M. E. Church was set on fire, sparking riots and mob violence. This was blamed on the owners and frequenters of the infamous Ark which we detailed a few months back. You can read all about this major, fascinating event in the article The Story of New Bedford’s Arks; Of Sketchy Denizens, Mob Violence and the Hard Dig Neighborhood.

It was also a street that had a number of popular spots like the Elm Street Society of Methodists, the Empire Theater (118 Elm Street), the Lion Theater (Elm and County), Mr. Holmes’ Meeting House (Purchase and Elm), and the Elm Street Pool Room.

The Circus versus the Quakers
In the 1820s to the chagrin of New Bedford’s conservative Quakers a 6 days a week circus Buckley, Weeks & Co., opened up on the northwest corner of County and Elm Streets. The circus was so despised, and pressure from the Quakers so great, that selectmen stopped granting licenses to the managers of the circus and forced them to move towards the Dartmouth line. The conservative Quakers were against anything theatrical. Officials eventually relented and the circus continued, and the amphitheater they performed in was even visited by the New York Zoological Exhibition and a Columbian Circus.

By 1836 “The Lion Theater” replaced the circus which even ran some Shakespeare plays. Yes, Shakespeare in New Bedford! More pressure from the conservative Quakers forced the selectmen to again refuse licensing for a ten day period before relenting. In 1840, the pressure was so great that the city voted for theatrical licensing 12 in favor and 566 against. Imagine that.

The famous John Snow Stable was a popular destination before the automobile. This was located on the corner of Elm Street and Acushnet avenue in the 1840s.

Arson, Burlesque and Elvis
In 1859, an arsonist set fire to William A. Nash’s carriage factory, which spreads to Hathaway & Brother Stables causing 67 horses to be cut free and run about the city. I tried to find images of what had to have been a spectacular sight. Andrew J. Dam’s Billiard saloon and bowling alley was next to burn as the fire spread, then on to Joseph Linton and L.G. Carpenter’s blacksmith shops and a few other buildings on Mechanics Lane including the Union Boot and Shoe store and the City Guard station at Mechanic’s Hall though these last buildings were saved.

By 1922, the hold on theatrics in the city by conservative Quakers was virtually gone and the Empire Theater was built on 118 Elm Street. It originally hosted music shows, comedy acts, and dance events before the Zeitz purchased it and turned it into a movie theater ten years later. It was a popular destination for decades following and it closed its doors with its last showing of the musical film adaption of the Lerner and Loewe stage musical “My Fair Lady” starring Audrey Hepburn in 1964. It remained closed for one year, resurrected for one live burlesque performance of “Those wonderful Days of Burlesque” before closing for good.

To illustrate the change of times, on September 24, 1957 five teens got 6 months probation for hooting and hollering as they impatiently waited for Elvis’ “Jailhouse Rock” to be released. I doubt we’ll see any kids get 6 months probation for hooting and hollering while waiting for the new One Direction video. Those teens who possess a criminal nature have elevated their activities just a wee bit since then.

The Elm?
So Elm Street begin with a specific tree, respectively grew around the tree as the city’s fortune ebbed and flowed, before finally being removed or dying. It may have perished when Dutch Elm disease came to the U.S. in 1931. It may have been blown down in a hurricane. Or it may have been removed by the city. I would hate to have been in the city crew that had to go and remove this connection to the city’s past if that was the case. It’s sad that the tree even had to go, and even sadder if the maxim that progress can’t be stopped won the day here. The sheer size of the tree and angle it grew at makes me lean towards a hurricane or high winds blowing it down. If you heard a story, a rumor, or know how the Elm tree of Elm street disappeared, PLEASE share!

Special thanks to Spinner Publications and the New Bedford Whaling Museum for the images. I can’t say enough about the generosity and kindness they have both extended. If you enjoy these images, you are in for a real treat by visiting their websites or the Museum. They also have a gift shop and some great publications for sale that will make FANTASTIC Holiday gifts!

When Joe isn't writing, he's coaching people to punch each other in the face. He enjoys ancient cultures, dead and living languages, cooking, benching 999#s, and saving the elderly, babies and puppies from burning buildings. While he enjoys long walks on the beach, he will not be your alarm clock, because he's no ding-a-ling.
Previous Winter Wonderland Holiday Open House
Next Community Input Session Planned for Custom House Square Project