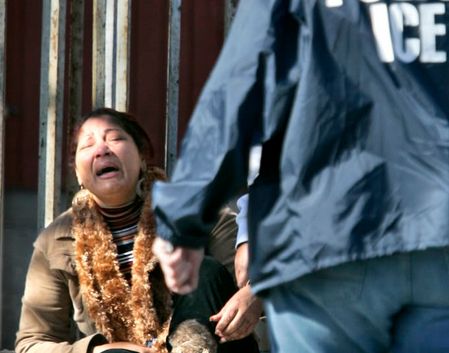 On the morning of March 6th, 2007 the lives of children and families were ripped apart at the hands of federal immigration agents.  The incident made national news coverage, but its harsh impact occurred right in our own backyard.  On that morning, Michael Bianco Inc., a highly established leather factory, was raided by an army of 300 immigration officials. During the raid, 361 illegal workers were arrested and detained.  Since then, opposing opinions have been at the forefront of the immigration debate. However today, reflecting on the raid doesn’t just speak to the issue of illegal immigrants.  It brings to light something far more challenging – how the issue should be handled.

“But they were illegal…” Is this the only narrow thought in peoples’ minds?  While illegality was certainly the primary focus of the raid, there was an entire failure to see the moral and social issues involved.  These were people with families and children to feed.  At the time, immigration officials addressed specific provisions they had made to ensure that children were not left alone. Then, a few days later Massachusetts’  Governor Deval Patrick categorized the raid and its aftermath as a “humanitarian crisis.” Most of the arrested workers left behind families that were dependent on them.  A large majority were women, leaving children stranded at day-care centers, at school, or with the babysitter.  For days, many children were without homes, while no other family members existed to claim guardianship over them. Two infants were hospitalized two days later for dehydration from lack of their mother’s nursing.

Adding to that failure, the workers of Michael Bianco Inc. faced incomprehensible harassment. Immigrants whom were present shared chilling stories of what happened during the raid.  According to witness accounts, immigration agents charged into the factory, screaming and yelling for the workers to turn their machines off.  Many were scared and confused, while others knew exactly what was happening.  They attempted to flee the scene and failed.  Not only were there officials inside the factory, but helicopters monitored those fleeing on foot from overhead.

Workers were beaten to the ground, and handcuffed.  Men and women sat on the floor for hours, watching as agents gave each other ‘high-fives’ and congratulated themselves on their ‘success.’  One woman recalled asking for water after nearly seven hours of waiting. She was given one small water bottle to share with twelve other people.  Later, she states, “I saw that a girl had fainted.  She was on the floor.  She was on the floor and everyone ignored her.  Then she sat up and they put a box in between her legs and she vomited and vomited into the box.  After all this, they took her to Boston, but people say they took her to Houston.  They handcuffed her hands and feet and put her on the plane and they tied her waist.  They treat us like as if we were murderers.”

What can we gain from this? This incident proves that despite advancements in the debate, harsh, cruel, and inhumane treatment exists.   We can scream “But they were illegal” until we’re blue in the face.  Whatever our opinions are, they shouldn’t justify the acts that took place on March 6th. Lives were destroyed, families were torn apart, and countless numbers of children were left abandoned.  Harsh enforcement will only encourage illegal citizens to remain silent and hide in the shadows. So many barriers exist and trying to ask why someone remains illegal is pointless. What we need to do is question our response to the inevitability of illegal immigration.  We need a plan that supports a pathway for legalization. We need to promote ethical and moral treatment as crucial building blocks for change. If the Bianco workers were illegal, fine, take action… But what happened on March 6th at the Bianco factory went beyond simply enforcing the law.  We need to act, but this can’t be the only way.

This article was meant to provide an additional perspective on the issue. And in fact, I believe that these individuals SHOULD face legal sanctions. I do not condone illegal immigrants hiding in the shadows of our neighborhoods, however the article is meant to highlight why perhaps, these individuals remain in hiding. They fear entering the system, for the fear that they will be abused, mistreated, and tossed out of the country – back to lives and places that we in America often can never begin to comprehend. The “stigma” that today exists across America is what causes law enforcement agents and administrators to respond in such a way. This ‘let’s catch em and show em a lesson’ mentality is woven into the very notion of “illegal immigrants.” As a result, people are mistreated – as in this case, terribly – and what results is a violation of basic humanity. So again, I reiterate, I do believe these individuals should be held accountable, however no child should be abandoned nor should any person be beaten, handcuffed, and spat upon by those who are supposed to uphold to the highest standards of virtue in our nation. No one, especially not myself, has said anyone breaking a law in our country should get a free pass. We need to change the response and the handling of the issue. That’s it.

Proud Southcoast, seaside native; Advocate for women's empowerment, leadership and success with special interest and expertise in writing, social media, PR, and communications; Lover of books, life, and all things fabulous.
@@AshleyBendiksen
Previous Make Pinwheels with Abby, One of the 1850s Ladies
Next Who Remembers…The Peanut Shoppe?