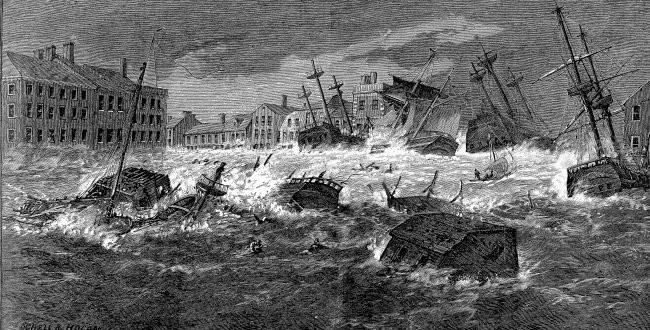 We often think of hurricanes as a modern phenomenon. In fact, we associate natural disasters of all sorts to be a modern development, especially in light of global climate change.

At one point tsunamis that wiped out entire cities and were responsible for the deaths of tens of thousands of people, weren’t thought within the realm of possibility…until the catastrophic Indian Ocean earthquake and subsequent tsunami of 2004 which resulted in worldwide devastation and the death of a quarter of a million people. Once that event unfolded, it shed new light on historical documents that detailed similar cataclysmic tsunamis that were thought to be fabricated or exaggerated.

We now know better. Events of this magnitude have happened throughout the history of mankind and will indubitably continue to happen – with or without global climate change or whichever side of it that you are on. They are inevitable. 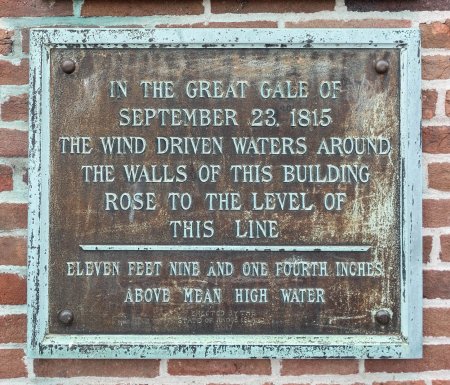 But, the scope of this article is not to bring you down or remind you of the frailty of life. It’s an historical one to highlight events lost to history or ne’er discussed. Within this context we explored the The Great Snow of 1717 and the Great White Hurricane of 1888. The perspective we earned with that article was that our 3′ of snow with 8′ snowdrifts paled in comparison to the 5′-10′ of snow and fifty, yes fifty-foot snowdrifts.

With that in mind, let’s talk about another hurricane: the Great September Gale of 1815. While the Arawakan word huracan was introduced to us in the 1500s by the Taino (first peoples of the Caribbean and Florida) the word wasn’t in common parlance until centuries later. Until the word came into common usage, early Americans referred to hurricanes as gales. Hurricane is a coordinate term of gale – or one that shares a hypernym. Wait, is this English? It sure is! It is a “simpler” way to say “A super-ordinate word or phrase; a term whose referents form a set which includes as a subset the referents of a subordinate term.” Wait…simpler may not be the word.

Let’s just say that they are very related words differentiated by subtleties. Almost interchangeable, but really shouldn’t be. Today we refer to a gale as either a windstorm without rain if it is on land, or a small storm with rain if at sea. Correct or not, that is how we hear it used colloquially.

Accounts from local Amerindians and the first settlers, oral and written, described almost two centuries without a storm of this size. There were plenty of hurricanes, and of course snowstorms and blizzards. As “they” say “We’re due for a big one.” and boy were they right. September 23, 1815 was the date when those dues were collected.

The Saffir-Simpson Hurricane Scale which categorizes hurricanes wasn’t developed until 1971. Historians place the Great Gale somewhere between a Category 3 and a Category 4 which paints a window of a storm with 111mph-156mph winds. As is typical of all hurricanes they spread their devastation across a number of states and this one was no different: Connecticut, Massachusetts, New Hampshire, Rhode Island, New York (Long Island) and Rhode Island all were punished with high winds, storm surges, and flooding.

Ships were tossed about like toys, hundreds of buildings, including churches, homes and businesses were turned into splinters, and trees were uprooted and sent sailing. When it was all said it done, everything was covered in salt deposits destroying much of the local flora and fauna. Tides rose 10-15 feet above normal, the steeple of the Old South Church in Boston was bent over, ships were reported to be sitting in the streets, and the bowsprit (a spar extending forward from a ship’s bow) of the vessel Ganges went through the third-story of the Washington Insurance Company building. 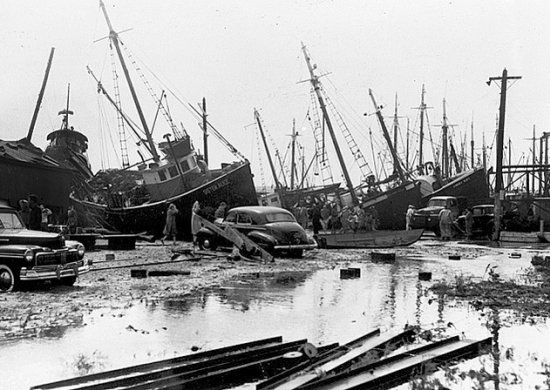 Hurricanes often displace cars onto docks, and sea vessels into the streets like depicted in this 1954 photograph. (Spinner Publications)

Locally, there are similar anecdotes, most notably our…ahem….beloved bridge was destroyed and needed to be rebuilt for the second time. The first time being when it was washed away in 1807. It would be utterly destroyed in this great gale and would only last for a few years since it was destroyed yet again in another “gale” in 1819.

The salt works owned by Caleb Russell, the rope-walks (place where rope is manufactured) of William Rotch jr., Jonathan Card’s turning mill (a shop with horizontal and vertical lathes), William Coffin jr.’s boat-building shop, Mr. Wilcox’s blacksmith shop, Cannon’s tallow chandlery, most stores on Rotch’s Wharf, and many other businesses were mostly or completely destroyed, swept or blown away. Sixteen ships that were docked in New Bedford harbor were thrown ashore.

Damage was estimated to be $12.5 million dollars or approximately $190,000,000 in today’s money. However, that damage is temporary and replaceable. The “real” damage was in the adverse effect on the local economy, destroyed livelihoods from loss of these businesses and the unfortunate loss of life.

While that is a cold number, nothing is more powerful than attaching a name or names to that number. One tragic incident was that of Temperance Perry who left Sandwich on a vessel heading to Newport, Rhode Island. En route, the vessel she was traveling on sought safety in New Bedford harbor. It isn’t clear why, but at some point, she fell overboard. A gentleman named William Macy plunged into the harbor after her and the two succumbed to the wind and waves and drowned. In a separate incident, also without detail, Marmaduke Tinkham, his son, and two of his nephews drowned in Fairhaven.

These storms are contemporary monsters in relatively recent memory, but it’s nice to look back through local history and see how storms of the past affected society and communities in identical ways. These storms have always been around, and always will be around until mankind somehow learns to control weather patterns and whether mankind should control weather patterns – will they have a domino effect and disrupt the planet’s ecosystem?

In a lot of ways, the folks of the 19th century were just like us. We have the fortune of being warned allowing us to prepare. We have modern equipment and the state to help us remove snow, clear streets of snow or debris, and insurance to help us rebuild.

I wonder if the people of 1815 had a hurricane party?

If you would like to see some archived photographs of hurricanes in our area throughout the past century, Spinner Publications is an invaluable resource.

When Joe isn't writing, he's coaching people to punch each other in the face. He enjoys ancient cultures, dead and living languages, cooking, benching 999#s, and saving the elderly, babies and puppies from burning buildings. While he enjoys long walks on the beach, he will not be your alarm clock, because he's no ding-a-ling.
Previous Police seize 41 grams of heroin, $52,708 cash in New Bedford apartment
Next Update: Three bullets shot into south end New Bedford home