Home / History / Historic Perspectives: The Great Snow of 1717 and the Great White Hurricane of 1888 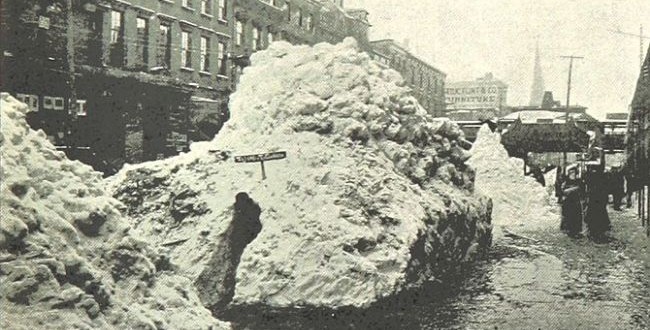 Historic Perspectives: The Great Snow of 1717 and the Great White Hurricane of 1888

With the 2014-2015 winter we got positively inundated with snowfall. Unfortunately, New Bedford doesn’t keep track of snowfall stats beyond total accumulation, not allowing us to put it all in perspective. However, Boston which got similar snowfall amounts, does keep a variety of statistics which will allow us to gain that perspective and position the rest of the article. 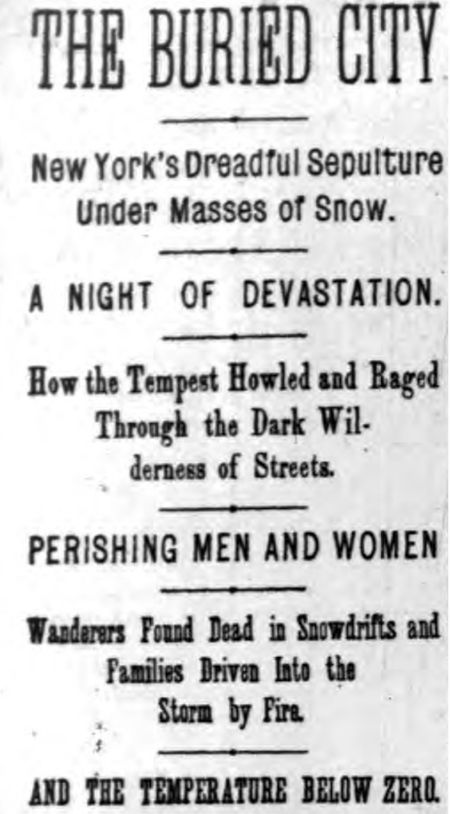 2014-2015 was a record breaking season for Massachusetts in general with Boston itself getting a record breaking 110.6 inches. It didn’t just break the record for the most snowfall in a season, but earned many others: the fastest 6′ snowfall with 72.5 inches from January 24-February 10, record amount in one month for February at 64.8 inches – more than half the amount for the season, record snowfall for a meteorological winter with 99.4 inches, record snow depth with 37 inches, the fastest 90 inch snowfall from January 24-February 15, the record for four calendar days with at last 12 inches of snow, and the most days with measurable snow in a month with 16 days in February. Phew!

These are astounding measures for anywhere on earth – excepting parts of Alaska, Siberia or Antarctica. Those of us with bad back or who didn’t own snowblowers recall the season all too well. In fact, my ancient snowblower completely died on me during the very first snow – leaving me shoveling for the rest of the season. Ouch. I have two permanent back injuries from my younger years, so that snow season was a one so brutal that it will never be forgotten by me.

As impressive as those numbers are, there were two times in our history that we received snowfall amounts in a shorter span that were more impressive, more damaging, more costly and incurred more casualties: The Great Snow of 1717 and the Great Blizzard of 1888. These two events are little known and ne’er discussed, but they are epic, massive snowstorms that lead to the loss of hundreds of lives.

The Great Snow of 1717
In 1716 three volcanic eruptions in Asia created the conditions for an historic winter in North America. The sheer volume of ash spewed into the atmosphere from the eruptions of the Taal Volcano in the Philippines, Mount Kirishima in Japan, and Kelud in Indonesia created the conditions that would lead to the the monumental snowfalls of the 1716-1717 season.

When volcanic ash and gases reach the stratosphere it absorbs outgoing land radiation and reflects incoming solar radiation – this lowers temperatures for many parts of the world, creating what is referred to as a volcanic winter. This “winter” leads to erratic and extreme weather patterns that have led to famine, spread of disease, crop failure and more. 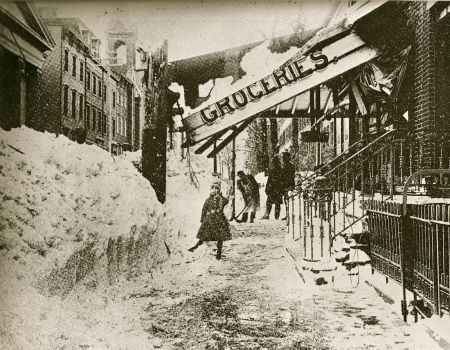 What these three volcanic eruptions helped create were the conditions for the snow received in 1716-1717: 5 feet of snow had fallen before December came to a close. Before January ended, 25 foot snowdrifts were being recorded. Not 25 inches, 25 feet.

There were three snowstorms – one of which was a Nor’easter – in a ten day period from February 27 through March 7. Amerindians told the locals that they had no oral history that mentioned a greater period of snowfall. According to New Englanders present at the time the skies were cloudy for this entire ten day period with a nearly perpetual snowfall. It was commonly reported that the only way some people could leave their homes was through their second story windows, meaning that one story homes were completely under the snow with perhaps only their chimneys poking out!

The amount of snow, the height of the drifts, and the lack of modern methods of removal meant that much of New England, New York, parts of Canada, and even Philadelphia were impassable for nearly two weeks. Mailmen who were eager to deliver the post and actually tried to forge through the snow, reported drifts as tall as 15′ high. Many locals actually dug tunnels so they could pass from home to home or to the town squares.

Since this was such an early time in the nation’s history and population was spread out, there were few records of the storm in terms of casualties or financial damage incurred. The damage to livestock was tremendous – many cattle, chickens, sheep and pigs succumbed to the frigid temperatures and many were simply buried under the snow.

There are many records of farmers uncovering their livestock up to three weeks later and finding pigs, turkeys and chickens still alive. When it comes to wild animals, there are estimates that up to 90% of the deer population died. 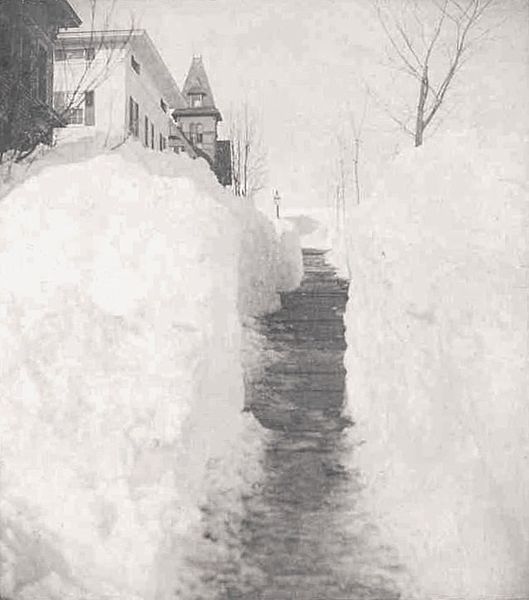 What must have been a common sight through much of New England in both great storms.

Now here’s the kicker. Get ready for this doozy: wind gusts of between 45-80 miles per hour produced snowdrifts as high as 50 feet. Let me retype the amount so you understand that it is not a typo: snowdrifts that were 50 FEET high.

People were again stranded in their homes for weeks and had to crawl out of their second and third story windows to leave their homes. Temperatures as low as -15 degrees were reported. Since this snowstorm was more than 150 years after the Great Snow of 1717, better records were kept. The storm cost an estimated $660 million dollars in today’s currency, destroyed hundreds of ships in various ports, shut down travel, closed the New York Stock Exchange, and led to the deaths of 400 people.

Damage came not only from the deathly cold and snowfall amounts, but the warm temperatures that followed days later actually created massive flooding echoing what happened in 2014-2015. If you recall there was some discussion about dumping the snow into the ocean, but many towns and cities actually did that or tried to.

The storm was so damaging to infrastructure that it led to some modern innovations like placing telegraph and telephone infrastructure underground and is partially responsible for the creation of the first underground subway system in the United States in nearby Boston. 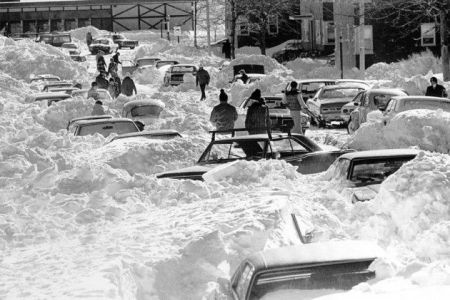 One of the recent great storms that many of us still recall: The Blizzard of ’78. (Spinner Publications)

If you are as…ahem…long in the tooth as I am, you recall the Blizzard of ’78 which was even worse than this most recent series of storms that we received last year. I was 8 years old then and this storm was responsible for some of my fondest childhood memories. I vividly recall waking up and staring out my 3rd floor window on that historic Sunday, February 5th – which is coincidentally the day my girlfriend Rachael was born; she was the Blizzard Baby – the baby born during the blizzard.
In comparison, the Blizzard of ’78 wreaked $520 million in damages, 99 deaths, and dropped 27 inches of snow locally.

Looking out the window all I saw was snow. I shouted240 to my mom “Mom! Everyone got scared and left town. No one is left.” She came into the room puzzled and asked “Why do you say that?”

“There isn’t a single car on the streets!” I replied excitedly.

She peered out of the window and said “The cars are on the street – they are just under the snow.”

Boy, that was exciting. We had to climb out of the second story hallway window, so we could shovel out the common entrance on first floor. What followed was multiple days of no school, creating tunnels out of snow drifts, sledding, snowball fights, Ovaltine, and grabbing the fin of every Camaro that drove down the street and “shoe-skiing.”
I wonder what this winter has in store for us – perhaps ammunition for a future article!

When Joe isn't writing, he's coaching people to punch each other in the face. He enjoys ancient cultures, dead and living languages, cooking, benching 999#s, and saving the elderly, babies and puppies from burning buildings. While he enjoys long walks on the beach, he will not be your alarm clock, because he's no ding-a-ling.
Previous New Bedford Chosen for Working Cities Challenge Design Grant
Next Rodman School Students Donate to Annual Holiday ‘Socks for Vets’ Drive for Veterans’ Transition House