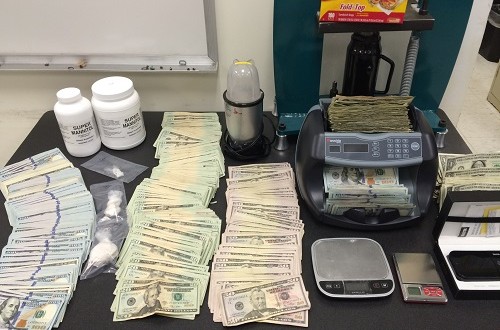 As a result of a heroin delivery service being operated out of an apartment on Tallman Street, Detective Ed Rene was able to obtain two search warrants. The warrants were for a 23 Tallman Street apartment as well as, a 2008 Chevrolet Impala with the target being Jonathan Rodriguez-Lopez.

Mr. Lopez was taken into custody at approximately 7:30 last night after he left the home in his vehicle. A passenger, Angel Helena, was found to be in possession of approximately 1 gram of heroin and is facing charges of possession with intent to distribute heroin and conspiracy.

During the search of apartment 12 by members of the Organized Crime and Intelligence Bureau, the following was seized;

41 grams of heroin, cutting agents, packaging materials, digital scales, a heroin pressing device, and $52,708 in cash. Mr. Rodriguez-Lopez is facing charges of trafficking in heroin and conspiracy. The heroin has a street value of approximately $4,000.

Both males were arrested and will be arraigned this morning in New Bedford district court.