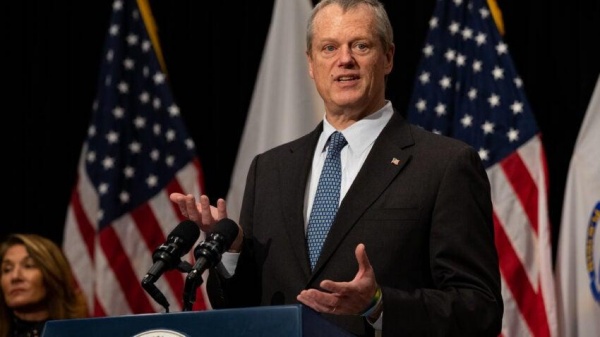 Citing improvements to COVID-19 metrics since the start of the year, Gov. Charlie Baker announced Thursday that he will lift the 9:30 p.m. curfew that he imposed in November on restaurants and other businesses, effective Monday.

The post-December holiday season spike in COVID-19 activity was not as severe as the surge that followed Thanksgiving, the governor said, and the 30 percent drop in the positivity rate, 30 percent drop in new cases and 10 percent drop in hospitalizations that have materialized since Jan. 1 suggest it is time to begin easing up on some restrictions.

“These have been long and hard days for everybody, but our hospital system was able to continue to provide medical care for residents. And today, three weeks into 2021, our public health data is trending in a better direction for some categories like hospitalizations and the percent of positive COVID cases for the first time in a long time,” Baker said. He added, “Vaccines are reaching residents, positive case rates and hospitalizations have stabilized; those trends are moving in the right direction. As a result, we believe it’s OK and it’s time to start a gradual easing of some of the restrictions we put in place in the fall.”

Though cases, hospitalizations and the positivity rate have all improved since the start of the new year, each category is still significantly worse off than when Baker first imposed the 9:30 p.m. curfew and other restrictions effective Nov. 6.

The governor will also lift the state’s stay-at-home advisory effective Monday at 5 a.m., he said.

“While today’s announcement reflects another step toward normalcy, we still have a lot of work ahead of us to suppress the pandemic once and for all and to fully reopen our economy,” Baker said.

While restaurants, health clubs, casinos, movie theaters, and other businesses will be able to stay open later than 9:30 p.m. next week, they will still not be allowed to fill their places of business to greater than 25 percent capacity. Baker announced that restriction, which initially took effect Dec. 26, will remain in place for at least another two weeks, until Feb. 8.

“As hospitals continue to stabilize after the holidays and the average positive case rate declines, we hope to see those trends continue moving forward,” Baker said. “And if they do, we’ll be back to talk about lifting some of the restrictions that are currently in place as soon as it makes sense to do so, so that people can get back to work and back to normal over the coming months.”

Baker said he understands the negative business impacts many of his COVID-19 mitigation measures have had on businesses in Massachusetts and on Thursday announced the latest round of funding through the grant program being administered by the Massachusetts Growth Capital Corporation.

“As our vaccine program continues to ramp up, we know that many businesses will have a tough couple of months in front of them. And this program is meant to help them bridge the gap and put them in a position to stay open until we get back to something like normal,” Baker said.

The governor announced that 638 more grants were being awarded to businesses Thursday, totaling about $37.5 million. So far, the grant program has awarded $232 million to 4,757 businesses across Massachusetts with more to come in the next few weeks, Baker said.