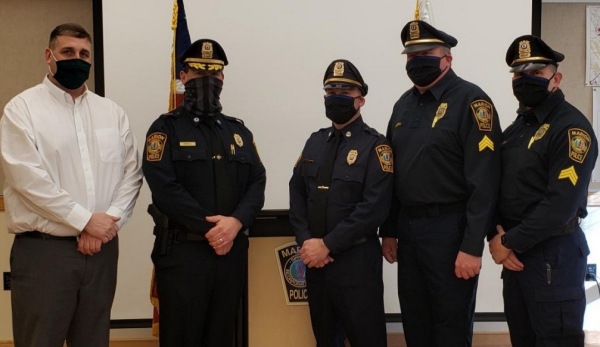 Chief Richard Nighelli is pleased to announce the promotions of three members of the department.

“I’d like to congratulate Lt. Habicht, Sgt. Savery and Sgt. Day on their promotions,” Chief Nighelli said. “Each brings several years of experience and valuable skills to their new positions and I am confident that they will continue to serve the Marion community well.”

Lt. Jeffrey Habicht
Lt. Habicht was hired as a full-time police officer with the Marion Police Department in 2011. He was promoted to the rank of sergeant in 2018.

He is the department’s computer network and software systems administrator, website and social media administrator, medical officer and infection control officer. He is currently a Massachusetts Police Training Council instructor for First Responder and CPR and is certified by the American Heart Association. He is trained in Active Threat Integrated Response, 911 telecommunications and emergency medical dispatch. He has also completed the required training to become a Massachusetts Police Accreditation Commission (MPAC) State Assessor.

In November 2016 he received national recognition as a Stop Stick “Hit of the Month” recipient for a wrong-way driver on Route 195.

Lt. Habicht is a former Massachusetts EMT-B and previously served as the director of Marion EMS. Prior to his full-time career with the Marion Police Department he served part-time as a special police officer for eight years and worked as the head athletic trainer at Tabor Academy in Marion for nearly 17 years.

He holds a bachelor’s degree in education from the State University of New York at Cortland in Cortland, New York and a master’s degree from Canisius College in Buffalo, New York where he served as a graduate assistant in athletic training.

Sgt. Larry C. Savery
Sgt. Savery began his career as a full-time officer with the Marion Police Department in 2001.

He is a senior field training officer, senior firearms range instructor and the Criminal Justice Information System (CJIS) Representative. He is a founding member of the Marion Police Honor Guard and is trained in emergency medical dispatch.

Sgt. Savery previously served as a deputy sheriff with the Bristol County Sheriff’s Office from 1998-2001, a police officer at St. Anne’s Hospital in Fall River from 1997-2001 and a reserve officer with the Marion Police Department from 1998-2001.

He holds a bachelor’s degree in criminal justice from Western New England University.

Sgt. Savery’s grandfather, Donald Savery, served as the Marion Chief of Police in the late-1950s. His father, Larry D. Savery, also retired from the department as a sergeant in 2007.

Sgt. Day is a field training officer and evidence room officer. He has completed basic mountain bike patrol training through the Massachusetts Municipal Police Training Committee’s Cops on Bicycles with Education for Bicyclists (C.O.B.W.E.B.) program. He is trained in 911 telecommunications and emergency medical dispatch and is a member of the International Association of Financial Crime Investigators.

Sgt. Day holds a bachelor’s degree in corporate finance and accounting from Bentley University and a Master of Business Administration from Curry College. He is currently pursuing a master’s degree in law enforcement intelligence and analysis from Michigan State University.