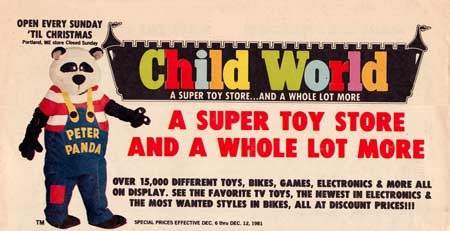 Ginger or Mary Ann? Megadeth or Metallica? Bettie or Veronica? Toys “R” Us’ or their biggest competitor Child World? Growing up these were very important questions! Wise people would answer “BOTH!”

Child World came on the scene after Toys “R” Us had a few decades under its belt. Founded in Avon in 1970, they skyrocketed to popularity and became their chief competitor in a staggeringly short period of time. At its height the chain had revenue of $800 million dollars and consisted of 182 stores. Part of their success was that they directly competed with Toy “R” Us by placing their locations very close. The local store sat where the Christmas Tree Shop is today in the Ann & Hope Plaza.

Also strengthening their ability to compete was the acquisition of Children’s Palace in 1977 and using their gimmick of placing castle towers and battlements on opposing ends of their stores. No kid could resist and would pester mom and dad to choose Child World!

Another draw for children were the mascots that they utilized in their commercials. Originally there was Happy Rabbit, but he was replaced in 1977 with overall wearing Peter Panda.

The combination of Toy “R” Us’ gaining popularity and declining sales began to hurt the chain in the late 1980s, and weakened them to the point that the recession that began in early 1990 found them financially vulnerable. Internal turmoil, restructuring and turnover further weakened them and led to their downfall. Stores began to close at a rapid rate, and by the end of 1991 – a year later – half their stores were closed. In 1992 they filed for bankruptcy.

They continued to flounder and head towards going out of business, when another toy store chain Lionel Kiddie City entered the picture. Child World suggested a merger, and Lionel Kiddie City agree if they could finalize all paperwork by the deadline in July of 1992.

They rushed to liquidate their inventory to improve cash flow and capital by having a chain wide clearance sale. However, it didn’t raise monies fast enough. Child World announced a change of plans: the clearance sale would now be a “Going-Out-Business” sale. By September all stores had been liquidated and closed their doors permanently.

Do you have any memories of Child World? Perhaps other stores in the area? Please share!

Photo Guide
1. Ad showing items and prices from decades ago. Visit by Snoopy too!
2. “Everything a store should be!”
3. “Capitol Theatre” today
4. The castle like appearance that drew kids.
5. Vintage photo of a child world.
6. Creative toy display from the 1960s.
7. Holly Hobby!
8. Peter Panda on skates!

When Joe isn't writing, he's coaching people to punch each other in the face. He enjoys ancient cultures, dead and living languages, cooking, benching 999#s, and saving the elderly, babies and puppies from burning buildings. While he enjoys long walks on the beach, he will not be your alarm clock, because he's no ding-a-ling.
Previous Polar Bear Plunge Fundraiser on New Year’s Day
Next The South Coast Hot Jobs List – 12 December 2013