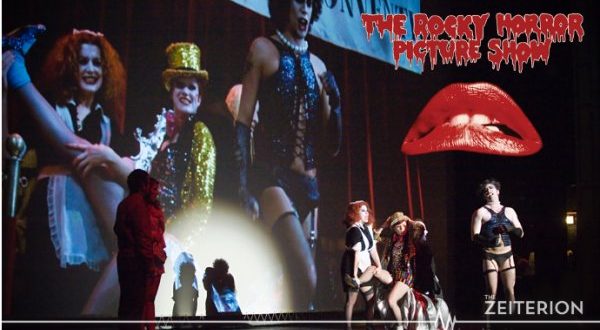 Zeiterion pays homage to Halloween with slate of spooky shows

Celebrate the season at the Zeiterion Performing Arts Center as it presents Halloween-themed programming that’s fun for the whole family. The line-up includes a frightfully funny musical comedy, two family-friendly movies, a silent film with a live soundtrack, and a fan-favorite movie with a twist. Tickets can be purchased by calling 508-994-2900, online at www.zeiterion.org, or at the Zeiterion Box Office at 684 Purchase Street in New Bedford.

The fun begins on Friday, October 27, with Tony Award® winning A Gentleman’s Guide to Love & Murder, and it continues on Sunday, October 29, with the Halloween Movie Spook-A-Thon featuring The Addams Family and Coraline, followed by the classic silent film The Hunchback of Notre Dame with live organ soundtrack. The festivities culminate on Halloween night as RKO Army provides a live shadowcast of The Rocky Horror Picture Show as the movie rolls on screen.

The Halloween-themed programming line-up is as follows:

A Gentleman’s Guide to Love & Murder
Friday, October 27, 8 p.m.
Tickets: $45/ $52/ $59/ $65
Broadway audiences have embraced the uproariously funny A Gentleman’s Guide to Love & Murder, which received four Tony Awards, including Best Musical. Now the national tour of the dark musical comedy arrives in New Bedford to share the story of Monty Navarro, a distant heir to a family fortune who sets out to jump the line of succession by eliminating the eight pesky relatives who stand in his way. Of course, it will all be worth it if he can slay his way to his inheritance… and be done in time for tea. The Hollywood Reporter raves, “Gentleman’s Guide restores our faith in the musical comedy.” Get ready for a dark comedy that will have you dying with laughter!

Halloween Movie Spook-A-Thon
Sunday, October 29, 11 a.m.
Tickets: $10, General Admission
It’s double the trouble when The Z presents a pair of spooky movies back-to-back to honor the frightful holiday. First, The Addams Family (1991) follows Gomez (Raul Julia), Morticia (Anjelica Huston) and their ghoulish household as they fall prey to a scam involving long-lost Uncle Fester (Christopher Lloyd). Next is Coraline (2009), a visually stunning stop-motion animated feature from the director of The Nightmare Before Christmas. Coraline Jones (voiced by Dakota Fanning) is bored in her new home until she finds a secret door that leads her into a world that’s just like her own…but better!

The Hunchback of Notre Dame – Silent movie featuring The Mighty Wurlitzer Organ
Sunday, October 29, 4 p.m.
Tickets: $7.50, General Admission
Victor Hugo’s novel comes alive in the 1923 silent movie, with a live soundtrack from organist Bernie Anderson and The Z’s Mighty Wurlitzer Organ. Set in 15th-century Paris, The Hunchback of Notre Dame follows the evil Jehan (Brandon Hurst) who lusts after Esmeralda (Patsy Ruth Miller) and commands the hunchback Quasimodo (Lon Chaney) to capture her. But Esmeralda is sympathetic to Quasimodo’s condition, and an unlikely bond forms between them. Join us for this unique showing of the classic film. Generously sponsored by the Eastern Massachusetts Chapter of the American Theater Organ Society.

The Rocky Horror Picture Show – Live Shadowcast from RKO Army!
Tuesday, October 31, 8 p.m.
Tickets: $15, General Admission
The cult classic with a twist returns! RKO Army performs the must-see flick of the season, while the movie starring Tim Curry, Susan Sarandon and Barry Bostwick rolls on screen. Whether you’ve seen The Rocky Horror Picture Show 10 times or never before, you’re in for a real treat this Halloween! This R-Rated performance encourages participation from viewers 18 years and older.