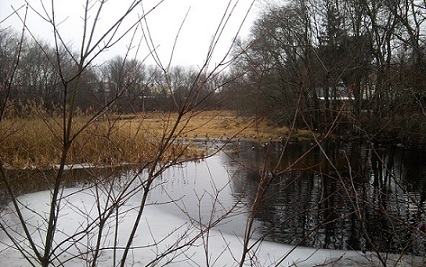 Paskamansett landing is a site that we’ve all driven past a number of times and never realized. As a matter of fact, many of us drive by it every day, some a few times a day. It is a site rich with history and the earliest settled by Europeans in the region. Paskamansett Landing is on 287 State Road across the street from the old Mr. Tux and just before Rose & Vicki’s. There is a small picnic area, canoe launch and memorial that overlooks the Paskamansett “waterfall.” It’s a gorgeous place to listen to the hypnotic, steady stream of water running by and capture some amazing wildlife smack dab in the middle of the busiest part of the town of Dartmouth. Because of this many do not even know it exists!

Immediately after the 115,000 acres of land was purchased by Governor Bradford and the 36 original proprietors from Wasamequin and his son Wamsutta in 1652, Ralph Russell saw an opportunity and left Taunton/Raynham to settle in Dartmouth, or Olde Dartmouth. Russell was originally from Pontipool, Monmouthshire, Wales, and along with brothers (not his) James and Henry Leonard built the first iron-works in North America at Taunton. Waterways are the foundations of civilization since life can’t be sustained without it. Many occupations can’t exist or properly function without water. It’s the first thing pioneers and settlers look for and what Mr. Russell did when he came to Dartmouth. He needed water to run his ironwork, specifically to cool the metal products that he forged.

At that time, early in the 17th century he came directly to what was then called the Paskamansett River from the Algonquin language meaning “Fork at the path.” Depending on which part of the river you are on, it is also called Slocum’s River (salt-water portion) named after Anthony Slocum who was contemporaneous with Ralph Russell. Here Russell built the second iron-works in all of North America. This Russell is of course the antecedent of the prominent Russell family that shows up in the region’s history in general and specifically of the Joseph Russell that gave New Bedford its name.

Further down the river from that site is Paskamansett Landing. The river or rivers that pass by the landing originate at Sassaquin or Myle’s Pond before meandering through New Bedford into Dartmouth, by the town’s former dump, under Route 195 and towards Smiths Mills and the landing. Of course, it continues on towards Russells Mills. This river was so healthy at one time that it supported rather large river herring runs. In spite of the march of modern progress, pollution and development, there is still a surprisingly sizable variety of wildlife including Red-winged Blackbirds, Osprey, Warblers, Snapping Turtles, Snowy White Egrets, Great Blue Heron, Bass, Bluefish and even Deer! There is enough wildlife to form a Paskamansett Bird Club.

On the landing site is also the original grist mill grinding stone that George Babcock used back in 1686. You can even still see some of the foundation stones and granite pilings from his original mill. In 1706, Elishib or Elisha Smith purchased the rights to the mill and waterway and dubbed the spot “Smith Mills Village.” By 1792 Benjamin Cummings built his homestead nearby, and opened a grocery store and meat market and owned the property until he passed in 1863, in the middle of the Civil War. In 1938 the Szymanski Family bought the property and a few generations lived on the property, ran an auto parts store, and a Chevrolet Dealership and Garage. The Szymanskis along with the Commonwealth of Massachusetts Self-Help Program other contributors, financially funded the project to turn part of the property into a scenic park, historic site and canoe launch which was completed in 1999.

The site is the great spot to launch a canoe or kayak even for beginners. It also features a few monuments and dedicatory plaques, benches to rest your weary legs or soul, and even a bird house! If you are on your way to work and have a few minutes to rest or have a 15 minute break or lunch consider stopping by the landing and transport yourself to a nature reserve that is “miles” and years away! It will recharge your soul, re-energize and revitalize you. During warmer weather it’s a great spot to curl up to a good book, take some great shots of the wildlife, or simply sit and imagine what the site was like from the 1650s onward.

Special thanks to the New Bedford Whaling Museum for the use of the old photos.

When Joe isn't writing, he's coaching people to punch each other in the face. He enjoys ancient cultures, dead and living languages, cooking, benching 999#s, and saving the elderly, babies and puppies from burning buildings. While he enjoys long walks on the beach, he will not be your alarm clock, because he's no ding-a-ling.
Previous That Old Silverbrook Farm in Acushnet
Next Fairhaven’s Top Ten (Almost) Forgotten Landmarks