Home / History / Recycling Is Nothing New; Short History of Recycling 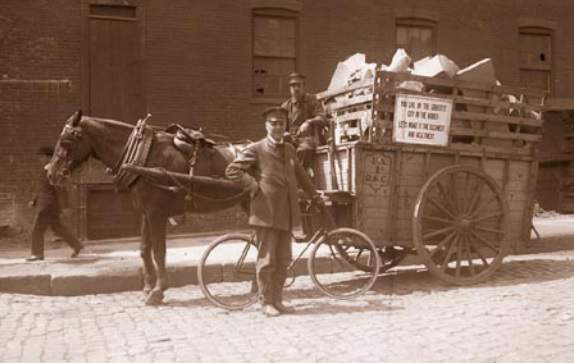 Recycling Is Nothing New; Short History of Recycling

The History of Recycling
I always considered recycling to be a fairly recent phenomenon. Maybe that’s because we tend to associate recycling with environmental degradation, which we all know has become a problem of mammoth proportions in the recent times.

So, imagine my surprise when while digging up information for this post I found out that recycling as a concept has existed for as long as the human race. Huh?

Yes, recycling in its current form of trash separation and curbside collection was not present all those years ago, but there are studies to suggest that recycling was a common practice as far back as 400 B.C. necessitated by scarcity of resources.

In pre-industrial times, recycling of bronze and other scrap metal was fairly common driven by the affordability of recycled feed-stock as opposed to virgin ore. Industrialization spurred this demand for affordable materials even further.

The 19th and early 20th century witnessed railroads, automobile, and steel industries making use of metal scrap for manufacturing. Peddlers roamed streets, went from door to door, and scavenged dump sites in search of sources of metal. By the time the First World War started, American cities were swarming with thousands of such peddlers.

During the two world wars, shortage of resources put pressure on administrations to promote recycling and resource conservation programs. Recycling received another shot in the arm during wartime and some of the programs initiated at this time were continued even after the war.

Circa 1970’s – years of unchecked industrial growth had raised considerable environmental issues. This accompanied by rising energy costs ensured that recycling as a movement gained momentum. The year 1970 also marked the observance of the first Earth Day, birth of the U.S. Environment Protection Agency (EPA), and formulation of the famous three-arrow recycling symbol that we’re all so familiar with.

Among the first bill to be introduced in the U.S. to encourage recycling was the “Bottle Bill” of Oregon in 1971. The bill provided for a nickel in refundable deposit on beer and soda cans as an incentive for people to recycle.

Recycling was on its way to becoming big! Very big!

The present & the future
According to the EPA, we Americans produce more than 200 million tons of garbage each year. We also have the dubious distinction of producing more trash per person per day than anywhere in the world. In 2010, this figure stood at 4.43 pounds of municipal solid waste (MSW) per person per day. Of this, we managed to recycle and compost about 1.51 pounds equivalent to a recycling rate of 34.1 percent per this EPA fact sheet.

Compare this to recycling rate of three decades ago (the recycling rate in 1980 was 9.6 percent) and we can take pride in the progress we’ve made so far as recycling is concerned.

While that’s a significant drop, clearly a lot of work still needs to be done in the area if we want to prevent the harmful impact landfills have on our environment. If the sight of our overflowing garbage bins is any indication, we’re still some distance away.

A few things you can do to make sure that the future of recycling is safe in our hands include composting your organic waste, making your trash cans leaner by reusing and recycling more, disposing electronic waste and metal scrap in a proper manner.

One of the more profitable ways of managing e-waste and metal scrap is to sell them to a private recycler like SIMS Metal Management. Not only will it ensure that the waste is disposed of properly, but you’ll also be able to make a quick buck from it.

We need to do this because on the future of recycling depends our future on this planet!

Previous Who remembers…..Arlan’s Department Store?
Next 7 Things to Know About The Future of Minimum Wage in Massachusetts