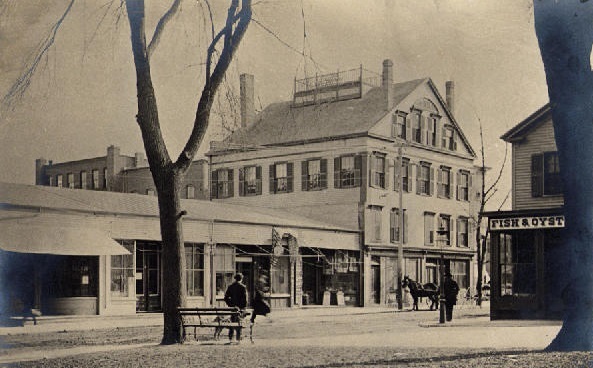 Cheapside in 1893 – Courtesy of the N.B. Whaling Museum

Once upon a time, in the early 19th century, there was a section of New Bedford that was the premiere shopping destination in the region. Far before the Dartmouth Mall was an area called Market Square. The square was a grouping of businesses and the progenitor of the modern shopping plaza.

Within this Market Square was a strip of businesses that were renown for their relatively low prices on a variety of goods and services: Cheapside. Cheapside was the eastern side of the Market Square, and was a portion of Pleasant Street where the Police Station, Our Lady’s Chapel, and the New Bedford Community Development Center sit today. Of course, the success of the district meant spillage into Union Street, Mechanics Lane, William Street and others.

The “cheap” in the name Cheapside was derived from a medieval English word for “market” and Cheapside was a carry-over from the English that first settled in the area. There had been a Cheapside market in London -and even a Canadian equivalent in Nova Scotia – since as far back as the 12th century. That is not a misprint.

This district was famous, or infamous, for attracting Elizabethean poets, playwrights, and musicians. It was a popular destination and by the 16th century was the hub for business, commerce and trade. So it was only natural to dub this shopping destination as Cheapside. At the time Cheapside existed the population of New Bedford was 11,113 people. Surely local business men were hoping to replicate even some of the success of the English version. As evident by many of the town and city names in New England, the English wanted to be reminded of places back home. Places like York, Jersey, Taunton, Swansea, Hampshire, Coventry and so on all have their “original” cities in England. A sort of homage, if you will.

The American version even had its own currency in the 1830s. There were a number of coins that had a one-story building on it that were issued by Francis L. Brigham who originally operated a General Goods and Wholesale Store and eventually became a dentist that had an office on 24 Purchase Street.

Some of the other proprietors listed in 1836 were Gilson Homan who ran a dry goods store, Cyrus Hooper & Co. (Asa Coombs) who sold hats, Nathaniel T. Bent, who was a reverend, Thomas Ellis, furniture sales and repair, Mary T. Kempton, a Milliner (made women’s hats), George J Pope, a Bookseller, Benjamin T. Ricketson, (Tobey & Ricketson), Fanny Robinson, another Milliner, George Sisson, who sold crockery and glass ware and the famous William A. Wall, the artist. There were also carpenters, boarding houses, a lady’s seminary, cabinet makers, dress makers, and even a “dancing master” that went by the name of William L. White. Quite the variety!

The old Market Square was removed in 1916 in the most part to erect the new Police Station that sits there today. Slowly the Market Square began to fade, and surely the Great Depression in the 1920s served as a death knell for it.

I’ve assembled all of the available images of New Bedford’s Cheapside and even a few of the English version. These are courtesy of the New Bedford Whaling Museum and Spinner Publications, who have always been generous in allowing us to use their photos from their massive databases. Enjoy!

When Joe isn't writing, he's coaching people to punch each other in the face. He enjoys ancient cultures, dead and living languages, cooking, benching 999#s, and saving the elderly, babies and puppies from burning buildings. While he enjoys long walks on the beach, he will not be your alarm clock, because he's no ding-a-ling.
Previous Fairhaven’s Top Ten (Almost) Forgotten Landmarks
Next Working Waterfront Festival 2013