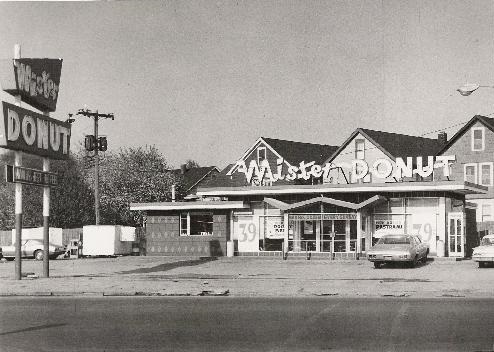 Mister Donut was started in 1955 by Harry Winouker

Mister Donut is one of those “Who Remembers…?” that is on the fringe of my memories. It’s at the outer limits and extreme range for this 43 year old. I have vague memories of Mister Donut. I don’t recall the addresses, the exterior or the interior. I do remember the important part though: I would order a small “regular” of deliciousness. I distinctly remember that cheesy logo and either white or brown cup – a horrible color that Mister Donut adopted before a certain mail delivery company did. I wouldn’t have it any other color!

When digging up information on Mister Donut, I began with the misconception that it was an utterly defunct business. One of those places that we have fond memories of and that’s it. Nothing physical exists. However, I came to find out that Mister Donut is a modern and incredibly popular coffee chain – just not in our neck of the woods. In fact, Mister Donut has over 10,000 shops and can be found all over the world and is Japan’s most popular coffee chain and pronounced Misutā Dōnatsu. Japan is also where corporate headquarters are. Their Facebook page has 102,000 fans. Go figure.

If you are in Europe, Canada, Asia, even Africa and want a Mister Donut, you can get it. They are a modern chain with a far more expansive menu than they had “back in the day.” New items, more varieties, more more. Blasphemously offering salad, rice, and other healthy fare.

But I’m not having any of that. I’m not going there. These memories are hallowed ground. Watch where you tread modern progress! Leave Britt…er…Mister Donut alone!

If you are craving a Mister Donut experience (albeit a modernized version) I believe that the closest Mister Donut is at 64 Rhode Island Ave in Fall River.

Do you recall the locations of the Mister Donuts in the greater New Bedford area? Please share!

When Joe isn't writing, he's coaching people to punch each other in the face. He enjoys ancient cultures, dead and living languages, cooking, benching 999#s, and saving the elderly, babies and puppies from burning buildings. While he enjoys long walks on the beach, he will not be your alarm clock, because he's no ding-a-ling.
Previous New Bedford Preservation Society presents Charles W. Morgan Cemetery Tour
Next Trader Jan’s Archery Pro-Shop: Shoots a bullseye with local archery enthusiasts