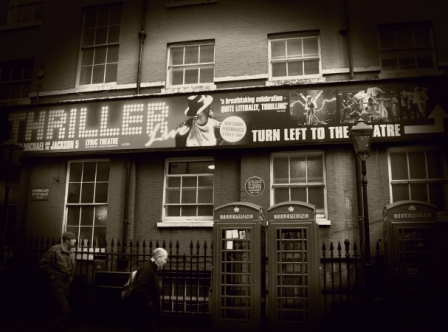 When we are young, we dream about what we want to be when we grow up.  For many of us, those plans change.  Still, there are the lucky few that are born with a talent, are destined to find themselves in that special job, and in the end, actually make it.  Twenty-one year old New Bedford native, Marlena Johnson, is one of those lucky few.  For her, luck does not even begin to describe the life-changing experience she is about to embark on.  A natural singer and entertainer, Johnson will be spending the next six months in London starring in THRILLER Live, the international Michael Jackson tribute concert. (http://thrillerlive.com/)

“I always told myself I’d meet him, but if not, this is the closest,” says Johnson, a lifelong Michael Jackson fan.  “The first song I heard was Pretty Young Thing and from that moment on, I just knew I loved him.”  Today, Johnson has been collecting Michael Jackson memorabilia for 13 years.  “I’m not obsessed. It’s just that Michael Jackson has been with me my entire life.  He’s been a big part of my upbringing.”  Now, Johnson gets to live out her greatest dream, singing in his honor and keeping his legacy alive. 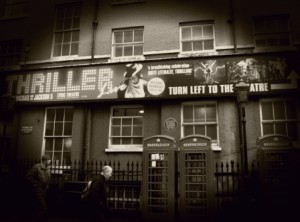 Johnson was selected after being flown out to London for an audition.  Her referral came from her sister, Samantha, who currently stars as the Leading Lady in the THRILLER Live Tokyo tour.  Johnson says she was nervous about auditioning, but credits much of her success to her experiences in New Bedford.  A former Miss New Bedford, Johnson says that pageants helped prepare her to be “articulate, confident, and motivated.”  When it came time to perform, she also had local experience as the winner of the first New Bedford Idol competition and as a ‘Dynamite’ in the 2012 New Bedford Festival Theatre production of Hairspray.

For Johnson, traveling to London is not just an opportunity to perform – it’s an opportunity to inspire.  It’s about “spreading a positive message. Michael Jackson just wanted to spread love.  If people really listened to his music and to his message, they were anthems.  He wanted to heal the world.” Even greater than her love for music, Johnson is passionate about inspiring people and making a difference.  “I feel like for me, God blessed me as someone who can deliver a message. Part of my inspiration always comes from Michael Jackson and what I got from his messages.”  Now, by performing and inspiring, Johnson feels that this experience will help her figure out who she is and what her future holds.

Though leaving for a short while, no stardom can keep Johnson from her true New Bedford roots.  “My life is here in New Bedford.  This is where I grew up, this is what I’m used to and this is what I know.  The people I love are here.”  Ultimately, Johnson hopes that impacting others through music will lead her back home to New Bedford to do the same. “If you have a talent, you utilize that talent.”  While she doesn’t have all the answers, Johnson knows one thing.  “I know I want to work with kids. I want to make a positive impact on their life. I don’t know the label, what I would call myself, or what I want to be, but I know what I want to do and that’s inspire.”

For the next six months, Johnson will be on tour in London, rehearsing and ultimately performing three times a week as an understudy to the Leading Lady role. At the present time, the Leading Lady is former American Idol Season Two finalist, Trenyce Cobbins.  The show consists of Michael Jackson’s greatest hits and classics from the Jackson 5. Johnson will sing and dance, or as she calls it “the Michael ‘swag’.”  Just days before leaving, Johnson was both nervous and excited.  “It still hasn’t hit me.” Aside from her excitement, she states that she will miss her family and her close friends.  “There’s no way I can forget New Bedford.”

Humbled by her life at home, Johnson is ready for the exciting journey that lies ahead. With Michael Jackson’s music and a message of love, Johnson aims to inspire. “I think everyone can change their life just by changing their thoughts.”  Whether in New Bedford or halfway across the world, she says, “We all need to work together to make this place beautiful.”

To follow Marlena Johnson’s journey, visit her blog at http://marlenajohnson.tumblr.com/.