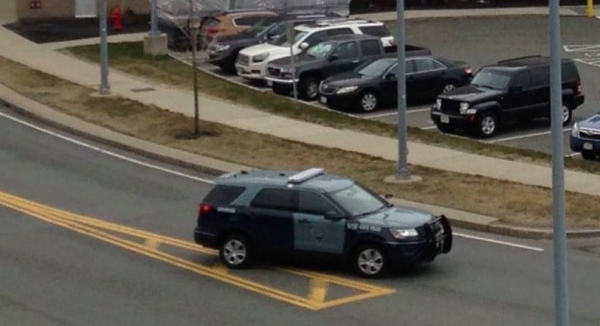 A short time after 2:30 p.m. on Thurday, April 15, Trooper Brian Donaghey, assigned to the Massachusetts State Police Troop F, was working a security checkpoint inside of Terminal A of Logan Airport.

Trooper Donaghey received a radio transmission that employees of a restaurant near gate A5 were conducting CPR on a male party who was unresponsive. Thinking fast, Trooper Donaghey retrieved an Automated External Defibrillator (AED) from within the terminal and ran to the scene of the medical emergency. As employees continued chest compressions, Trooper Donaghey prepared the AED for use.

It was then, that Trooper Donaghey was joined by fellow Troopers Ilya Toumilovich and Ryan Navin. The three Troopers immediately took over CPR from restaurant staff, taking turns providing chest compressions, maintaining the victim’s airway, and operating the AED. The Troopers had to deliver two shocks from the AED before Massport Fire Rescue Personnel were able to arrive on scene from outside the terminal.

Once on scene, Lieutenant Brian Daly, and Firefighters Brandon Miranda and Charles DeLarda provided Troopers with additional life-saving equipment in the cramped quarters where the patient had collapsed. Lieutenant Daly, and Firefighters Miranda and Delarda were soon able to squeeze into the confined space to operate the AED and assist the fatiguing Troopers with chest compressions, providing an additional required shock from the AED.

While continuing CPR, a very difficult extrication was executed by Troopers and Fire-Rescue personnel. Just as Boston EMS personnel were rushing onto the scene, MassPort Operations employees Steve Keough, Brianna Karrmann, and Jeff Katz sprang into action and volunteered to assist first responders removing the patient. The people on scene were able to lift the patient over a counter and onto the awaiting stretcher, allowing Boston EMS to immediately initiate Advanced Life Support, and transport the patient to the hospital.