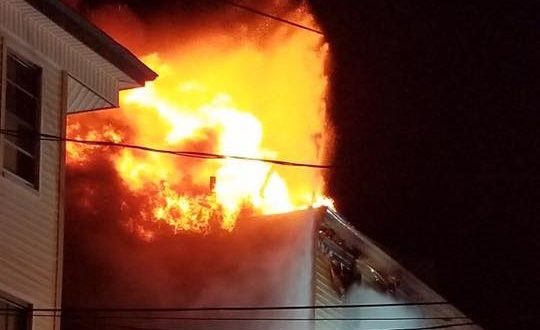 A New Bedford man charged with two arsons in the North End earlier this month has now been arrested for seven more fires in the area, closing the book on a frightening time for residents in the affected area.

Jose Debrito, 30, of 492 Sawyer St. Apt. 2, New Bedford, has been arrested for setting nine structure fires in the north end of the city in less than three months.

“I feel safer now that he’s not around,” said Ana Cordeiro, who lives in one of the buildings Debrito set on fire. “I am very grateful that the police caught him.”

A combined effort of the New Bedford Police detective division, including Det. Steve Wadman, the New Bedford Fire Department, the District Attorney’s office and the state fire marshal’s office led to the arrest of Debrito on nine charges of arson of a dwelling.

He is currently being held at the House of Correction after being deemed a danger following a dangerousness hearing Oct. 19. Thirty exhibits of evidence, including video evidence, were presented.

A probable cause hearing is scheduled Nov. 19.

In all of the cases, DeBrito poured gasoline on the windows or doors of the buildings, then lit them on fire. The home at 140 Hathaway St. was the residence of a former girlfriend. DeBrito was formerly employed at Purity Linen. The remaining locations, all within close proximity of his 492 Sawyer St. residence, appear to have been selected at random.

In many of the cases, DeBrito remained in the vicinity to watch the building burn.

“I am extremely pleased and grateful for the New Bedford Police Detectives and in particular Det. Steve Wadman that worked on the case along with the New Bedford Fire Department and the Fire Marshal’s office in identifying and bringing a serial arsonist to justice,” New Bedford Police Chief Joseph Cordeiro said. “I am equally grateful to the community and those that supplied information and assisted us. I encourage our community to continue to forward information to us, together as a ‘City of One’ we can make the difference that we all want to see.”

“I commend the work of New Bedford police detectives, our Fire Department and the state fire marshal’s office for their skillful investigative work that led to the apprehension of an individual responsible for putting families in grave danger,” said Mayor Jon Mitchell.

“I would like to thank the joint investigative team of the New Bedford Fire Department, New Bedford Police Department and Massachusetts Fire Marshal’s office that spent countless hours bringing this case to a close,” Fire Chief Michael Gomes said. “These building were occupied structures and this could have ended in tragedy.”