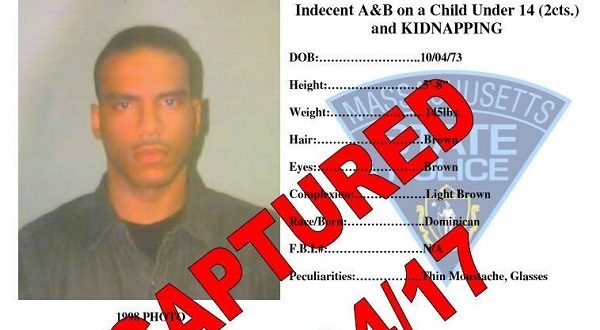 Fugitive Brought Back to Massachusetts to Answer to 1998 Child Rape, Kidnapping Charges

A former bus driver for children with special needs who is charged with kidnapping and raping one of his young passengers in Saugus in 1998, but fled before his trial, was returned to Massachusetts Thursday night to face justice.

A relentless investigation by Saugus Police, Massachusetts State Police, the United States Marshals Services, and the Essex County District Attorney ensures that HENRY GONZALEZ, now 44, will answer to charges of rape of a child with force, kidnapping, and indecent assault and battery on a child under 14. 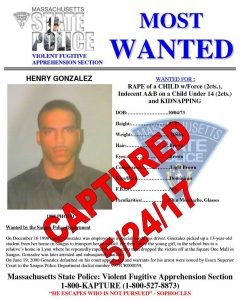 GONZALEZ, who lived in Lynn at the time of the crime in 1998, had been added to the Massachusetts State Police Most Wanted list in 2001. He was also featured on the former America’s Most Wanted television show.

“No one on the investigative team ever forgot the victim who was so seriously harmed by this violent criminal, and no member of the team ever wavered in their dedication to hauling him out of the shadows where he was hiding and into the light of justice,” said Colonel Richard D. McKeon, superintendent of the Massachusetts State Police.

Saugus Police Chief Domenic DiMella added: “This man committed a heinous act, betraying the trust placed in him by the victim, her family and the community as a whole. For nearly 20 years, he’s evaded the law, and it is through the hard work and tireless efforts of Saugus Police Detectives, the Massachusetts State Police, the United States Marshals Services and the Essex County District Attorney’s Office that this man is now being held accountable for his actions today.”

After being located in the Dominican Republic through a joint local-state-federal investigation, GONZALEZ was arrested there earlier this year by deputy United States marshals.

“Today, I want to commend the Essex County District Attorney’s Office, the investigators with the Massachusetts State Police, the Saugus Police Department, and the deputies of the United States Marshals Service for their steadfast commitment to ensuring Henry Gonzalez be held accountable for the crimes for which he has been sought since 2000,” said John Gibbons, United States Marshal for the District of Massachusetts. “I hope this arrest brings some measure of closure to the victim and affected family members who have waited 17 years for justice in this case.”

GONZALEZ was flown into Logan Airport Thursday night under guard of United States deputy marshals and turned over to Troopers assigned to the State Police Violent Fugitive Apprehension Section. The troopers transported him to the Saugus Police Department, where he is being held pending his return to Essex Superior Court to resume criminal proceedings against him.

“This was an extraordinary collaboration of local, state, and federal law enforcement partners all for the single cause of justice for the victim and her family,” said Essex District Attorney Jonathan Blodgett.

On December 16, 1998, the Saugus Police Department received a report that a 13-year-old special needs student had been kidnapped and sexually assaulted by her bus driver, earlier that day. An ensuing investigation by Saugus Police detectives resulted in GONZALEZ’s arrest. The Essex District Attorney’s Office indicted GONZALEZ on two counts of rape of a child by force, two counts of indecent assault and battery on a child under 14, and kidnapping.

A trial was scheduled for June 2000 in Essex Superior Court but GONZALEZ did not appear for court and a warrant was subsequently issued for his arrest.

Saugus detectives and the troopers from the Massachusetts State Police Violent Fugitive Apprehension Section began an intensive investigation to locate GONZALEZ. The investigation continued for years. The detectives and troopers eventually developed information that GONZALEZ was in the Dominican Republic. State and local investigators contacted the United States Marshals Service for assistance, and that agency began working with its resources in the Dominican. As a result, GONZALEZ was arrested there by deputy marshals in late May. His extradition was completed Thursday night.