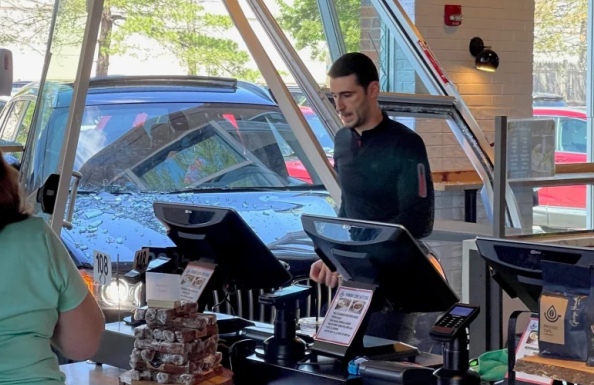 At 3:15pm, on Monday afternoon, Newton Police and Fire Departments responded to reports of an SUV slamming into the popular ‘Pressed Cafe” on Needham Street, in Newton.

Upon arrival, responders found a black BMW SUV embedded halfway into the building stopping right in front of the area where the cashiers work, and people pick up their orders.

A woman in her 50s was the driver of the vehicle and had her teenage daughter in the front passenger seat, and two of her daughter’s friends in the back seats. Newton Police Lt. Bruce Apotheker said that both suffered non-life threatening injuries and were taking to a local hospital while the two teenagers in the back left with family members.

During the incident, a Pressed Cafe manager estimated that there were approximately 50 people inside. “There’s a person that we’ve seen in a video from inside that just missed getting struck. That’s usually a very busy area.” said Lt. Apotheker. ”
“God was watching over a lot of people today.”

Eyewitnesses on scene stated that it appeared that as the driver was pulling into the parking spot, she stepped on the gas instead of the brakes.

The crash is currently under investigation.