Home / Best of the South Coast / The Seamen’s Bethel 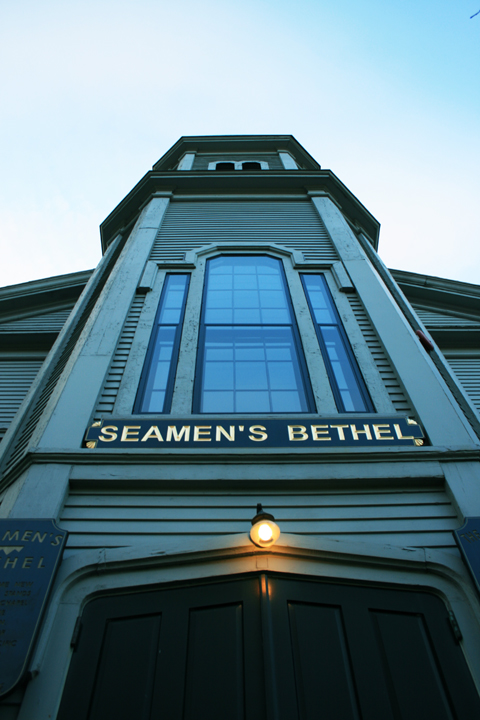 Are you a student, New Bedford resident, or perhaps a person seeking adventure and inspiration?  If so, there is an obscure historical gem available for public viewing, recognized primarily by sailors and Moby Dick enthusiasts.  It never speaks out loud, but silently beckons those with a heart and passion rooted in the sea.  During the living night, inclement weather or still darkness, it sings a song of serenade, honor, and triumph to those who never returned home.

In the early morning’s tranquil bliss, it bathes in the glimmering glow of the golden sunshine, remembering and bereaving the ones who never returned, for each is forever fortified in the very soul of this stunning architectural masterpiece.  Their chronicles may hold residence here for a final rest, but their everlasting presence can be experienced in every flickering lighthouse beacon, felt in every breaker crashing upon the shore, and most significantly, heard in the omnipresent roar of the ocean’s lore.

Here atop Johnny Cake Hill stands a silent legend, world-renowned in every ocean port on the map:  The Seamen’s Bethel.  Everyone living in the New Bedford area should take advantage of the opportunity to explore one of New England’s finest historical relics.  Don’t underestimate the feeling of antiquity in your soles as you walk the majestic cobblestone street leading the way to the Bethel.

Erected May 2, 1832, by the New Bedford Port Society, the Seamen’s Bethel is a landmark honoring the New Bedford whalers and fisherman who perished at sea.  Thirty-one cenotaphs hang in remembrance of these individuals, encased in black frames (possessing semblance to traditional gravestones), and adorned with hand-carved text.  Cenotaph means ’empty grave.’  It is a tomb, plaque, or monument dedicated to a person whose body or remains are buried in an alternate location.  Twenty-three of these cenotaphs are dated prior to 1900, and each provides a brief summary of the hardship associated with the person’s death.  In some cases entire crews were lost at sea, and a few more current cenotaphs remember these affiliates.

In 1851, the Seamen’s Bethel was given everlasting fame when it was referenced in Herman Melville’s Moby Dick.  Melville describes a scene set in the Bethel, depicting a sermon given from an imagined pulpit that didn’t exist during Melville’s time.  However, after the 1956 Moby Dick film was released, a pulpit mirroring the film version (as the prow of a ship) was added to the Bethel in 1961 to promote tourism. Melville himself visited the chapel in 1840. The pew where he sat is now inscribed with a dedication to him.

An excerpt from Moby Dick states, “In this same New Bedford there stands a Whaleman’s Chapel, and few are the moody fishermen, shortly bound for the Indian Ocean or Pacific, who fail to make a Sunday visit to the spot.”  It was tradition for a whaler to visit the chapel before any departure to the sea, and this is what Melville was referring to.

Here is some information for those who are interested in the Seamen’s Bethel, or planning a visit:

Previous Typography in the Seamen’s Bethel
Next Will the New Bedford Gun Exchange Program Work?