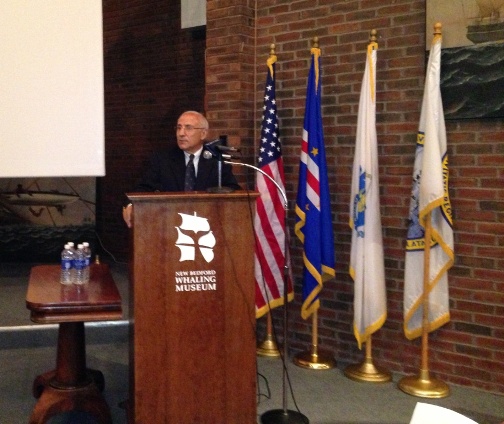 An unprecedented multi-year gift of $1.8 million will be recommended from the Jacobs Family Donor Advised Fund of the Community Foundation of Southeastern Massachusetts (CFSEMA) to the New Bedford Whaling Museum (NBWM) in support of a new Educational Center and Research Library, quadrupling classroom space, the NBWM Trustees report. Joan and Irwin Jacobs are long-time strategic partners in philanthropy in New Bedford. Irwin is a New Bedford native and the founding chairman and CEO emeritus of Qualcomm. They reside in La Jolla, California and return to New Bedford annually to award scholarships to New Bedford college-bound students.

“We believe the Museum’s Educational Center and Research Library is a very worthy cause. Our intention is to help the Museum bring this project to fruition as soon as possible,” said Dr. and Mrs. Jacobs in an e-mail to the Co-Chairs of the capital campaign, George B. Mock III, President of Nye Lubricants and Donald S. Rice. Mock is 1st Vice Chairman and Rice is Assistant Treasurer of the NBWM.

“Trustees are euphoric because of the magnitude, generosity and timeliness of this gift,” said Hon. Armand Fernandes, Jr. Chairman of the Board of Trustees. “It is the largest single gift in the history of the organization. Because of their extraordinary support, we have reached 80% of the construction goal, enabling a “green light” for construction and ground breaking in 2014.” Fernandes continues, “Our debt of gratitude to the Jacobs’ is matched only in scale by our sense of responsibility to the community.”

Edward G. Siegal, Board Chair of the CFSEMA states, “We are grateful for Joan and Irwin Jacobs’ continued generosity to the New Bedford community, where Dr. Jacobs was born and raised. Their philanthropy, which ranges from generous college scholarships for New Bedford high school students to investments in the Whaling Museum and local educational institutions, has had a lasting impact on our city.”

The Museum Trustees voted to embark upon a $10 million capital campaign in 2011. A five million dollar goal was set to build endowment and strengthen long-term financial capacity and a $5 million cost was projected to both construct a new Educational Center and Research Library and upgrade existing infrastructure on the Johnny Cake Hill campus. To date donors have contributed 80% ($8.26 million) of the funds needed to meet this $10 million goal.

An early $1 million anonymous gift targeted to the endowment seeded the campaign. “Trustee Gurdon Wattles sparked the building phase by recommending an extraordinary pump-priming $1.15 million gift from the New York Community Trust,” states Rice. This signaling gift spurred other fabulous leadership support from Trustees and close supporters. Importantly 100% of Trustees support museum advancement efforts. The Manton Foundation bolstered fundraising efforts with a $500,000 award earlier this spring. “Now, George and I are profoundly grateful to Irwin and Joan for this catalytic gift which will allow construction to get underway in 2014,” said Rice.

Museum Trustees have long recognized the need for consolidating operations by constructing an educational wing on its Johnny Cake Hill campus. Programs have grown beyond available space and there is an urgent need for dedicated and distance-learning classrooms. The new wing will quadruple classroom space. The Trustees recently adopted a new strategic plan calling for an increased investment in K-12 through post-graduate educational programs. The building will allow for implementation of this plan resulting in a dramatic increase in both the quantity and quality of services offered to the community (currently the Museum estimates it provides upwards of $250,000 in free or discounted programs and services to the community annually).

The building will also house the Museum archives and collections amounting to 750,000 objects and items. It will create 4 new galleries and an extended observation deck overlooking New Bedford harbor. Consolidating campuses will unite research functions, staff and volunteers, now divided by a Research Library located 4 blocks away on Purchase Street. Bolstering the case for construction is an 8% increase in general attendance in 2012 over 2011, plus strong confidence in the business plan. Three years ago Trustees forged ahead despite the recession and renovated the 1916 Bourne Building at a cost of $3.5 million and brought on-line the new Wattles Family Gallery and Captain Paul Cuffe Park, all without incurring debt. Trustee Ed Howland is chairman of the Building and Grounds Committee responsible for overseeing construction. This new building will enhance the attractiveness of the historic district by building on a vacant lot, bring construction jobs into the downtown, create long-term professional museum positions and be another reason for visiting New Bedford for tourists and scholars alike.