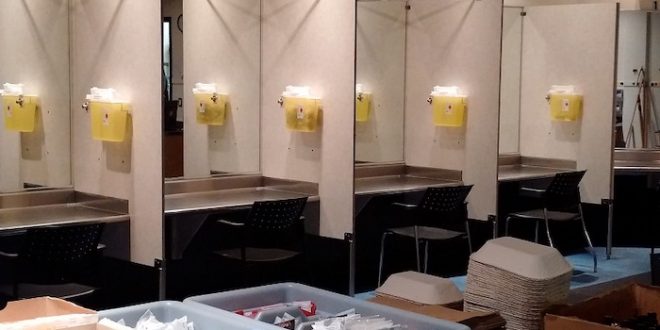 More than two-thirds of lawmakers on a legislative committee endorsed a bill that would launch medically supervised drug-use facilities in Massachusetts, underlining what one sponsor described as a long-running effort to overcome discomfort with the controversial but life-saving proposal.

Thirteen of the Joint Committee on Mental Health, Substance Abuse and Recovery’s 19 members supported legislation creating a 10-year pilot program for at least two supervised consumption sites, where individuals could consume controlled substances, including illegal drugs, without threat of arrest and could be revived from any potential overdose or medical emergency.

Four representatives voted against advancing the bill, which now moves to another legislative committee with an uncertain future and opposition from Gov. Charlie Baker. Two senators declined to support or oppose it.

Every lawmaker who backed the committee’s redraft (H 4723) is a Democrat, but the vote did not break down exactly along party lines: votes against it came from Republican Reps. William Crocker and Alyson Sullivan, independent Rep. Susannah Whipps and Democratic Rep. Angelo Scaccia, an aide to co-chair Rep. Marjorie Decker told the News Service.

Fellow co-chair Sen. Julian Cyr’s office said that five senators voted in favor of the bill and two reserved their rights, but refused to say which two lawmakers did not take a position.

Of the committee’s seven senators, four — Cyr, John Keenan, Cindy Friedman and Brendan Crighton — either cosponsored an earlier version of the legislation or confirmed they voted in support of the rewritten version.

The committee’s endorsement is a major step for the proposal, which has floated around Beacon Hill for years.

The Senate adopted language calling for a pilot program in its version of a 2018 opioid bill, but dropped it during private negotiations with the House. Both branches set up an expert panel, which included Friedman, to study the idea further.

Supporters argue that supervised consumption facilities, sometimes referred to as safe injection sites, will give people struggling with addiction a safe place to consume heroin or other drugs without risk of overdose.

According to the most recent Department of Public Health data, 2,023 Massachusetts residents are confirmed or suspected to have died from opioid-related overdoses in 2019.

Fentanyl has become increasingly common in overdose cases, and because it is so potent — according to the CDC, it is 50 to 100 times more powerful than morphine — it can trigger a fatal overdose in a matter of seconds. Public health experts who support supervised consumption sites say they allow for immediate intervention with the overdose-reversing drug naloxone, a timely response that is critical to preventing death.

“This is a notion that makes people really uncomfortable, and I started out being uncomfortable, too,” Friedman said in a Tuesday interview. “But then when you look at the data and realize it’s not about me, it’s not about us, it’s about saving people’s lives. It’s a really important thing to do, and I’m so glad they did it. I think it’s a big step.”

The committee’s bill would pilot at least two sites over the next decade. Any community would need to opt in to open a site.

Drug users would have to acquire substances outside the facilities. Workers would provide sterile syringes and other injection supplies, and they would also refer users to addiction treatment whenever possible.

It is unclear if there is enough support among legislative leaders to bring the proposal to a full vote in either chamber this session, particularly because the COVID-19 pandemic is consuming almost all attention.

Neither House Speaker Robert DeLeo nor Senate President Karen Spilka indicated Tuesday whether they support or oppose the bill, or what their plans may be for the legislation.

“In this time of crisis, we must be very cautious of the most vulnerable around us, and certainly, that includes those struggling with addiction,” Spilka said in a statement. “I was pleased to see regulatory rules modified during this public health crisis to streamline the availability of medication assisted treatment and I look forward to working with my colleagues to continue the conversation on the committee proposal.”

A DeLeo spokesperson said the bill that cleared the Mental Health Committee “will continue to be reviewed as it goes through the process.”

Baker previously described the idea as a non-starter — even after the panel chaired by his health and human services secretary, Marylou Sudders, recommended piloting one or more sites as part of a statewide harm-reduction strategy — because U.S. Attorney Andrew Lelling has stressed such facilities would violate federal law and draw enforcement.

In October, a federal judge ruled that Pennsylvania nonprofit Safehouse would not violate the so-called “crack house statute” of the Controlled Substances Act by opening a supervised consumption site in Philadelphia.

One day after the ruling, Lelling said he “respectfully disagrees” with the judge’s decision and renewed his argument that the sites are illegal under federal law. “Efforts to open injection facilities, including here in Massachusetts, will be met with federal enforcement,” he said.

Friedman cited the ruling as a key step toward the committee’s embrace of legislation, and she said she hopes the decision will help bring Baker on board.

“We need to be willing to take a chance,” she said. “I think saving these lives is worth it, and I’m going to try to convince people that if we have to go to court, then we’ll let the courts decide. But I think we have a very, very good argument that this is health care. We’re not encouraging people to use drugs. There’s no data that this encourages people to use drugs. We’re keeping people safe.”

The legislation is now pending before the Health Care Financing Committee that Friedman co-chairs. Since former Rep. Jennifer Benson resigned Jan. 8 to become president of the Alliance for Business Leadership, the committee has lacked a permanent House chair, with several duties falling to Vice Chair Rep. Daniel Cullinane.

Friedman said she is optimistic the committee can advance the supervised consumption legislation even with only one permanent chair.

“We have bills we have to report out, and I hope this can be one of them,” she said. “I would push for it, because I’m very much committed to it.”