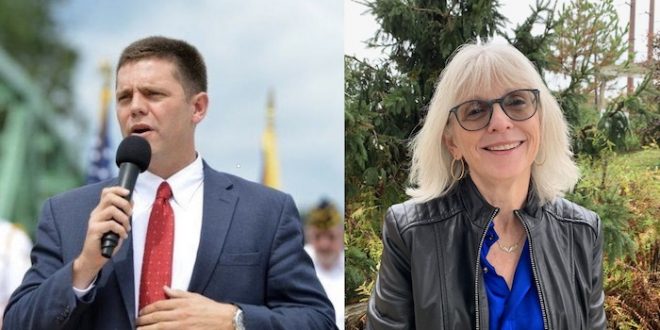 John Velis of Westfield prevailed to take the seat that Don Humason gave up after he was elected mayor of that city, and Susan Moran of Falmouth was elected to serve in a district formerly represented by Plymouth Republican Vinny deMacedo.

The wins leave Republicans with just four seats in the 40-member Senate. The party, whose top officeholders in Massachusetts are Gov. Charlie Baker and Lt. Gov. Karyn Polito, holds 31 seats in the 160-seat Massachusetts House, where veteran GOP Reps. Randy Hunt and Elizabeth Poirier are not seeking re-election.

Both special elections had been scheduled for March 31 but were postponed due to the COVID-19 pandemic and were carried out with both traditional in-person voting and the use of mail-in voting, an option that lawmakers are weighing for the Sept. 1 primary and Nov. 3 general election.

“Two areas that were strong for Donald Trump a few years ago came back home and voted blue tonight,” Democratic Party Chair Gus Bickford said in a statement Tuesday night. “Democrats and independents are united now more than ever, and we will continue to work together through the fall. These two flipped seats are a sign of things to come in a few months.”

Moran, an attorney and selectboard member, beat James McMahon of Bourne, an attorney and supporter of President Trump. McMahon made a bid for state Senate after running in 2018 as the GOP nominee for attorney general, losing that race to Attorney General Maura Healey.

The Cape Cod Times reported that Moran took 55 percent of the vote to 45 percent for McMahon, riding voting margins in Falmouth and Sandwich to victory even though McMahon prevailed in Bourne, Kingston, Pembroke and Plymouth.

Velis, a state representative, veteran and attorney from Westfield, defeated John Cain of Southwick to give the Democrats a seat that had been held for more than two decades by Republicans. Humason had joined the Senate after Republican Michael Knapik, who was elected to the Senate in 1994, gave up the seat.

Moran’s win in the Plymouth and Barnstable Senate district enabled the Democrats to take back a seat that was long held by Therese Murray, the former Senate president. In 2014, deMacedo, a longtime state representative, snagged that Senate seat for the Republicans. Last year, deMacedo resigned his Senate seat to take a job at Bridgewater State University.

“Not only is this a great day for Senator-elect Moran, it’s a great day for her new constituents and their fellow Bay Staters,” said Rebecca Hart Holder, executive director of NARAL Pro-Choice Massachusetts. “Her victory flipped a seat that had been previously held by a staunch anti-choice politician and prevented it from falling into the hands of another.”

On June 2, voters are scheduled to settle two House special elections to fill seats held until recently by Jennifer Benson of Lunenburg and Shaunna O’Connell of Taunton. Benson left the House to work as president of the Alliance for Business Leadership and O’Connell resigned after being elected as mayor of her hometown last November.

The deadline for prospective candidates to turn in nomination signatures to qualify for the 2020 ballot passed in early May. Republican officials are still awaiting final certifications, but expect they will be able to run candidates in at about 55 House districts and eight Senate districts.

Republican Party Chairman James Lyons, who lost his House seat to Democrat Tram Nguyen in 2018, told the News Service this month that party officials have their eyes on the seat that Democrat Rep. Theodore Speliotis of Danvers is giving up, and the district covering Tewksbury and Wilmington that is currently represented by Democrat Rep. David Robertson.

The MassGOP is also planning to compete in the 12th Worcester District, where Democrat Rep. Harold Naughton of Clinton is giving up his seat to join a law firm based in New York. Republican State Committeewoman Susan Smiley is running there.

The MassGOP also sees a chance to be competitive against Rep. Jonathan Zlotnik of Gardner, Rep. Kathleen LaNatra of Kingston and Rep. Josh Cutler of Pembroke. And Lyons said he expects to have five or six candidates running in the state’s nine Congressional districts and two for U.S. Senate.

Democrats are hoping the turnout surge that accompanies presidential elections will help them build on super-majorities in both branches and return an all-Democrat delegation to Washington D.C.