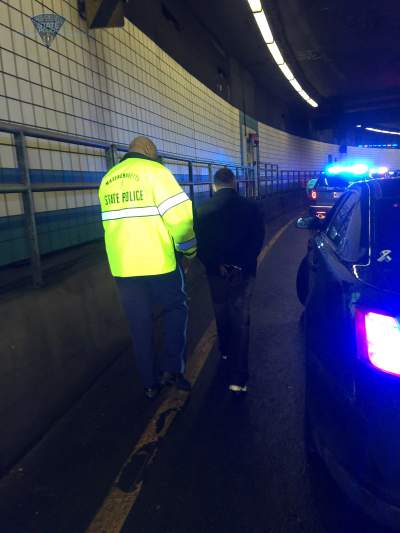 Last evening, at approximately 9:20 p.m., a man called to report he was trapped in a storm drain and could not find a way out of his location. Dispatchers were able to determine the man was located somewhere in the Boston tunnels.

Troopers began searching the area while the man described what he could see. The caller stated he could see white walls with a light blue bottom. Troopers then directed their search to the area of the D ramp and Ted Williams/Connector tunnels. Dispatcher Thomas Zagami asked for all troopers searching to slowly drive through their respective areas with sirens activated in an attempt for the caller to hear them. After approximately 20 minutes, the caller stated he could hear a siren. All Troopers stopped and one by one activated their sirens, narrowing down a more specific area to where the caller was. This led the search to the D ramp.

The D ramp was then temporarily shut down while troopers continued their search for the caller, checking vent slots, doors and ceiling opening areas. While checking the area, Trooper Eric Chin observed a hand waiving from an upper vent on the tunnel wall. Lieutenant David Wilson and Trooper Chin located the man in a vent shaft, approximately 15 feet up, sitting on a pipe attached to the wall.

The man was successfully removed from the vent area. The man was then identified as DANIEL J. KELLY, 27, of Somerville.

KELLY was placed under arrest for trespassing and brought to the State Police Tunnels Barracks for booking.

KELLY was charged with the following:

Trespassing
KELLY was held at the Tunnels Barrack, pending bail and arraignment in Boston Municipal Court.

No further information is currently available. Please do not call the barracks directly.