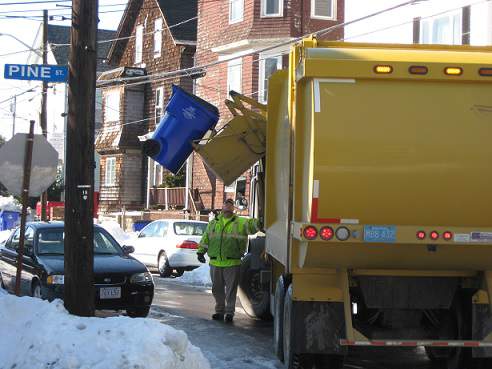 Rolling out the new recycling carts

Ken Blanchard, Director of Facilities and Fleet Services and Marissa Perez-Dormitzer, the City’s recycling coordinator, were on hand at the Appointments and Briefings Committee meeting to show City Council the new roll-out carts for residents. New Bedford residents received notification on the new carts in their February water bills.

55,000 new roll-out carts will be distributed starting in May, Blanchard said, for the new automated residential curbside pickup that begins June 23, 2014. Blue-lid carts will be for trash, and orange lid for recycling. Recycling will now be “single stream” all in one container—no more separating out the paper, plastic, and metals.

Carts will be put curbside in the same location that trash barrels are placed now. The new ABC Disposal trucks have arms that reach out and pick up the carts, then lift and empty them into the truck.

And in case any of the carts get swiped, they’ll be traceable by a bar-code that gives the correct address for each cart. Not quite GPS track-able, said Blanchard, but close. They’ll also have a white strip for residents to write their address on their cart.

ABC Disposal has begun using roll-out carts in Fall River and Plymouth successfully. The benefits are many, said Blanchard. No bags, no sea gulls picking them apart, means cleaner streets.

Morad said she’d received a number of questions on the carts already.

“Is an elderly person going to be able to push it down a seven-foot driveway?” Morad asked. Perez-Dormitzer said that she had used the carts through her four pregnancies, and it was no problem.

Blanchard said the carts were designed for ease in movement, even on stairs, as Councilor Joseph Lopes also asked how elderly in his ward often have stairs to navigate.

Councilor Henry Bousquet of Ward 3 also questioned how some of the commercial restaurants downtown would use the carts, particularly where there were either stairs or no alleyway to store the carts.

“People are going to have to find a way to store them,” Blanchard said. “People used to put their garbage cans in a coop and lock it.” He pointed out that people can find a way to get a Christmas tree to their house, but going the other way…

Bousquet asked that Perez-Dormitzer work on a way to make food waste composting a possibility for the City’s restaurants.

“How can we make that a reality? We could have a really valuable soil for community gardens and parks that we wouldn’t have to pay for,” Bousquet said.

Scott Alfonse, executive director of the Greater New Bedford Regional Refuse Management District, said that high-volume generators of food waste were going to have to find other disposal means. A statewide ban will taking effect in July will be implemented by October of this year.

The District is collaborating on an anaerobic digester being built at the landfill which will take food waste and convert it to methane gas. The existing 3.3 megawatt landfill-gas-to-energy plant will use the methane to generate electricity.

Previous Two Men Rob, Stab Cab Driver in New Bedford
Next One man’s art is another man’s graffiti…Or Black is the New Black