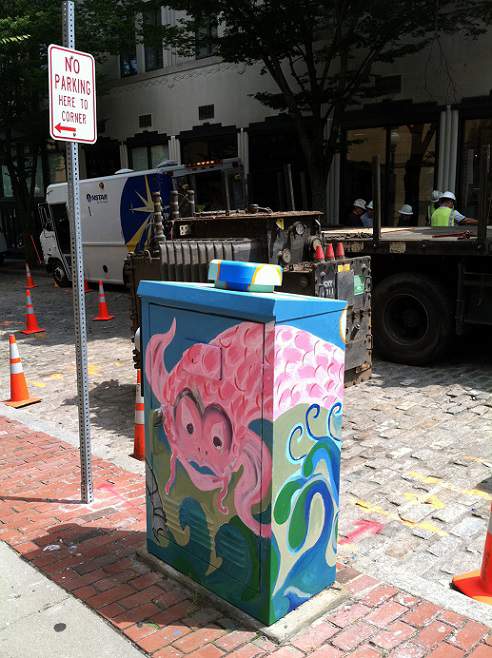 When the Department of Infrastructure painted all the electrical boxes black last summer, Councilor Joe Lopes couldn’t believe it.

Lopes had commissioned artists to paint two boxes, one on Rte. 18 and one in front of the Portuguese Club in the South End of New Bedford, based on a similar project downtown—and paid $250 each. The one on Rte. 18 was painted over, the other “survived” Lopes said due to the protection of club members when the DPI crew went after it.

Commissioner Ron Labelle denied it had anything to do with the “third floor” of City Hall as Lopes had claimed, though.

“I was given the task to remove graffiti,” said Labelle Wednesday at the City Council Appointments and Briefings Committee. “I take full responsibility.”

Calling graffiti a “scourge on the City,” Labelle said he went after it with a vengeance. In July he ordered his crews to paint all the City-owned electrical boxes black, a neutral color that wouldn’t stand out. “The men did a good job,” Labelle said.

One of the painted-over boxes was at the corner of Williams and Purchase opposite Café Arpeggio. That, however, was not graffiti but was painted by an artist-led teen program out of ArtWorks!, the local artist cooperative on Acushnet Avenue, New Bedford.

The painting had been part of a weeks-long outreach program, said Noelle Foye, New Bedford Art Museum/ ArtWorks! director. The project cost about $9,000 all told, but that included designing the project, creating a prototype, and painting the electrical box. It also included $500 for a graffiti-proof coating.

“Getting the kids involved gets them invested in it and the word gets out—don’t mess with that, it’s our art, we did that,” Foye told the Council. She said the program had been paid for with some of the City’s Community Development Block Grant (CDBG) funds, and if they were available again, ArtWorks! would sponsor another outreach class painting project this summer.

Labelle apologized to the artists and the groups involved in the projects. Still, Labelle was not convinced it was a good idea.

“The arbitrary way young men and young women paint something that doesn’t belong to them is inappropriate,” Labelle said. “My concern is that by allowing this, it can send the wrong message. One person’s view of artistry may encourage vandalism. I appreciate what they’re doing. I hope it doesn’t promote something we aren’t happy with later on.”

But the Council agreed with Lopes that involving the City’s youth helped rather than caused a problem.

“Now it’s time to get the kids involved in the community,” Carney said. “I think it’s going to beautify the City.”