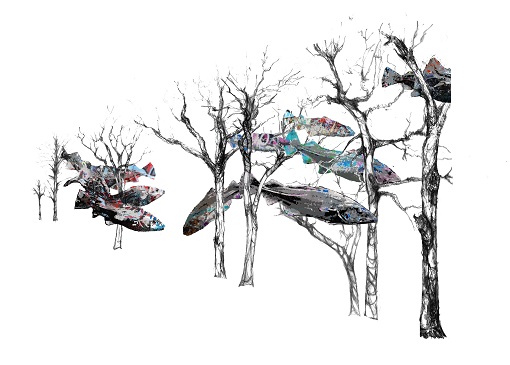 Mayor Jon Mitchell announced today the design chosen for the new public mural that will be painted on the walls of a North Front Street overpass later this spring. The winning design, entitled “School of Cod”, features a colorful school of cod fish swimming through a sea of Elm trees. The design was created by New Bedford artist Alex Jardin, a 2007 graduate of New Bedford High School who also earned a Bachelor of Science in Landscape Architecture from the University of Massachusetts Amherst in 2013.

According to Jardin’s proposal, each fish will be painted using a technique described as a “heavy build up of colorful paints, handstyle letterings and random designs, reminiscent of years of graffiti build up.”

The North Front Street mural is the first public art project spearheaded by the New Bedford Public Art Committee. The Committee was established as an extension of the Mitchell Administration’s graffiti prevention program, Graffiti Free NB. While the prevention program deters graffiti vandalism by making reporting options easier for citizens, it also seeks to engage local artists and encourage the appropriate use of public space for artwork.

The New Bedford Public Art Committee is composed of a team of artists and organizations that Mayor Mitchell has called upon to help foster public art projects throughout the City. Recognizing the importance of public art as a vehicle to promote beautification, neighborhood engagement, community pride and cohesion, Mayor Mitchell and the Committee are working together to support more opportunities for local artists to publically display their work.

“It should surprise no one that we received a number of high quality proposals from New Bedford area artists. For all those who were not selected, please keep the fantastic concepts coming. This mural project is just the beginning of the Committee’s efforts to create more opportunities for public art throughout the city,” said Mayor Mitchell.

The North Front Street mural project will begin this spring with an anticipated completion date set for the end of June. The winning design allows for multiple artists to collaborate and the Public Art Committee is seeking to engage other artists who may be interested in contributing to the mural installation.

Artists wishing to participate in the mural installation are encouraged to contact the City of New Bedford Mayor’s Office at (508) 979-1410.