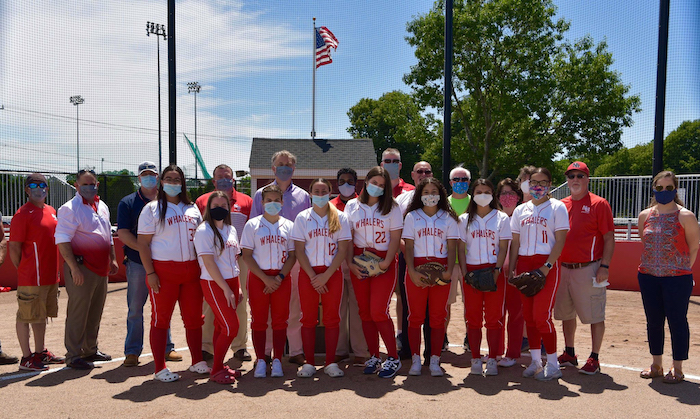 New Bedford Public Schools staff and City officials hosted a ribbon cutting ceremony to inaugurate New Bedford High School’s new state-of-the-art varsity softball field on June 12. While a first game will have to wait until public health guidelines allow, a uniformed contingent of Whaler athletes was on hand to represent their teams and participate in a ceremonial first throw.

Two years in the making, the new field is laid out according to National Federation of High School (NFHS) Softball standards, noted Thomas Tarpey, NBPS Director of Physical Education, Health & Athletics, and emcee of the ceremony, to which only media was invited.

The ceremony will air on New Bedford Cable Access and online.

Mayor Jon Mitchell, whose advocacy for continued improvements to New Bedford High School include renovation of the Bronspiegel Auditorium, locker rooms and the new Bobby Watkins Fitness Center, said, “This new softball field complex adds to New Bedford High’s portfolio of first-rate facilities and amenities. It is an investment for all students to realize their full academic and athletic potential — a flagship school now and for future generations.”

School Committee member and chair of the Facilities Subcommittee Bruce Oliveira added “not only are we pleased to be able to provide a well-deserved, topflight facility for Lady Whalers softball, but I would like to believe that this field provides a ray of hope for a brighter future in this time of uncertainty and unrest.”

Superintendent Thomas Anderson stated “The softball field is another example of our collective commitment to provide the highest quality academic and athletic experiences for our students. As a former Division I collegiate athlete, I cherish the memories and the opportunities I had in high school that prepared me — and I want our students to have the resources and supports to thrive and maximize their opportunities to compete at any level.”
In thanking everyone who had a part in the project, Headmaster Bernadette Coelho noted “This new softball field is consistent with the city and district’s continued commitment to capital expansion, enhancing the experience of New Bedford High School scholars and athletes.”

Girls Softball Coach Harry Lowe looked to the future. “Especially in light of recent events, it’s incredibly exciting to have this new, state-of-the-art field to look forward to. I’m thankful to everyone who helped make this happen and can’t wait to get back out there.”

Groundwork included significant upgrades to the entirety of the field footprint. Work included additive grading, leveling, and layering for optimal drainage using successive layers of sand, soil, sod, and gravel base. A clay infield was installed along with red crushed brick in the bullpen.

The field also features a specially constructed outfield wall designed to accommodate mix use for other sports, such as field hockey in the fall or lacrosse in the spring.

As part of the City of New Bedford’s most recent Capital Improvement Plan, over $250,000 was invested. This was in addition to work by the New Bedford Public Schools Facilities Department, which eliminated overhead costs and saved approximately $150,000, noted Al Oliveira, NBPS Director of Facilities Operations. 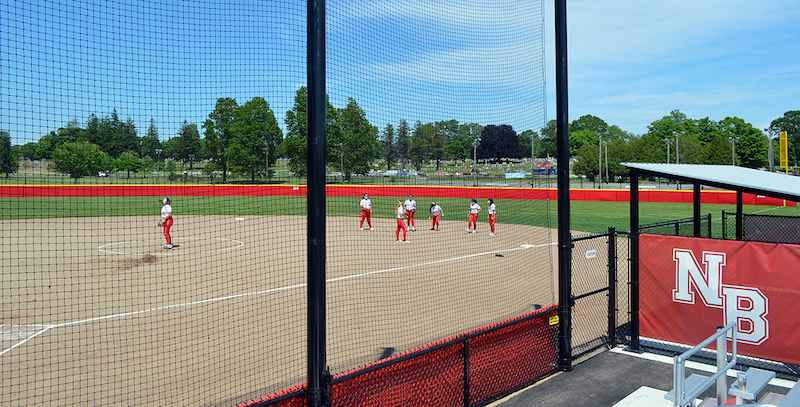 The complex is fitted with NBHS Whaler graphics, created by the NBPS Print Department.

The softball field is the latest major addition to New Bedford High School’s athletic facilities and represents an extensive enhancement to the school’s east campus grounds located along Liberty and Parker Streets. Director Tarpey added “It’s a topnotch athletic facility; no school in the region has a better looking, better appointed softball field.”