Michael Silvia May 12, 2014 Best of the South Coast Leave a comment

Enrichment toys were given to Emily and Ruth, two Asian Elephants at the Buttonwood Zoo in New Bedford, MA on Friday, May 9, 2014.

“Toys for Elephants” is an interdisciplinary elective class for students at Massachusetts College of Art & Design (MassArt), in collaboration with non-profit organization Handshouse Studio. This annual one-semester class challenges students to design and build cognitive tools – or “toys” — that enrich the lives of elephants in captivity by engaging their natural behaviors and stimulating cognitive thought processes. The Toys for Elephants program is now in its 4th year at MassArt, the nation’s first and only independent public school of art and design. Handshouse Studio is a non-profit organization that creates educational projects outside of the traditional classroom setting that link subjects – including history, science, math, literature, arts, culture and technology – through the study of a single object. Through the collaborative venture “Toys for Elephants”, MassArt and Handshouse bring students together from diverse disciplines including industrial design, architectural design, art history, art education, sculpture and a range of 2D and 3D fields to learn from each other, design, build and problem-solve.

Toys for Elephants draws on a range of art students’ interdisciplinary design skills to solve a real-world problem: keeping elephants in captivity cognitively and physically stimulated. Due to natural habitat destruction and poaching, Asian, Sumatran, Indian and other elephant species are on the endangered species list. Zoos across the country provide shelter and hope for these endangered animals. However, even with specialized habitats and conservation initiatives, living in captivity presents challenges for such highly intelligent creatures. Elephants in captivity are known to display stress behaviors such as tracing the same route over and over again and trunk swaying or rocking back and forth. For animals that thrive in social groups, being in captivity also deprives elephants of this key social interaction. Keeping such highly intelligent animals alert and active in captivity requires specially designed tools that can enrich their daily lives.

In 2010, long-time MassArt Professors Rick and Laura Brown, Founders of Handshouse Studio, learned of two beloved 8,000 lb. Asian elephants named Emily and Ruth living at the Buttonwood Zoo in New Bedford, MA. After speaking with the zoo’s directors and learning about the elephants’ need for stimulation, they realized that this would be the perfect challenge for their design students at MassArt. Rick Brown designed the “Toys for Elephants” program and introduced it as an elective course at MassArt, in collaboration with Handshouse Studio. Now in its third year, the Toys for Elephants program and its innovative approach to interdisciplinary design and problem-solving, hopes to serve as a model for similar programs at zoos across the country.

Toys for Elephants is a one-semester class that begins with students meeting the elephants at the Buttonwood Zoo and studying their behavior. Students work closely with Zookeeper Bill Sampson and place themselves in the elephants’ environment to grasp the challenge of creating objects that are sturdy enough and complex enough for the powerful yet curious animals. After several weeks of research, students draft designs and present them to the zoo for feedback. With input from the zookeeper, and upon faculty approval, several of the student designs are selected as finalists. Construction takes place on campus at MassArt and at Handshouse Studio’s artist space in Norwell, MA. Once completed, Professors Rick and Laura Brown and the MassArt students present the completed “toys” to Emily and Ruth at the Buttonwood Zoo. The public is welcome to attend the presentation to observe as the elephants interact with their new “toys.” 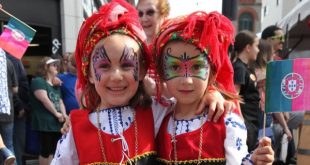