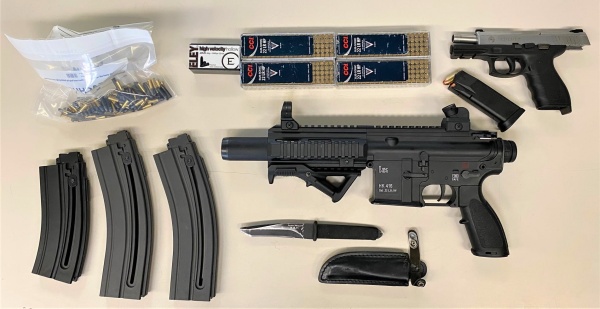 At 12:45 a.m. this morning, Trooper Rudy Tryon was on patrol on Adams Street in Dorchester when he observed a 2010 Honda Accord with both license plate lights not working, a violation of motor vehicle law. Trooper Tryon conducted a motor vehicle stop. When he asked the operator for his driver’s license, the man admitted that his license was suspended.

Boston Police units responded to the scene to assist with the stop. A query of the driver, identified as MICHAEL WILLIAMS, 40, of Chelsea, confirmed that his driver’s license was suspended and also revealed that he did not possess a license to carry a firearm or a Firearm Identification (FID) Card. The officers called for a tow truck to take the vehicle.

When told that the car was being towed and would be subjected to an inventory search, WILLIAMS stated that he did not want the car searched. As Trooper Tryon started to inventory the car, WILLIAMS sprinted away. He was chased on foot and apprehended by Trooper Tryon and several Boston officers. The suspect resisted being taken into custody but was eventually subdued and handcuffed in a backyard on Adams Street.

Trooper Tryon then resumed his inventory search of the Accord and located, in the center console, a Taurus PT 24/7 Pro .45 caliber handgun, with a round in the chamber and an additional round in a high-capacity magazine capable of holding 12 rounds. In the backseat was a black laptop bag that, when handled, appeared to contain another firearm. Inside the bag the Trooper located a loaded .22 caliber assault-style pistol with an inserted magazine loaded with 29 rounds. The Trooper also found in the bag two more magazines, one loaded with 33 rounds and the other with 29 rounds, as well as an additional 450 rounds of .22 caliber ammunition. A knife was also located in the car.

WILLIAMS was transported to the State Police-South Boston Barracks and booked on the following charges:

WILLIAMS was additionally criminally cited for operating after suspension and given a civil citation for a lights violation. He was held pending his expected arraignment in Dorchester District Court today.