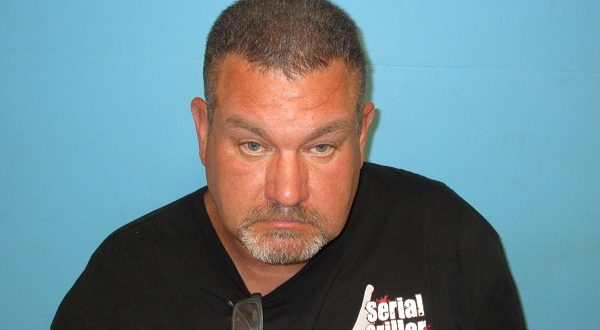 On Saturday, August 31, at approximately 8:10 p.m., Dartmouth Police received a call from a female that the male operator of a dark-colored pickup truck bearing a Virginia registration had allegedly pointed a gun at her while they were stopped at the traffic lights located near Shaw’s on State Road.

After more detailed information regarding the description of the pickup truck was relayed to responding units, Officer Alec Grant located it on Faunce Corner Road near Lowe’s. Due to the possible involvement of a firearm, a felony stop was conducted.

Subsequent to the operator being safely removed from the vehicle and secured, he was identified as Michael Couture, 56, of Wallace Road, Hampton, Virginia.

During the investigation which followed, officers located a loaded 9 mm Ruger handgun inside of Couture’s truck. In addition, officers also located an open bottle of alcohol, as well as several other empty bottles and cans of alcohol.

While speaking with Couture, he admitted that he had been involved in a road rage incident.

As a result of the investigation, Couture was placed under arrest and charged with assault with a dangerous weapon, carrying a loaded firearm without a license, carrying a firearm while intoxicated, improper storage of a firearm, negligent operation of a motor vehicle, operating under the influence of liquor (2nd offense), possession of an open container of alcohol inside of a vehicle.

No one was injured as a result of this incident. The arresting officer was Darren Emond.