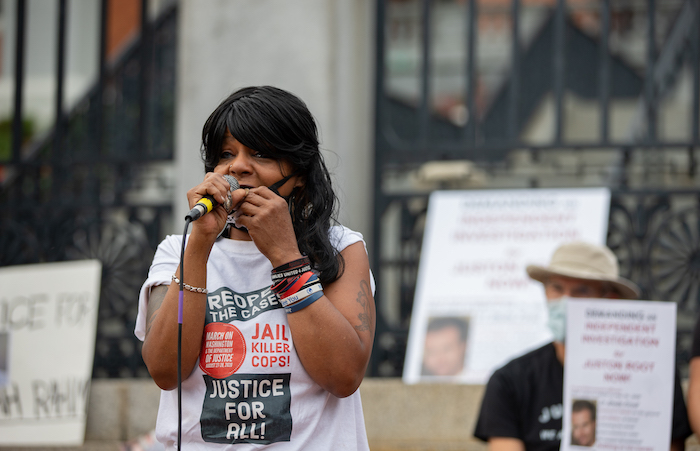 Standing in front of the State House steps, Hope Coleman recounted the death of her son Terrence, shot in 2016 by Boston police. [Sam Doran/SHNS]

Rahimah Rahim, the mother of Usaamah Rahim, said her son was a good man and cared about other people.

Usaamah Rahim was shot and killed by a Boston police officer and an FBI agent in 2015 after police officials say he approached officers with a knife. Rahimah Rahim attended the rally organized by Mass. Action Against Police Brutality to call on Gov. Charlie Baker to assign a special prosecutor to reopen all past cases of police brutality in the state.

Among the cases the group wants a special prosecutor to investigate are the deaths of Massachusetts residents Terrence Coleman, Eurie Stamps, Usaamah Rahim, Burrell Ramsey-White, and Juston Root.

The protest comes just over three weeks after police in Kenosha, Wisconsin shot Jacob Blake, whose severe injuries furthered nationwide protests calling for an end to systemic racism and police brutality. The protest on the State House steps Wednesday was held in solidarity with Blake’s shooting.

Rahimah Rahim said she raised her five children to be respectful citizens and to look out for other people who didn’t have the privileges they had.

“How many other mothers have to lose their children to this brutality? How many more of us have to lose our relatives, our families? It’s genocide,” Rahimah Rahim said. “We cry out as Americans about what’s going on in other countries. We cry for the people who are being persecuted there. What about us? Cry out for us. Cry out for us.”

At a press conference earlier in the day, Baker said he didn’t know if he had the authority to reopen closed cases.

“It’s always been my impression that the state official who has the most latitude with respect to reopening cases is the attorney general,” he said. “And I do know the attorney general can choose to take cases that DAs either don’t take or aren’t interested in. I don’t know if the attorney general has the authority under existing law to reopen a case that’s been closed. And as I stand here, I don’t if I do either.”

Organizers of the rally said their effort had the support of nine families of men shot by police in the state, some of whom showed up to share their stories. Among them was Hope Coleman, the mother of Terrence Coleman.

Terrence Coleman, who was diagnosed with schizophrenia, was shot in 2016 by Boston police after his mother called for an ambulance to take him to the hospital. Prosecutors allege he attacked personnel responding to the call with a knife.

“All I heard was two shots,” Hope Coleman said Wednesday. “I didn’t hear him holler.”

Brock Satter, co-founder of Mass. Action Against Police Brutality, started off the evening with a chant, “Indict, convict, send those killer cops to jail. The whole damn system is guilty as hell.” As he called on Baker to appoint a special prosecutor, Satter responded to the governor’s comments from earlier in the day.

Jennifer Root Bannon, whose brother Juston Root was killed by police in February, filed a wrongful death suit in U.S. District Court in Boston on Aug. 10. Police shot at Root 31 times after he led them on a chase from Brigham and Women’s Hospital in Boston into Brookline with a replica gun. The six Boston and State Police officers involved in the shooting were cleared by prosecutors.

On Wednesday, Root Bannon called for an end to police brutality and for officials to hold accountable officers who break the law. She said the departments need mandatory independent investigations by an impartial department for incidents involving deadly and excessive force.

“Not only here in Massachusetts but across this country. Today, the message I want to make very clear: law enforcement cannot, I say cannot, be investigating themselves. Continuing on this current path will never bring about justice,” she said. “Gov. Baker, I’m going to ask you again, reopen my brother’s case for an independent investigation. Reveal the truth.”

Two pieces of legislation to reform police accountability and curb use of force tactics remain in conference committee, where lawmakers negotiate differences between bills behind closed doors. The Senate first passed its version on July 14 and the House followed suit with similar legislation on July 24.

The bills largely do the same thing — set up an independent body to certify and decertify police officers in the state. The bills also limit the use of chokeholds and tear gas, and restrict qualified immunity from civil lawsuits for police officers accused of alleged misconduct.