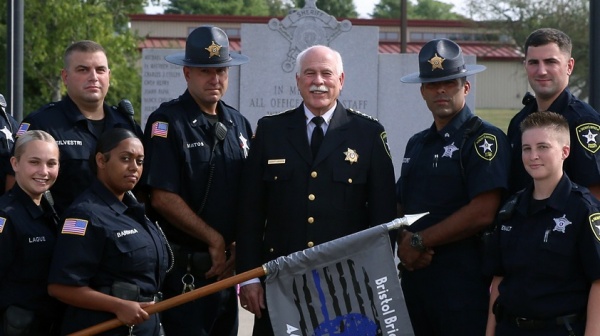 The crowd was small, but the smiles and congratulations were enough to fill an auditorium.

The Bristol County Sheriff’s Office hosted a socially distant graduation ceremony for cadets in the 46th Correction Officers Academy Wednesday night at the correctional complex on Faunce Corner Road. To comply with gathering protocols, each graduate was only able to invite one guest, and staff attendance was limited.

The smaller crowd didn’t lower the enthusiasm as the 15 graduates were met with thundering applause and congratulations after taking the oath and officially becoming the newest law enforcement professionals in Bristol County.

“You’re ready to make your mark on your neighborhood. You’re ready to make your community safer by helping those most at risk. You’re ready to be a coach, a mentor and a friend to those in need by giving encouragement, discipline and guidance to individuals getting ready to return to society,” Sheriff Thomas M. Hodgson told the graduates. “You are now working in one of the most impactful and rewarding professions. Every day on every shift, you will have the opportunity to help people get on a path to a better place in life. You’ll make the world a better place.

“For that, you deserve the world … or at the very least, a gallery of cheering family and friends.”

Over the course of the eight-week training academy, graduates did a mixture of classroom and hands-on learning on a variety of corrections topics, including everything from policy and procedure to defensive tactics and first aid. But the most important lessons of the academy were communication and teamwork.

Judging from the comments from the class officers, it’s safe to say “mission accomplished” on that front.

“During the eight weeks, we were challenged mentally and physically,” said Nicole Arsenault, class president. “As the days went on, acquaintances became friendships and 15 individuals became one team.”

“I’m blessed to call these 14 other officers not just friends, but brothers and sisters,” said Tina Chute, class valedictorian who finished with a 98.61 average.

The class earned a guidon, a special marker used throughout history in the military and law enforcement to signify unit designation. The guidon is awarded by the training staff based on the class’ teamwork and togetherness; not every class receives the honor of carrying a guidon to graduation like this class did.

Academy Director Lt. Robert Matos thanked BCSO leadership and his team in the training division, including Sgt. Moses Isidoro and Correction Officers Amanda Custodio and Robert Lavalette, while urging the graduates to reach for new heights in their law enforcement careers.

“Just remember as you go through your career to choose a goal and strive for it,” he said. “Whether it’s a K9 officer, investigator or even in the training division, keep striving to that goal.”

The Bristol County Sheriff’s Office has openings in the next Correction Officers Academy, which is slated to start in January 2021. Anyone interested can visit http://www.bcso-ma.us/employment.htm for a job description and a downloadable application. For more information about joining the BCSO team, please contact Human Resources Director Caitlin DeMelo at caitlindemelo@bcso-ma.org or 508-995-6400 ext. 2344.