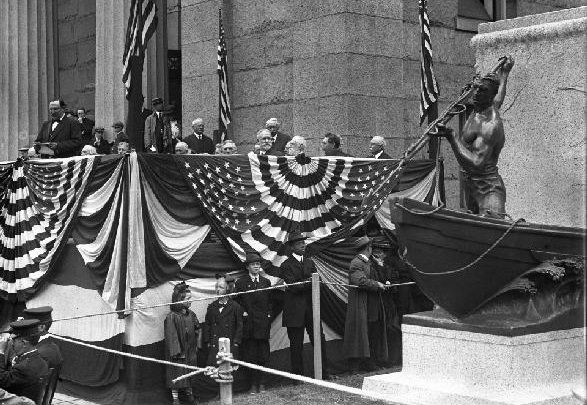 Forging of an Industry
A hundred years ago the city of New Bedford was a whale of a difference apart from the city it is today. I won’t make the case for being better or worse, as that’s a debate that will bear no fruit and get ugly fast. The truth is likely somewhere in the middle. The 19th century was for the most part kind to New Bedford in financial terms. While for many the thought of harvesting whales conjures up heating and lamp oil, almost the entire whale was used. The blubber and oil would produce candles, varnish, machine lubrication, soap, and paint. The baleen and teeth would create piano keys, toys, chess pieces, corsets, buggy whips, Scrimshaw, fishing poles, umbrella ribs, typewriter springs and more. Basically the plastic of the 19th century. The ambergris or biliary secretion from a whale’s intestines was originally used -even by ancient Egyptians- as incense, food flavoring, treatment for ailments ranging from headache to epilepsy and even as an aphrodisiac. In the 14th century during the Black Plague, it was considered a lucky charm to ward off contagion. In the “modern” 19th century it was in high demand as an integral ingredient in perfume.

To support the whaling meant a number of side businesses and industries such as ship building, carpentry, refineries, sail-making, outfitters, cordage manufacture, iron-smithing, boarding houses, and more. As with any city that is booming economically, the economic flow attracts unrelated business period. Real estate exploded. Textile, flour and coal mills couldn’t be built fast enough. The rail came through, theater, schooling and art thrived, banks were seemingly on every corner, unskilled laborer was in high demand which drove up immigration, and of course a fair number of black market and illegal activities cropped up. Just about any type of business could thrive in that kind of environment. To put it into perspective, by 1840 New Bedford accounted for almost half of the world’s whaling. Such was the profound economic effect that whaling had on the city of New Bedford.

So it goes without mention that New Bedford owes it success to the foresight, work ethic, and industry of its 19th century forebears. They created a prosperous atmosphere that allowed many livelihoods and families to thrive. One such person relevant to this article that made out particularly well was William W. Crapo (1830-1926). Mr. Crapo was educated in New Bedford schools before achieving his law degree from Harvard Law School in Cambridge. Once passing the bar, he came back to his beloved city to practice law which he did for an astounding 43 years. Because of how well the city was prospering, in addition to his practice Mr. Crapo was a City Solicitor, elected to the Massachusetts House of Representatives, declined a State Senate seat, Chairman of the first Public Water Supply Commission which eventually became the Water Board, elected to the forty-fifth Congress, on the Committee of Banking & Currency and many local business’ board of directors. That’s the abbreviated version.

A gifted Sculptor and a proper Model
For obvious reasons, Mr. Crapo was grateful for the opportunities that were presented to him. New Bedford had provided a place for him to live a successful life, generously provide for his family, and he wanted to give back in more ways than political service. In 1912, he commissioned Renaissance Man and prodigy Bela Lyon Pratt for $25,000 (estimated $475,000 today) to build a memorial statue to pay homage and tribute to those whalemen who built New Bedford into the economic powerhouse that allowed him to thrive. Bela Lyon Pratt was a rather unique personage who is a fascinating story unto himself who had been producing stunning sculptures out of beeswax by age five. Pratt maintained a studio in Jamaica Plains, and had produced a total of 180 pieces of sculpture by the time of his early death at 49 years of age – a few scant years after completion of the Memorial Statue. In 1912 alone he completed fifteen sculptures. A prodigious volume for any artist let alone sculptor. Sadly, he passed away at the young age of 49 on May 18th, 1917.

With blessings from historic icon Mayor Charles Ashley, Pratt used as a model, local boatsteerer – the person who used the forward oar to get close to a whale, then do the actual harpooning – Richard McLachlan. Yes, the statue is the image of an genuine whaleman! Behind the bronze and granite statue is the inscription “A Dead Whale or a Stove Boat. In Honor Of The Whalemen Whose – Skill Hardihood And Daring Brought – Fame And Fortune To New Bedford – And Made Its Name Known In Every – Seaport The Globe – Gift Of W.W. Crapo,” which hearkens to the spirit and mindset of whalers in 19th century. Pratt completed the statue the same year it was commissioned and it was placed at the New Bedford Public Library on 613 Pleasant Street. Thousands showed up during the dedication ceremony on June 20, 1913 and the iconic statue was unveiled by the oldest living whaling Captain alive George Baker.

The Statue Today
Since then the statue that Crapo commissioned and Pratt built has made its way on just about everything from Christmas tree ornaments, coffee mugs, t-shirts, in movies, on postcards, and every type of souvenir imaginable. As we approach the 100th anniversary the city will have a centennial celebration and many of Pratt’s relatives from around the country will be present.

From whaling to glass and textiles, the new industry that New Bedford is looking into the future with is offshore wind. If New Bedford uses those attributes its forebears possessed – foresight, industrious work ethic, perseverance – in this new industry, it is sure to be securing its future and will succeed. Maybe we can have another memorial statue commissioned!

Special thanks as always to the New Bedford Whaling Museum and Spinner Publications for their generosity with the images. In addition, similar generosity from Bela Lyon Pratt’s Estate Website for the in progress and ledger images.

When Joe isn't writing, he's coaching people to punch each other in the face. He enjoys ancient cultures, dead and living languages, cooking, benching 999#s, and saving the elderly, babies and puppies from burning buildings. While he enjoys long walks on the beach, he will not be your alarm clock, because he's no ding-a-ling.
Previous Forgotten Occupations of New Bedford’s Yesteryear; Of Lamplighters, Milkmen, & Town Criers
Next Breaking the Silence About Sexual Assault and Child Abuse