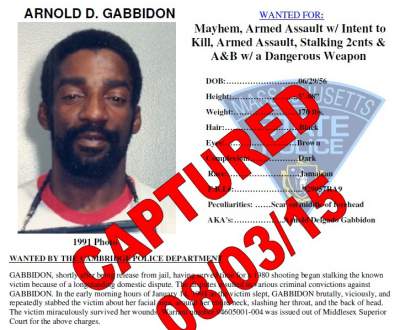 One of the Massachusetts State Police Most Wanted fugitives who is accused of savagely assaulting his ex-girlfriend — stabbing and slashing her as she slept in 1994 — before fleeing the country was returned to Massachusetts last night to answer to the charges.

The Massachusetts State Police Violent Fugitive Apprehension Section, Cambridge Police, and the United States Marshals Service tracked ARNOLD GABBIDON, 59, to Jamaica, where he was living with a relative.

GABBIDON was arrested in Jamaica on Aug. 3, 2015. His extradition was processed and he was flown into Boston last night. He will be arraigned in the near future in Middlesex County on charges of armed assault with intent to murder, assault and battery with a dangerous weapon, mayhem, threats to commit a crime, armed burglary, stalking, and malicious destruction of property. His case is being prosecuted by the office of Middlesex District Attorney Marian Ryan.

Evidence indicates that in the early morning of January 14, 1994, GABBIDON — who had been stalking an ex-girlfriend — broke down the door of the woman’s Cambridge residence, stabbed and slashed her as she slept, leaving her for dead. The victim was able to call Cambridge Police and miraculously survived her wounds. GABBIDON fled the area.

Across the ensuing years, investigators continued their pursuit of GABBIDON. As a result, intelligence was developed that GABBIDON was hiding out in Jamaica, living with a relative. Specifically, he was living in Recksford District, Clarendon, Jamaica

The United States Marshals Service joined the case to provide additional assistance. A US Marshals Task Force confirmed the location where GABBIDON was living. He was taken into custody early last month and had been held ever since until his extradition yesterday.

Previous Inside Out: The New Bedford Fishing Industry Through Industry Eyes
Next 16 Things to do this Weekend (Sept 04 – Sept 06)