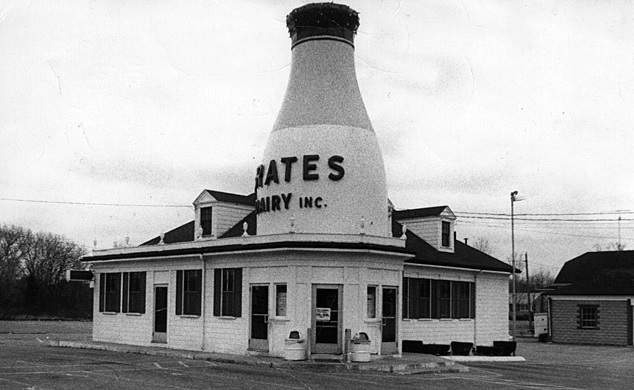 Ah…the iconic Frates Milk Bottle! Funny how something so simple in terms of marketing can be so effective. If our mom and dad asked us where we wanted to go to have ice cream, it was EASY: Frates! If a parent would have asked why, we would have used their own quip against them: “Because.” People would say “What is the big deal? It’s not like you go anything from going to a place that was a giant dairy bottle.”

You got excitement. You got juiced. You got jazzed. Your imagination would kick in and you could imagine it full of milk – or even ice cream – and you are swimming about in it. The giant milk bottle was fun. Pure and simple.

The Frate’s Dairy & Ice Cream bottle was built as one of three circa 1930 by designer Les Labrose at 2840 Acushnet Avenue by the Frates family*. The other two being in Boston and Raynham. This location made generations of kids happy, but it wasn’t the Frates family’s only spot. They also had a shop in the South End of New Bedford on the corner of South Water Street and Cove Road. Of course, when Route 18 came along, the location got the boot.

The milk bottle, which stands 52 feet high and was painted to look like the real deal: full of milk with a bit of cream at the top. Well, the real deal if you are old enough to remember that cream separated from milk and came in bottles – and even was delivered to your doorstop by a milkman. Explain that one to your kids and they’ll think you’re pulling their leg.

Some time in 2003 Crystal and Scott Vurpillatte purchased both the building and the business and called it “Tali” after their daughter. Business did not do so well and by 2005 the bottle was up for sale. A year later G&S Pizza bought it and moved from a few buildings away. Yes, they serve ice cream from Spring through Summer!

Some stellar photos on the outstanding WhalingCity.net.

* A story shared on WhalingCity.net states that the bottle “…was not designed and built by the owners, but by Jethro O. Ashley (1897-1975), carpenter and aviator.” A fan has stated “Frates bottle was built by Dosithe Guilotte who owned New Bedford Lumber. He was my grandfather.”

When Joe isn't writing, he's coaching people to punch each other in the face. He enjoys ancient cultures, dead and living languages, cooking, benching 999#s, and saving the elderly, babies and puppies from burning buildings. While he enjoys long walks on the beach, he will not be your alarm clock, because he's no ding-a-ling.
Previous New Bedford Man Arraigned for October Murder in Fairhaven
Next Red Cross Blood Drive Returns to the Fairhaven Rec Center