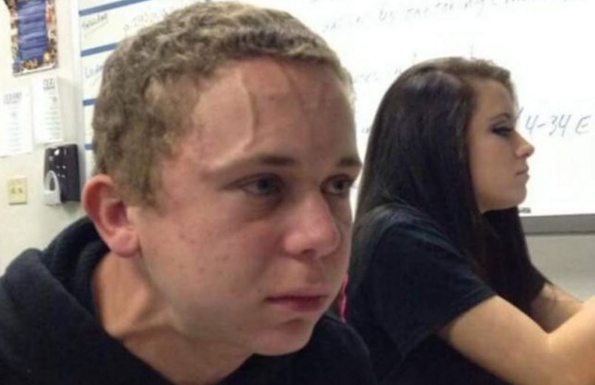 “As most of you are already aware by now, last Saturday our department was involved in a standoff for several hours with a young man on Dartmouth Street.

As we do each time a major incident is shared on both social media and with the various media outlets, we review comments posted by the masses, in an effort to see if we can obtain any information that could prove useful to us moving forward.

While the comments posted about this particular incident were, for the most part, positive and supportive regarding our response, we also saw some that referred to it as “overkill,” with some people telling us that we could “do better, ” and that a couple of cops should have just tackled him.

Though we both understand and appreciate that the majority of these negative comments towards us came from individuals who know this particular family, we still felt it necessary to respond in such a way that might better explain how and why we handled this situation the way we did.

Before I get started on the breakdown of the incident, let me first take the fact out of the equation that this involved a local family, because as police officers we are sworn to protect and serve EVERYONE without bias, and, on this particular day, this young man put everyone at risk, including himself, thus making him no different in our eyes than a transient staying at one of the motels.

To get a better understanding of what occurred leading up to the standoff, here’s a brief synopsis of the incident, as written by the reporting officer:

Dartmouth officers went to the residence on Dartmouth Street to arrest the young man, who had three (3) outstanding warrants, and was wanted by Probation.

Upon arrival, the officers met with his parents, and confirmed that he was home.

After his father told him that the police were there to arrest him, the young man armed himself with a knife, and started carelessly, and violently, wielding it towards the officers. In response to his threatening, and potentially deadly behavior and actions, the officers deployed their electronic control devices (commonly referred to as “tasers”) towards the young man. Because the electronic control devices rendered little to no effect on the young man, the officers removed the parents from the residence, and tactically retreated until more help could arrive on scene.

As the young man remained confrontational and uncooperative towards officers while still armed with a knife, the decision was made to request that S.W.A.T. team members and negotiators from the Southeastern Massachusetts Law Enforcement Council (SEMLEC) respond to the scene.

While waiting on the arrival of SEMLEC, the young man continued to remain uncooperative. He would occasionally yell at the officers to shoot him, and even live-streamed the event from his perspective on social media.

Upon the arrival of SEMLEC, the young man exited the house, and once again wielded the knife at one of the S.W.A.T. team members, before retreating back inside.

After negotiators were unsuccessful in talking the young man outside after several hours, the decision was made for S.W.A.T. to enter the residence.

After S.W.A.T. team members breached a window, the young man exited, and was taken into custody.

As a police officer, I could not be more proud of how this incident was handled from the onset, and, frankly, initially took exception to the negative comments posted towards us. However, after taking a deep breath and thinking about it for a moment, I came to the understanding that most people these days get their perspective on law enforcement from television, movies, press releases, and social media, and don’t fully understand what a day in our life consists of.

First off, for those of you who default to mental illness every time something happens, please know that we are well-trained in dealing with people who suffer from mental illness, and, for the most part, can diffuse a situation by using either the gift of gab or the services of one of the clinicians who we frequently work closely with. However, the scary thing about mental illness is its unpredictability. Just ask any clinician! The ability for a calm person to turn aggressive and dangerous can happen without advanced notice, thus requiring us to think not only about our safety, but also about the collective safety of others, including the person in crisis.

While addressing the use of S.W.A.T., let us first explain what the acronym stands for: Special Weapons and Tactics. Thanks to television, movies and the Internet, most people default to the W, as we always see the team members, dawned in everything that is Velcro, shooting up the bad guys, and saving the day. This IS NOT reality! In reality, and speaking from experience, people should be drawn more to the T, as in most cases it is the tactics that the team members use that generally leads to a peaceful ending, as was the case last Saturday. Though not part of the traditional acronym, we could also insert a second T, for Time. When S.W.A.T. shows up, they slow things down and make the scene safer for everyone, after which time they discuss every possible option, because, in all honesty, there is no need to rush into an already hostile situation, when the main goal is always the preservation of life.

As far as addressing the “Why so many cops? A couple of them could have just tackled the kid,” posters out there, you don’t deserve an explanation, because that theory is just plain foolish!

It also seemed like a lot of people were upset (that might be putting it lightly) about us publicly posting both his name and image. To that, all I can tell you is that it is newsworthy, and the public should know. If you think that we can shut down a major thruway and surround a house with dozens of officers for the entire day without the media taking note, you need to think again. In addition, and though we hope this young man gets the help he needs if he indeed suffers from mental illness, the public deserves to know that in his current state of mind, he could be potentially dangerous.

Also, and this goes back to the fourth paragraph, we cannot be bias just because he is a well-known resident of Dartmouth. We post dozens of criminals yearly who are not Dartmouth residents, and rarely do we ever see people come to their defense, and tell us how they must be suffering from mental illness. Again, though we get it, we have a responsibility to inform the community.

Though I could go on and on explaining what goes on during a critical incident from a law enforcement point of view, in the end it is going to be up to you to form your own opinion(s) about how we handle things. However, I truly hope that this helps provide a little knowledge to those of you who thought that our response was “overkill.”

To those of you who think that we can “do better” next time, I don’t fully disagree with you, as we are constantly learning, training, and preparing to better ourselves in every way, shape, and form possible. However, for me to say that we could have done things better in this situation, well, I would just be lying!