Home / History / Celestino Medeiros; In the shadow of Sacco and Vanzetti 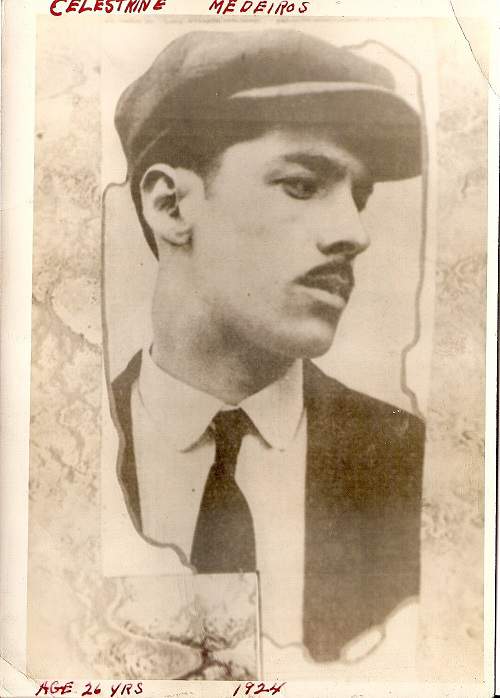 Celestino Medeiros; In the shadow of Sacco and Vanzetti

The Story of Nicola Sacco and Bartolomeo Vanzetti
What famous names come to mind when thinking of New Bedford?  Some names that may pop into one’s head immediately are Herman Melville, Frederick Douglass or possibly Hetty Green, the “Witch of Wall Street.”  One man whose name probably wouldn’t make it to your list but nonetheless was very famous or rather infamous in his own time was Celestino Medeiros.  He is totally forgotten today, yet in 1927 his name was on the lips of thousands and in the headlines of newspapers around the world.  He lies buried in a pauper’s grave in the City of New Bedford at the Pine Grove Cemetery marked only as grave 339.

The reason for his short-lived notoriety was his involvement in the world famous Sacco-Vanzetti Case.  In 1921 two immigrant Italian anarchists, Nicola Sacco and Bartolomeo Vanzetti were tried, convicted and then sentenced to death for the brutal murder and robbery of a paymaster and his guard while delivering a payroll of about $15,000 to a shoe factory in South Braintree, Massachusetts.  The case became a cause célèbre among many left wing groups and gained worldwide attention.

The common belief among the Sacco-Vanzetti supporters was that the two had been “railroaded” by a corrupt capitalist judicial system for the sole reason that they were both Italian and anarchists.  These supporters believed that the two were totally innocent of the crime.  The propaganda put out by the Sacco-Vanzetti Defense Committee created a whirl-wind of fervor over the case. There were protest marches to free Sacco and Vanzetti all around America and Europe and as far as Japan.  After 1921 there were several motions for a new trial none of which were accepted.  Then in 1925 there was a break in the case, one that looked like it might save Sacco and Vanzetti from the electric chair.

Awaiting Conviction Appeal
On November 18th, 1925 Celestino Medeiros, awaiting an appeal of his conviction for killing a bank clerk in a botched robbery in Wrentham, passed a note made out on a slip of paper to a trustee at the Dedham Jail.  Medeiros’ instructions were to bring the note to Nick Sacco who was a few cells down.  Sacco received the note and opened it:  “I hereby confess to being in the South Braintree Company crime and Sacco and Vanzetti was not in said crime,” the note stated.  Sacco immediately contacted his lawyers and soon they had Medeiros writing out a full confession for them. In his full confession he related that he was in the getaway car sitting in the back seat with a gun and instructions to shoot anyone that came up to the car during the robbery.

He further stated that the gang he was involved with was a gang working out of Providence and New Bedford that had been involved in stealing shoe shipments. Medeiros refused to name the members of the gang but he did say they had double crossed him and not paid him for the job. Out of some warped sense of honor among thieves or some criminal code that he perceived he would not budge and never gave up the names of the gang involved.

Sacco and Vanzetti’s lawyer however investigated with what little information Medeiros had given and found a gang working out of Providence and New Bedford with some members who had been arrested for stealing shoe shipments from none other than the Slatter Morrill Shoe Factory in South Braintree where the murder-robbery of which Sacco and Vanzetti were accused took place. This gang turned out to be the notorious Morrelli gang headed by the two Morelli brothers Joe and Frank (also known as “Butsey”).  Later, Butsey would become the first Don, or Godfather, of the New England Mafia.

Who was Celestino Medeiros?
Who was this Celestino Medeiros from New Bedford and how did his life go so wrong?  Celestino F. Medeiros was born on March 9th, 1902 at Villa Franca, San Miquel of the Azores Islands.  He and his parents immigrated to New Bedford around 1904.  He attended school in the city until about the age of 15. He did not do well in school due to a problem with his eyesight, which may have been connected to his having epilepsy.  It seems he had petite mal seizures and would have blackouts; he would also go blind for long periods of time. Herbert Ehrmann in his book “The Untried Case” states “because of this defect it was at first thought the lad was of subnormal intelligence, but as he matured this apparent sub-normality disappeared. At the time of his trial in 1926 his intelligence rated at least average if not higher.”

By the age of 14, Medeiros was well on his way to a life of crime with a rap sheet of 12 arrests and a court record of 12 convictions.  At the age of 15 he dropped out of school and began his life as a career criminal.  By the age of 17 he became associated with a grifter named Arthur Tatro who had concocted a scam in which he, his girlfriend, Medeiros and his sister Mary all posed as members of the fictional American Rescue League.  They dressed in elaborate blue-gray uniforms which were very reminiscent of the ones worn by the Salvation Army at the time. They worked the streets of Fox Point- the Portuguese section of Providence and in nearby Fall River, Taunton and New Bedford soliciting donations from the  unsuspecting for their criminal cause.  On May 1st, 1920 the police caught up with Tatro and Medeiros.  They were arrested for fraud and impersonation.

When Joe isn't writing, he's coaching people to punch each other in the face. He enjoys ancient cultures, dead and living languages, cooking, benching 999#s, and saving the elderly, babies and puppies from burning buildings. While he enjoys long walks on the beach, he will not be your alarm clock, because he's no ding-a-ling.
Previous Legendary John Roberts to Perform at the Wamsutta Club
Next “How to Grow Healthy Kids” Campaign Utilizes Texts