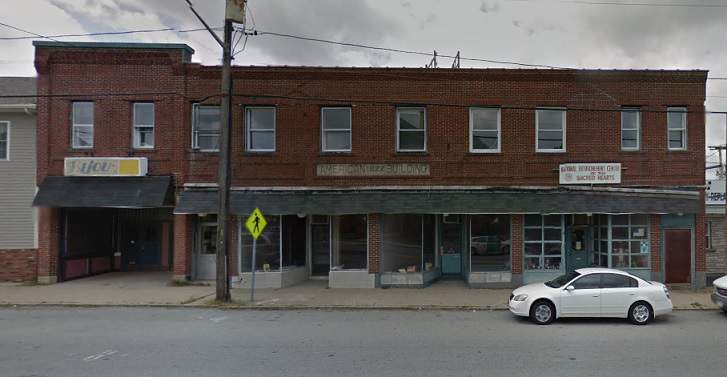 350 Main Street; 1922: The American Building
I saw many a flick at the Bijou Theater on 350 Main Street, Fairhaven, during its almost decade and a half lifespan. I recall there being quite a buzz and the word-of-mouth was that you didn’t have to drive to Dartmouth – Cinema 140 and AMC at the Mall – and pay outrageous prices for movie tickets and concessions, but you could stay in Fairhaven and pay “retro-prices.” Tickets were $2.00 and all items from the concession stand were $1.50.

While most people today remember the venue as the Bijou Theater, the building’s history stretches back to 1922 when the building was erected and dubbed the “American” building.”

The following year on January 12, the American Theater opened taking on the building’s name. The proprietor then was one E.D. Davenport who would also run the Rialto Theater on Weld Street when it opened in 1927. The theater’s opening night selections were three silent movies “Fun From the Press,” “Golf,” and “the drama “Sonny.”

The timeline grows a bit dark at this point. It’s difficult to tell if the theater fell into disrepair or just wasn’t popular enough to keep doing what it was doing. The next blip on the historical radar is when Harold J. Shore renovates the venue and re-opens in May of 1934 as the “New American Theater.”

Second Fire, Catholic Legion of Decency list, and the Oxford Theater
It is short lived however, and ends up under new ownership and re-opens again on October 11, 1935 as the Keith Theater. Keith’s was a popular spot for years to come showcasing a double feature with a cartoon intermission for the price of admission: a whopping 25 cents. Popcorn and candy? Are you sitting? 5 cents. I think I feel lightheaded.

On November 13, 1946 a 2-alarm fire caused by faulty wiring causes damage to not only Keith’s Theater, but many of the other tenants, which history lists as Keith’s Spa, the American Bowling Alleys, Martin’s Market, Pacheco’s Package Store, Melvin Press, and Pimental’s Pool Parlor. After repair, the theater opens as the “New Keith.”

In 1959, the Catholic Church had heavy influence in the area. Some of you dinosaurs may recall, the archaic Blue Laws, like the one that didn’t allow businesses to be open on Sunday.

Well, the church at this time had what was called Catholic Legion of Decency list. They knew what was best for you and banned those movies that they though would make little Johnny grow hairy palms. Curiously, some Disney Movies made the list, like “The Hound Who Thought He Was a Racoon.” “Porgy and Bess,” a 1959 musical based on a George Gershwin opera was another that made the list and was banned from being featured at the Bijou. People complained and the banned was lifted.

A second fire, suspected to be arson, occurs two decades later in 1965 forcing to the theater to close. We have a musical chairs theme…but with businesses! The theater would not return to showing films until 1972 when it re-opened as the Oxford Cinema under Weber Torres. In 1980 it was sold to Bijou Realty.

The Bijou Theater as we remember it!
The Bijou as most of us remember it, was opened after Dan Shea bought it in 1984. When Shea first opened he focused on independent and foreign films, as well as a few plays. Inside, there were hand-painted murals on a leatherette background featuring morning glories and stage walls had red velour – pretty posh!

Shea got out of the theater business in 1990 when Evie Baum and an unknown partner took over.

They showcased, cherry-picked popular movies like Repo Man, Ghost, Silence of the Lambs, Wedding Singer, Under the Stairs, and even a few plays. A particular favorite of “townies” was the Rocky Horror Picture Show.

While the theater was an old-fashioned venue, the 20 speaker Dolby Digital Surround Sound System reminded you that it was certainly updated. They had genuine ambitions to make the Bijou a success story and a premier entertainment destination – which it was for almost 15 years.

Sadly, on May 9, 2004, the doors closed and stayed closed up to today. An inability for one screen to generate enough was cited as the reason for closing.

The last time I heard anything about the Bijou was when it was listed as “For Sale” in 2009: $375,000 would get you the theater, 3 store fronts abutting Main Street and the 15 studio apartments.

When Joe isn't writing, he's coaching people to punch each other in the face. He enjoys ancient cultures, dead and living languages, cooking, benching 999#s, and saving the elderly, babies and puppies from burning buildings. While he enjoys long walks on the beach, he will not be your alarm clock, because he's no ding-a-ling.
Previous The South Coast Hot Jobs List – 26 December, 2013
Next Port of New Bedford Releases Study on East Coast Marine Highway Services