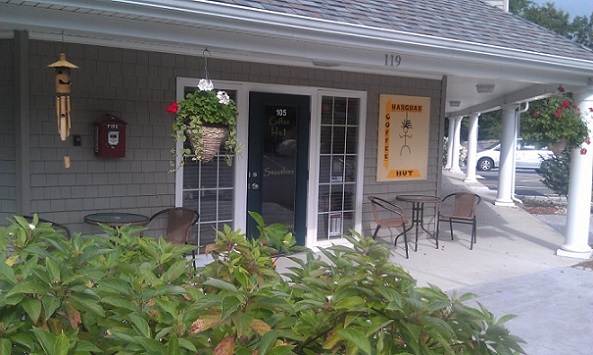 One of my new favorite spots is a 20 minute ride east into Marion, at 119 Wareham Road on the corner of Route 6 and Point Road. I took a random chance on the place a few months back after a nice relaxing ride to sooth the soul. It was one of those odd days where the weather was fantastic in spite of freezing temperatures for months. I figured at a bare minimum I’d have some half way decent food and potentially a good cup of coffee or preferably an espresso. Walking into the place, My girlfriend Rachael and I were greeted by a warm smile and a pleasant welcome from the proprietor. This genuine greeting was a portent of the things to come.

While the place was small, it was very inviting. It was decorated in a comfortable, welcoming way and made to feel very “homey.” There was pottery, knick-knacks, shelves, plants, nautical maps on the wall. It seemed like an an extension of one’s living room. I could easily take a nap here. There were two televisions playing the news, some soft music coming out of the P.A. and the counter was loaded with glass jars chock full of muffins, cinnamon rolls, cookies, brownies and other goodies. The cafe had a classic New England feel to it, but the vibrant colors added a hint of modernity to let you know it wasn’t an “old fashioned” cafe.

Initially I thought to simply order some old stand by. Often you can tell how great or poor a place is by how well they do the basics. If they can’t do the simple and easy, then everything else is sure to be crud. However, as soon as I glanced at the menu I realized that this was not an old-fashioned, typical cafe offering traditional fare only. First thing that stood out to me was a breakfast sandwich called “The M&M Panini” that was described as bacon, Nutella, honey, banana, cinnamon, sugar, on a croissant. I’m thinking this isn’t your ordinary cafe. Now, I have a palate for the exotic, odd and even bizarre, but wasn’t in the mood so continued to browse. I noticed the “Local” which was egg, linguica, red onion, and provolone cheese. The “Baby Huey” which was egg, feta, tomato and sausage. The “Big Paulie” made of egg, prosciutto, sausage, Provolone, and roasted red pepper. I was told that all the sandwiches were made fresh to order and that meant omitting, switching, or adding something. I like that.

Rachael settled on the Roast Beef sandwich made of roast beef, cheddar, lettuce, tomato, and horseradish mayo. I ended up deciding on the Cuban Sandwich described ham, mustard spread, turkey, Swiss and pickles. Having family in Florida that I visit every great once in a while, I had a yardstick with which to measure the authenticity and deliciousness of a proper Cuban. I also ordered and espresso, since it is my typical drink, but I was tempted to try the Vietnamese Iced Coffee which I usually can only find at Vietnamese or Thai Restaurants, or the Caramel Macchiato which is what I get if I pass through a Starbucks. As I headed to the table to await my meal, I passed by a shelf of books and board games, pried a Trivia book off so I could test Rachael’s knowledge. Maybe I could get her to bet that she couldn’t get 4 of 5 answers correct and therefore have to pay for the meal?

She wasn’t falling for the trick, so I just accepted that I was providing and got into “lamping” mode. Even though I was already liking the place, I had my doubts that a place out in Marion was going to make me a quality espresso and a proper Cuban. Heck, the Cuban didn’t even have to be proper, just close. After they first sip of my espresso, I realized how wrong I was. Rich, complex, with the right amount of crema. OK, now I’m sold and really looking forward to my Cuban sandwich. We have a real possibility here folks.

When the Cuban arrives it’s sliced in half and plated so one half is on its side and leaning on the other. At first sight I am glad that the cheese isn’t an inch thick and oozing all over the place. I love cheese, but in a sandwich I want it to compliment the other ingredients not overpower it. I feel I am getting one step closer to the real deal. I wrap my grubby little hands around a half and chomp right into it. The bread had a thin layer of crunch and crackle and the the rest of it was appropriately soft. As I continue to bite down, I am hit with a wave of juicy deliciousness. The pickle going down the center has a snap to it, the ham tastes like high quality ham, not the cold cut or bloated with sodium type that gets served up on Easter and/or Christmas. This is real ham. The cheese is as expected…enough to compliment the sandwich and not overpower. What a perfect combo. I was KOed. I was transported back to Florida at a mom & pop Cuban eatery with the sun beating down on my head. Man, I wanted to break out the sunscreen and prop my feet up on the table. In the distance I swear I heard a Rumba or Salsa playing faintly. This sandwich had no chance. I blocked Rachael out and dove into it.

Keep in mind, my intention was not to head there to write a review. I ended up writing this review because of the experience I had that first day, and the consistent experiences I’ve had since. Simply to enjoy my day and get some de-stress time. By the time we had gone a third time, a gentleman with a similar disposition was helping the woman behind the counter. Since he was equally as friendly, the four of us eased into general conversation. Eventually introductions were made and found they were husband and wife, Bill and Dina Quinlan. These people were genuinely pleased that we had patronized them and were returning. Just darn, good-hearted, decent folk.

In addition to the breakfast and lunch sandwiches, and the aforementioned glass jars of goodies, they have Linguica rolls, an assortment of wraps, old standards like Tuna, Egg & Chicken Salad sandwiches and more!

There is always a newspaper, some magazines, or a book to choose from. The name of the place is based on a chalkboard on the wall that has a Hangman Game and a word of the day. The aforementioned televisions are usually on and Bill and Dina are always asking if we’d like the channel changed. There are jars of Sprig herbal jellies like spiced Port Grape, Rosemary Citrus, Ginger Beet, and a few hot pepper varieties. The prices are in the normal to inexpensive range, even considering its locale. Organic and Fair trade coffees, as well as Indigo Swiss Water Decaf are available, and they proudly promote this. Also offered are Umpqua Oats Oatmeal, a variety of smoothies like Mango Madness, Strawberry-banana, and Wildberry Blast. Of course, Soy, Almond and Skim milk are options.

There is free Wi-Fi, out door seating once the weather improves and for those on a Gluten-Free diet or wondering about bringing your kids will find that you will be more than taken care of. The place is small enough that you will never be overpowered by the background noise of other patrons. You can bring your laptop or book, read, write or work without being distracted. While small, we have never not been able to get seating.

It is pretty common to have Dina bring out a complimentary brownie, bag of chips or cookie. Once we were completely satisfied with our meal, yet she convinced us that we wanted a brownie. 🙂 We were glad she did. Keeping congruent with this generosity they run a FREE coffee Friday where you can have a free medium coffee 7 am- 9 am. Yeah. No kidding! It is this attitude towards customers that would keep us coming back even if the food was average. The fact that the food is exceptional, simply makes it that much easier to return again, and again, and again, and again.

When Joe isn't writing, he's coaching people to punch each other in the face. He enjoys ancient cultures, dead and living languages, cooking, benching 999#s, and saving the elderly, babies and puppies from burning buildings. While he enjoys long walks on the beach, he will not be your alarm clock, because he's no ding-a-ling.
Previous The South Coast Hot Jobs List – 26 March, 2013
Next Community Blood Drive Schedule For April 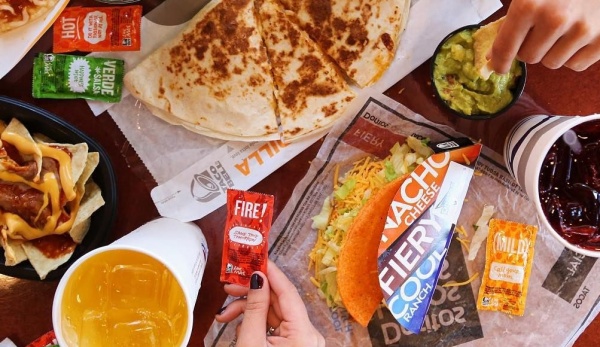 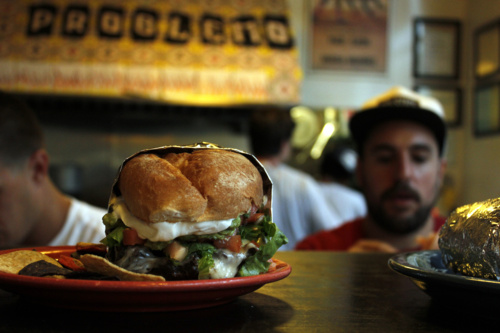 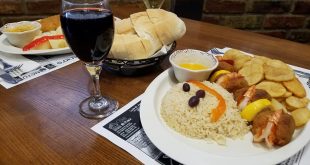