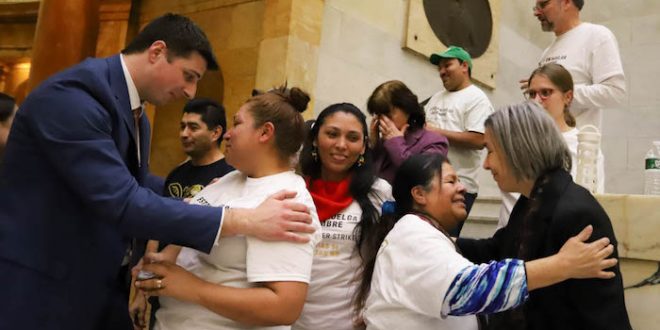 East Boston Rep. Adrian Madaro (left) and Somerville Rep. Denise Provost (right) celebrated with hunger strike activists in Nurses Hall on Wednesday, after the news arrived that legislation they were pushing for - to allow undocumented immigrants to apply for driver's licenses - was favorably reported from committee minutes before a deadline. [Photo: Sam Doran/SHNS]

Boston saw a “fairly large influx” of migrants over the summer that underscored the need for resources at the municipal level, Mayor Michelle Wu said Tuesday.

Casting Boston as “a city that is a hub for services,” the mayor seemed to chalk up some of the swell to the level of assistance available here, and drew a connection between the migrant arrivals and the city’s troubled Mass. and Cass area where substance-addicted people have flocked in recent years.

“We see the same, I think, situation — sort of parallel situation — when it comes to our opioid crisis at Mass. and Cass and the surrounding area, where the more services we provide, the more demand there is. And folks are coming for services and treatment from outside the state, all across New England, and beyond,” Wu said on WBUR’s “Radio Boston.”

While the city can “create the welcoming ecosystem,” it needs funding to support the sought-after services and the community groups that provide them, she said.

The idea that migrants are drawn to the Boston region because of its available services is a premise shared by MassGOP Chairman Jim Lyons, though from the other side of the coin.

“…[A]s long as radical progressives here in Massachusetts keep incentivizing illegal immigration by dangling privileges like driver’s licenses and welfare assistance, expect the influx to continue. Also, expect to pay for it all in the form of higher taxes,” Lyons wrote in a Sept. 16 fundraising email.

Wu raised the migrant influx in response to a question from host Tiziana Dearing about whether Boston could host some of the 48 Venezuelan migrants who were unexpectedly dropped off on Martha’s Vineyard this month.

She said the city would “love” to welcome “any families who are looking for work and looking to settle down,” before adding the Vineyard migrants “were not the first” to arrive in Massachusetts.

“Over the summer we have experienced in Boston a fairly large influx of migrant families from all different countries of origin and locations, many of whom have showed up in need of services in our emergency rooms and hospitals or otherwise. … And so we’ve had to expand our capacity as it already stands, and look forward to trying to systematize some of this, as we know this will likely be an issue for some time to come,” the mayor said.

The new arrivals result in “a lot of pieces that end up spilling over to local government,” Wu said, describing needs for not just funding but also a faster-moving court system and shortened timelines to process asylum requests.

During her hour-long appearance on WBUR, the mayor also touched on staffing shortages that are impacting two basic city government services — filling potholes and getting kids to school on time.

Dearing read a text message from someone named Tahir in Allston: “Ask her what exactly is she doing about the potholes? They never get fixed, even after calling them in to City Hall.”

Such staple services “are really what shape how you feel about your city,” Wu said.

She responded that Boston’s response times for issues like pothole repair are “incredible effective.” When Dearing pressed her for some kind of trackable metric, Wu described a desired goal of one to two days that “we would be very proud to see happening all across Boston.”

But, she added, the Boston Public Works Department is faced with short-staffing.

“We have about 50 positions to fill just in terms of the folks who are on that team alone,” Wu said, apparently referring to the staff section that deals with potholes like Tahir’s.

Wu called the open DPW slots “great jobs for local residents, where there’s training, there’s support, and the chance to move up through the career pipeline.” She asked the radio show’s listeners to connect her administration with interested applicants, or nonprofits interested in cohosting a job fair.

Boston, like some other Massachusetts cities, has also faced a shortage of school bus drivers through the COVID-19 pandemic. Gov. Charlie Baker last September activated National Guard members to help get kids to school in cities like Chelsea and Lowell.

Now two and a half weeks into the new school year, Wu said the Boston school system is still falling short of its target for on-time buses.

Traffic is a big reason those buses get held up, Wu said, but “staffing also has a lot to do with it.”

All the “official” bus routes have assigned drivers, she said, but the district needs a bigger bench because there is not much wiggle room if a driver takes ill or shows up late.

The mayor also weighed in on the month-long Orange Line maintenance shutdown that wrapped up at the start of last week.

Wu in August had predicted “chaos” would result from the shutdown and its commute disruptions. She lauded the T on Tuesday for completing all its scheduled work and meeting its deadline.

“Is the Orange Line commuter experience today, all of a sudden, what we want it to be? No,” she said with a laugh, adding that she sees “very long” wait times between trains.

But, the ride is “markedly better” and she thinks “we haven’t even quite experienced the full impacts of what was done.”