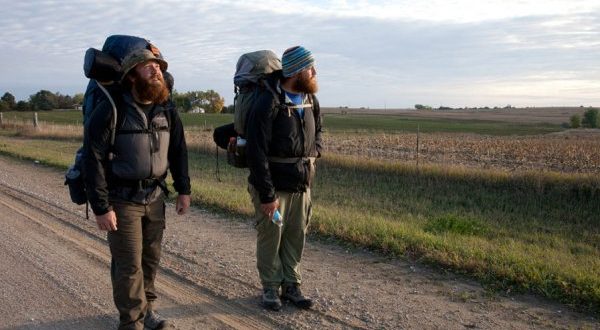 By Sean McCarthy for The Zeiterion Performing Arts Center

Description: The film follows two Iraq veterans, Tom Voss and Anthony Anderson, who struggle with depression upon returning home from service. Fearful of succumbing to the epidemic of veteran suicide, they seek a lifeline and embark on a 2,700-mile walk across America as a way to confront their inner pain. The film captures an intimate portrait of two friends suffering from the unseen wounds of war as they discover an unlikely treatment: the restorative power of silence and meditation.

It began as a quest to resolve their inner demons, but what also transpired was a greater faith in humanity and a significant perpetuation of a movement that is becoming part of a national conversation – “Moral Injury.”

“Moral Injury” is the main idea being highlighted in the documentary, “Almost Sunrise,” the story of two Iraq War veterans who walked 2,700 miles from their homes in Milwaukee, Wisconsin to Santa Monica, California – a trip that took 155 days. The trek featured Tom Voss and Anthony Anderson, a pair of veterans sensing that they were perilously close to ending their lives because of their combat experiences. The journey was a “last ditch effort” to help themselves, and it became a testament to the healing and restorative power of silence and meditation.

“Almost Sunrise” will be shown at the Zeiterion Performing Arts Center on Friday, June 1’st at 7 p.m. It will be followed by a panel discussion and will culminate with a walking meditation. All of the events are free of charge.

The event is one part of the Zeiterion’s Veterans Experience series which uses the arts to highlight the veterans’ experience. The aim is communicating to citizens what it means to serve our country in war, instill a sense of empathy and appreciation throughout our community and provide pathways for both healing and understanding.

Through the power of the performing arts, the Zeiterion aims to convey the veterans’ experience to an audience of civilians and to demonstrate how the arts can help trauma for an audience of veterans.

“Moral Injury” is an affliction that affects people from all elements of society. Although it is foremostly associated with military veterans, “MI” has come to be recognized by many other social communities, affecting an array of victims who must deal with their personal behavior that has gone against their moral code, regardless of their position in society.

Largely because of social media, the two were welcomed and assisted throughout their trip by numerous strangers who offered emotional support as well as a roof over their heads, a warm meal and a warm shower. The trip also served as a fundraiser for a veterans service organization in Milwaukee, raising more than $100,000. Dry Hootch of America is devoted to creating safe and sober social situations for veterans to be together such as coffee houses.

“The walk was done out of necessity,” Voss says. “We were really in a position where we hadn’t dealt with what we experienced in war in over 10 years. The veterans’ experience is usually that you get out of the service and then you try to carry on with your life, get back into school and get a job – do all those things that you’re supposed to do but you don’t have the time to reflect and really process ‘What did I just experience?’

“Over 10 years I just got to the point where I was seriously considering taking my life. I didn’t know how to manage it or get back into my community – I didn’t have someone to connect with and share these experiences with. It was all on my shoulders. This was a last ditch effort – I had to give it a shot before I go down that path of taking my life.”

The documentary was filmed by Michael Collins.

“I didn’t want to perpetuate the stereotypes of the wounded soldier or even the homecoming hero,” Collins says. “Those portrayals aren’t doing anyone any favors. I wanted people to hear from the soldiers themselves and their families to understand the complexities. We need to see them as humans when they come back. What I wanted to portray was that these are complex human beings like the rest of us and you can’t describe them by one dimension of their character and that’s where the healing takes place.

“This film is not just a focus on PTSD – there are already many films about that. I wanted to take the conversation a little further and talk about “Moral Injury” and how it is associated with guilt and shame as opposed to trauma and shock to the nervous system.”

“This is the first film that really tackles the subject of “MI,” Voss says. “It’s getting the concept out there. All sorts of people are drawing connections from the concept of having a wounded soul participating in something that goes against their moral code. This is really starting to resonate in a bunch of different communities giving depth to trauma. This film shows that vets are not the only ones going through this thing – a lot of vets isolate themselves because they don’t have anyone to share their experience with. I think it shows that there are men and women going through the same thing they are.”

Collins talks about making human connections with others.

“When you feel a connection to someone from a different community there’s suddenly a feeling that they become part of your community, that there isn’t a separation anymore, there’s a feeling that we’re all from the same community. As much as they’re taking care of us it’s our responsibility to do the same for them when they get home. That’s why I love making character-driven films because it gives us a very human perspective of an experience we might not normally have access to in your daily lives.”

Collins says that the film proves that we have more bonds than barriers.

“For me the opportunity to go across the country and connect with people from different ends of the political spectrum and realizing that we all have so much in common – especially these days when the common narrative is that there’s such distinct camps that people fit into – I experienced meeting people from all different walks of life from this country and that we have a lot more in common than we do differences. I saw all of these people come out and open their homes and communities to Tom and Anthony to help them was further proof that when people are given the opportunity to do something good we’ll all come together to do it.”

A large lesson that Voss experienced from the walk was that nature can help in ways that chemical medications cannot.

“This film shows that there are ways other than pharmaceutical medications to treat trauma. Focusing on meditation, yoga and other holistic practices and nature-based therapies can have a positive impact in life without having to be on a cocktail of prescription medications and just end up numbing and keeping all of these things down. There’s a lot of value immersing yourself in nature that most people don’t put too much stock into. Being out in nature and being exposed to the elements, slowing down and taking your time being in the environment has a really positive effect on your mental health.

“This walk allowed me the space to process a lot of the things that I had experienced while deployed. It was invaluable,” Voss says.

“This has been one or the richest experiences of my life,” Collins says. “I was able to witness two men who were really seeking to take responsibility for their lives and for their healing who were not willing to give up even when they were running into what felt like dead ends with the Veterans Association and other groups.

“I knew that I wanted this film to be hopeful,” Collins says. “I wanted it to end in a place that would inspire progress – to move towards solutions. It was such a blessing that we saw such a transformation take place. I think it’s important to highlight problems in society – something that would inspire action, not only for vets and their families but there were other paths for healing that maybe people weren’t aware of before, that there is always hope.”

The final installment of The Zeiterion Performing Arts Center’s

Location: Friends Academy (1088 Tucker Road, North Dartmouth, MA 02747)
All are invited on a contemplative walk and guided meditation led by Tom Voss and Michael Collins of Almost Sunrise. Experience the restorative, soul-nourishing benefits of expending time in nature, concluding with a guided meditation and breath work. All ages welcome.